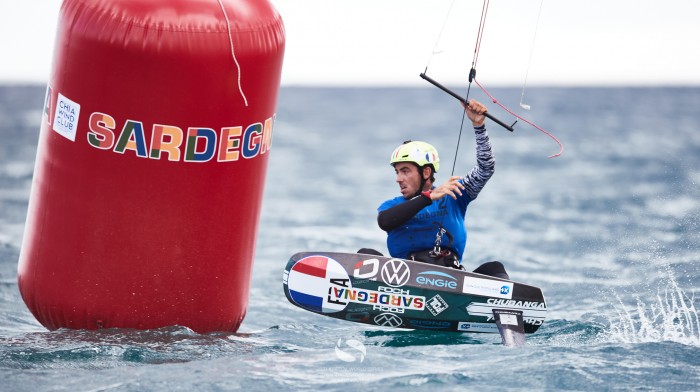 The French champion takes the Overall lead after the day 2 of IKA KiteFoil World Series' round 3 in Cagliari (Italy). Russian Taradin also did a good job, going up to the second position ahead of yesterday's leader Bainbridge. Calbucci (8th) is the best Italian, Newland “queen” among Women

Winner of Sardinia Grand Slam in 2019, Mazella claimed wins in three out of five regattas. Behind the World Series' leader, Russian Denis Taradin climbed the ranking after the demanding opening day, whilst Brit Connor Bainbridge went down to third position overall, after topping the Sardinia Grand Slam's Day 1.

In Golfo degli Angeli's waters, the wind breeze came up a little bit late, but then the race was spectacular. Third-placed in the opening race, Axel Mazella took advantage of his favorite wind conditions (13-17 nodes) to win seventh and eighth runs with a large advantage on his closest rivals, going up to Overall ranking first position. The KiteFoil World Series' leader acted then a thrilling head-to-head with Russia's Denis Taradin in the last two races of the day, ended with a victory each.

“After the first race, I decided to go first on the right side of the course and it paid a lot. Race after race I did the same thing, with great results, and the other guys tried to act the same tactics. The last races were really tight with Taradin” Mazella commented.

Russia's Denis Taradin gave life to a real crescendo, climbing position race by race, from the fourth one in Race 6 up to his first success in KiteFoil World Series' round 3, in Race 9. A further runner-up spot put him in Overall ranking's second position.

Connor Bainbridge's day 2 started with a ninth position before going back to usual performances, awarded by a runner-up spot and a continuous presence in the Top 5.

Italy's Lorenzo Boschetti took an astonishing third position in Race 9, ahead of his countryman Riccardo Pianosi. Eight overall, Mario Calbucci is the best-ranked Italian athlete in Sardinia Grand Slam's ranking after Day 2. “I knew I could be strong in this wind conditions, even if I couldn't predict to take the third spot. I've also taken the provisional lead in Race 10, before making some mistakes. Anyway, I had a good feeling and I'm pretty happy to compete with World's greatest champions”, commented Boschetti.

French Poema Newland re-affirmed leader among Women after the second racing day, ahead of countrywomen Lauriane Nolot and Jessie Kampman.

"I felt really good today, with 15 nodes it was good racing. For me, it was a tactical, funny and interesting race because the wind was shifting a lot. A message for Poema? We are close and I'm pushing hard” said Lauriane Nolot, overall runner-up but strongest performer among Women in Day 2.
Top