Patrick Hall from Fstoppers.com approached me last September with the idea of photographing some wakeboarding or kiteboarding in a studio setting. We ended up choosing wakeboarding and came up with this elaborate plan of ropes, lights, and water. Check out the behind the scenes video blog post for those that are interested here.. Behind the scenes video and let me know what you think. 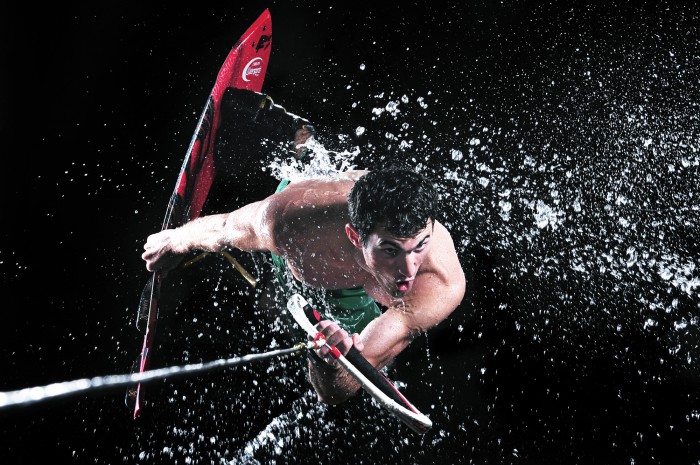 What are your thoughts and opinions of this idea? Is this selling out or could it actually have some merit as a photography style for wakeboarding or kiteboarding? Any ideas on how to make it better if we do it again?

Personally, i can't stand the idea of taking wakeboarding or kiteboarding and making it static like has been done in the studio shoot. It's sterile, static and whilst the images that were produced are certainly eye catching - they're fictional. As for a recommendation for a follow up shoot, i'd stick with trying to capture the true action as opposed to a suspended-gimp-rig setup in a studio.
Keep it on the water and get strobist.
Top


Aren't the majority of hi-end fashion mags & advertisements fictional as well? We're not talking about shooting for National Geo here. This is staging what the person can do on the water, but with more control over the output. I think this would be a great technique the manufacturers of accessories could use for their product line.
Top

The idea is interesting but don't limit your self to imitating the real world in a studio setting. With a static setup you could shoot some fun gravity optional shots.
Top

I think it's very cool!

But I can also relate to the art. It's not a real wakeboarding photo. It's more than that. It's wakeboarding art. I like taking photos and do editing, so I really appreciate these kind of photos.

How did you remove the robe without removing the water splashes? Really a nice editing job

Thanks for posting the article and the video. I think it is clear that many who view this will have the "purist" response of not really liking it because it is staged. That is very logical and it makes sense that these shots wouldn't be featured in a hard core mag dedicated to wake, most likely.
But, all that matters is what the people in other industries (non-wakeboard, maybe clothing ind.) might pay for and use such images. I think you have done a good job of creating images that may be used in non-purist mags. Nice going. Also, if riders are willing to be tethered to some lines/ropes and "hang out" to get a pic, I think that in itself says something about acceptance.

How did you guys keep from destroying your lighting equipment with all that water going everywhere? I would be weary of electrocuting myself!!

I am also curious how you removed the harness lines post-shoot, without screwing up the look of the water.
Top
Post Reply
6 posts • Page 1 of 1