Strutless kite in development on Maui

Ha ha yeh I liked your wind description as well. Might be some marketing potential in that!!

Will await the vids in more high powered situations. Be awesome if you could get them in the hands of the guys really pushing the limits and/or just some decent local riders.

I think that is what is missing really in a lot of marketing approaches. Been around for 13 seasons now and I just love watching and reading reports from crew with no vested interest. This is what epic have done well me thinks.

Yes I feel a lot of us are eagerly awaiting this development as let's face it, the last few years have seen very little development, just finer nuances changed. This is really a quantum change in a way.
Top

hi guys
i really love the concept of the kite and video!! Amazing development
i wish i could give it a try, but living in milan italy may be quite hard

One question: how are you going to cope with the trailing edge deterioration?
when on the beach, this kite will flatter like crazy
i know the airush one, a similar concept of 2 years ago, had similar issues
i 've flown the One and was really fast and powerful, but you just could not leave it on the beach.
It was a kite suicide

tautologies - your dog blew away? Crap!

mike dubs - Thanks for supporting my lack of confidence in numeric windcharts! I get your point on white. Wasn't a premeditated decision. Everyone was digging the white prototypes so much that we didn't have a choice. Its such a blank canvas, how about a program encouraging riders to graphic themselves? Get out your tie dyes! Would that solve the color issue? Wouldn't a 9 have been too obvious and spoiled all the fun?

Westozzy - Windcharts sound like "marketing" to me. Wasn't that the anti-marketing? New video is uploading as we speak, but don't think you'll be stoked - no "decent" riders. Just more goofing around from me, family and friends. I agree that testimonials from unaffiliated riders is where its at. Since that's what I thought this forum is for, I try not to butt in too often, waiting until there's several questions lined up. Thanks for calling it a quantum change - Sweet.

gvironda - Thanks for the compliment. I've had requests this week from Italy, so maybe you'll see the gear around soon. Regarding the kite you compare it to, outside of a low/no strut-count, I believe they are quite dissimilar. I ask riders to make up their own mind regarding performance. As for the durability question, there are a couple ways to consider this. When sitting on the beach, struts hold the canopy up in the wind, where this kite sits much flatter. When in flight, struts create an uneven trailing edge, often fluttering between wingtip and S1. This kite is considerably less prone to flutter at the TE as there's even tension from wingtip to wingtip. (On an unrelated note - this is a fundamental part of what makes its steering character so direct.)
Top

Another point about flapping, it must take much less time to pump than a 5 strut kite, so why not let some air out of the LE when not riding, save the worry?
But a white cloud for me will get dingy fast I fear.
And no 9?
Not to be cynical, but there you have some sales to this year's customers, next year... even if their kites are still white!

And that could be a good thing for the riders and the company!

ahh, nice waves out there...
Top

boardriding maui wrote:As for the durability question, there are a couple ways to consider this. When sitting on the beach, struts hold the canopy up in the wind, where this kite sits much flatter. When in flight, struts create an uneven trailing edge, often fluttering between wingtip and S1.
This kite is considerably less prone to flutter at the TE as there's even tension from wingtip to wingtip.

I agree, that should not be a concern since the kite sitting flatter in winds on the ground,
probably more like one of my old Ultra Flat with flexible In-Fill Panels.
I really liked it that way without any tension on the canopy

PS: Edited, since I found the appropriate pic 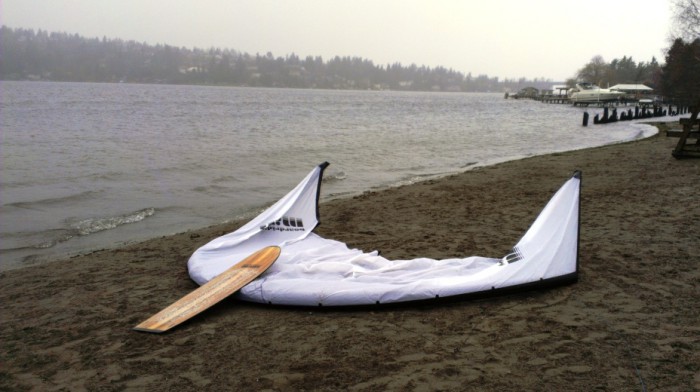 What sort of line lengths are you recommending for the larger Clouds?

Now that you are going into production, it would be a good idea to give details of what bar is required.

It looks like the kite bridle is a bit similar to a Cabrinha bridle, so it might depower onto both front lines?

Is it designed for a bar with all lines the same length?

Bar width and throw required for each kite size? Also possibly the details for each size on what length of flag out line is required?

All kites tend to have their own little tweaks that make life easier.
eg. on the Crossbow IDS, it works better to drop the kite to the side of the window onto the water when you have finished and it flips over into the parked position for easy winding of the lines onto the bar.
Different kites suit different drift launch or landing techniques.
So it might be a good idea to make a video to show how the kite launches, lands and anything that's different about the way its set up and the bars you use.

I think a kite made from one pattern or color of material is a good idea in terms of repair and this kite should be cheap to maintain, but I think that it would be better to choose a color or pattern that would not show dirt or repairs so easily.
Top

Can you list the aspect ratios of your different kite sizes?

I hope you’ve got yourself a good patent! Much as I hate the way patents are abused by multi-nationals, it’d be nice to think that you’d be getting something out of this for years to come.

In the short term, I think you’re going to be selling these things as fast as you can make them. But once the bigger boys start bringing out their cloud-inspired models, sales might be a bit more difficult. You might not want to be a big player (really can’t see why you would want to be) but it’d be nice to think everyone that used the concept was paying you royalties. Nothing outrageous. But enough to give you the financial freedom to keep tinkering with your designs, without having to worry about sales figures. And I just can’t see that happening without a patent.

But, by the same token, getting the patent lawyers involved would be a major blow to the mojo. Whether you have or haven’t, do or don’t, I hope Karma looks after the business side.

It looks like an awesome concept, and, like most great ideas, seems so obvious in hindsight. I’m sure there will always be a place for struts, but it’s hard not to believe that every manufacturer won’t have a strutless model in their line up in a couple of seasons. It doesn’t even have to be a great kite – the light weight and simplicity will sell it.

But, it sounds like it is actually the real deal. That’s a bonus.

I’m also very impressed with the way you are responding to everyone’s comments. And particularly not trying to over-hype it. For example downplaying comments about its lightwind potential and pointing out the difference between the ability to stay in the air vs usable power. Love the wind chart. Kind of takes the piss out of the other brands’ attempts. (Why hasn’t that gone on the website?) You come across as extremely genuine, open and honest.

That’s even more refreshing than the design.

Best of luck with it.
Top

I love the concept and hope your kites are a success but won't make up my mind until they haven't been tested here in Tarifa .

In course of all these years I have seen so many " pimped to death " kites fail in a catastrophic way when the wind blows 15/30 knots topping 35 on a normal day here in Valdevaqueros .

No wonder all mayor kite brands have test centers since 3/4 years here .

* besides of the SS Link or the Naish shockwave both from 2007 < to name a few > which even on thermal winds used to be crap ...

Hope to see one around soon ...