When I herd Switch said they were coming out with the V2 version of the Combat I was a little concerned. How were they going to improve on what I felt was pretty much the perfect C kite. I am super stoked to say that the only two things they did change were exactly what I thought needed changing. So of course it makes me feel good that my thoughts on what needed to be changed were in line with the switch R&D team.

1. No cam battens- Lets face it. Even though it makes for a super stable feel and great turning, a stiff rod in a kite that gets slammed over and over again will cause damage and fail. Cant really tell the difference without them in there so nice work on keeping the same feel without the battens.

2. Faster turning speed- I got the 11m and it is my main kite because of the typical wind speeds where I ride and my weight. Definite improvement in turning speed. It doesn't turn like a 9m but is a lot quicker and more responsive.

Other improvements- More pop when unhooked. Did some unhooked tricks with the kite and got way more lift than with the V1. Had to keep the kite closer to the deck which to me is a +. Always had to keep the V1 a little higher to get the pop and air time I needed. Bigger air hooked in too.
Lag time and stability. It's not that the kite has more lag time just better lag time feel and better power at the end of unhooked tricks. It was easy to out run my V1 on unhooked tricks and there was almost too much lag. I would have to wait sometimes for the kite to power back up. Might just be that the kite sits a little deeper in window but there is just the right amount of power to keep you going after a big unhooked move.
Relaunch. When I crashed the kite it wanted to relaunch instantly.
Still goes upwind great.
Big pigtails on LE.
Different attachment points on LE. Has two points of attachment on LE. One at the traditional spot and a new point that is in on the LE for less power. Haven't tried it out yet but will update review when I get a chance.
Kite has a great look and a super beefy build. Thick material and bumpers where needed.

All in all Switch did a great job on the V2 of the combat.The things that need improvement got changed and the things that didn't got left alone.
As always if you want to demo this kite or any of the Switch kites just look up on the switch website who is a team rider close to you for a demo.
Top 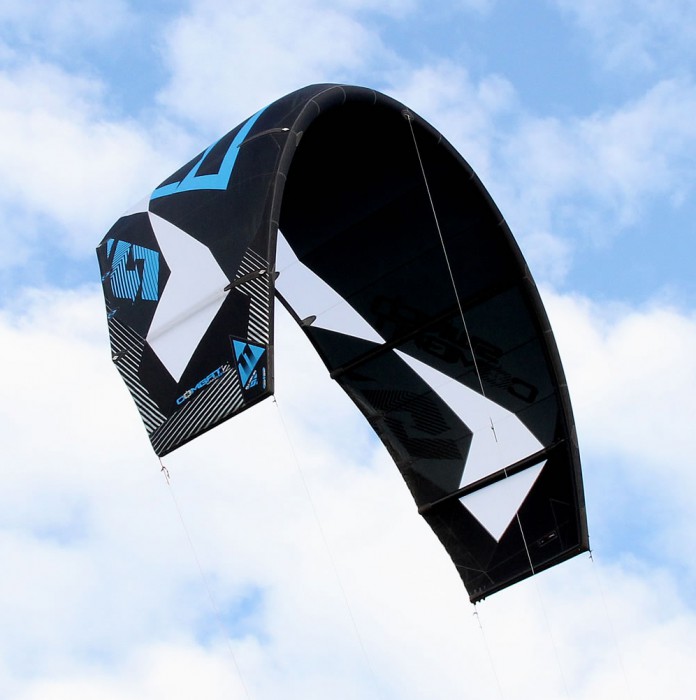 Got a chance to fly this kite 4 line. Even though switch states that the kite doesn't perform well without the 5th line, I found it to fly fine. When I put it up in the air it looked like an old fuel or BFK. It actually performed kinda like and old c kite which for me was fine. As A bigger guy I like the grunt that comes from a 4 line C. It jumped good,rode unhooked good,and had nice slack after tricks. The fifth line is there to keep the profile in gusty conditions and help it go upwind. If you surf with a c kite than 4 line is fine. Felix prefers the 7m Combat unhooked to surf down the line above all the other Switch kites. Not sure I would try bigger than 11 on 4 lines but I had fun. For down winders,surfing or steady flat water I don't see the need for the fifth. So all you folks who don't like 5 line C's I think the combat v2 xxx fly's fine without it on the smaller kites. Hit a team rider up for a demo and check it out.

Oh yeah and Marc Jacobs is tearing it up on PKRA tour on this bad boy. You know your curious....
Top
Post Reply
4 posts • Page 1 of 1