Arcsrule wrote:I don't have a foil yet. They're hard to find. cheapest I've found so far is $2200 plus shipping. That's a lot of $$$ for something I've only seen in movies! The real problem I see for me is getting out in the surf. my wind is normally dead on and I can't wade out to chest deep now because of the kites lift. the new HYDROFOIL forum Toby put up is going to be a great help in figuring this all out.

If you got surf, and really light wind (below or max 10 knots), and dead onshore wind - it is maybe not possible is my experience

But if you have "normal" winds, or no surf then 10 knots is sufficient, you can bodydrag with your board under one arm, out where it is deep.
So straight onshore, even with some surf, is possible - as you just angle the board perpendicular when a breaking wave roll towards you.

The first time out, when learning, you should only ride in sideshore (or sideon), as you will go downwind.
If not possible - then bodydrag a few 100 meters out upwind, with the board, before trying to ride.
But as soon as you can "ride" for even a short distance, you will mostly go upwind - and have to drift to get back to shore the first times

The problem in dead onshore really low wind, and a bit of surf - is that you might not be able to bodydrag out in deep water

To bodydrag you have to be able to keep your kite in the air quite "safe" - and if sub 10 knots and a bit of surf, this might not be possible.

But when "out" - and you've learned - you will most likely be able to ride in extremely low wind, if you just got sufficient power to get up and foil, the rest will be no problemo because of the apparent wind, and no drag

As I am still a "beginner" in Hydrofoiling - so it is great to be able to share all experiences, and what to and what not to do - just like Bracuru (respect).

So will illustrate in pictures what I meant with above

Out in almost dead onshore winds, and 3-6 foot waves, and sandbanks.

A lovely autumn tuesday with warm low sun this evening after work. 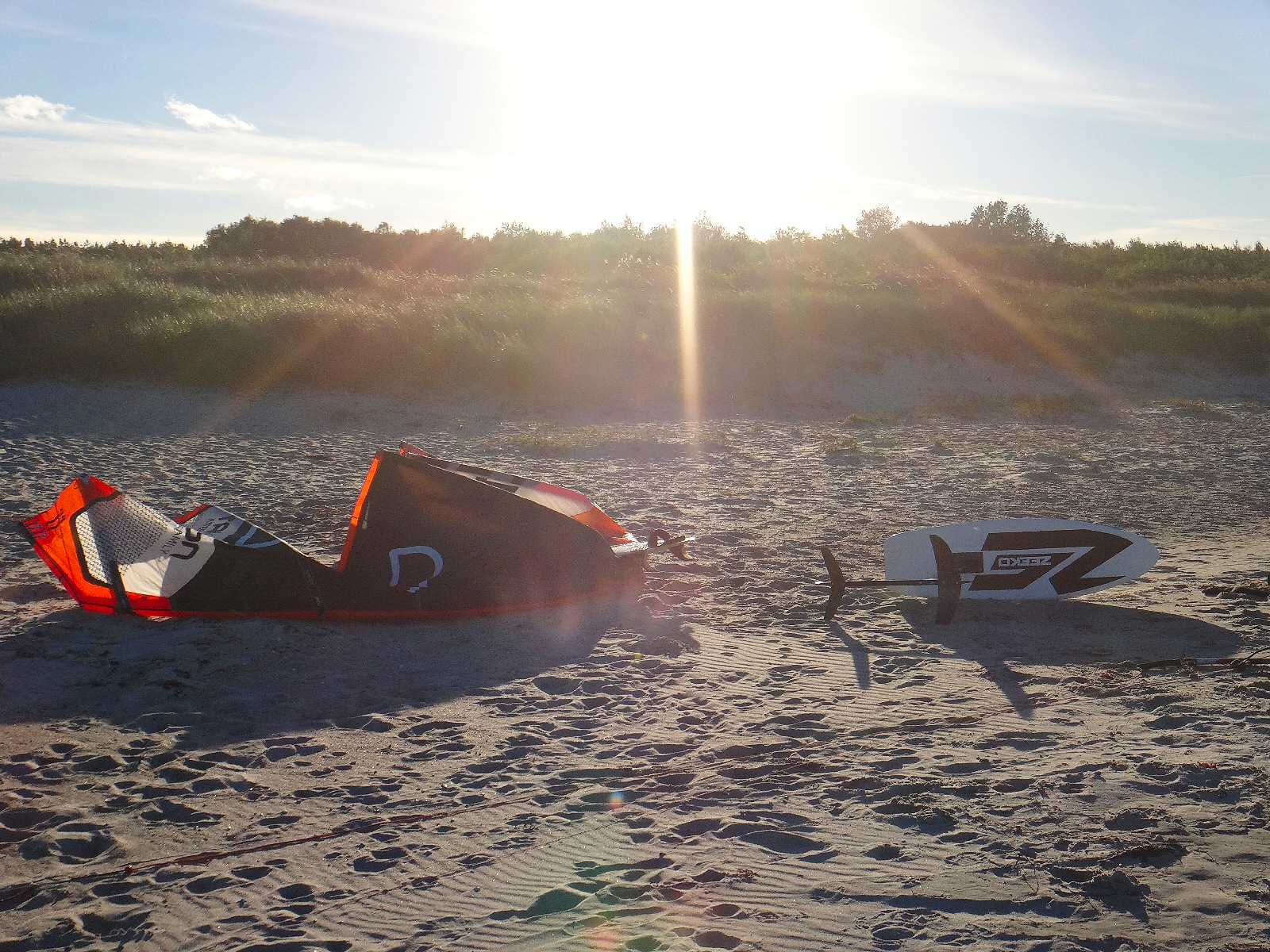 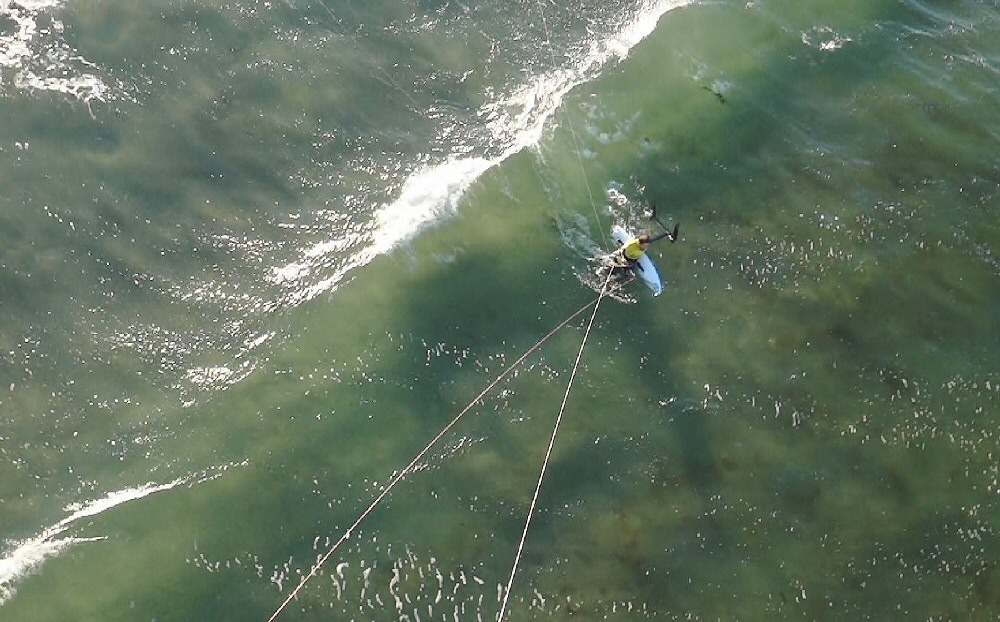 When you can not walk, just over waist deep usually - you bodydrag with your board diagonal to the wind (the board helps A LOT on your upwind angle) 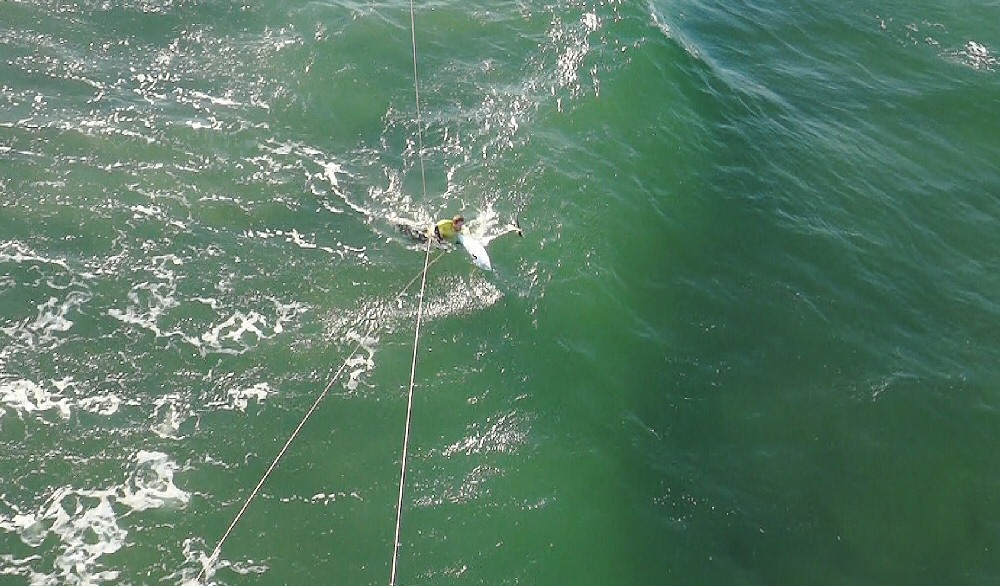 And when a breaking wave approaches - even smaller ones like this, you angle the board perpendicular into the wave 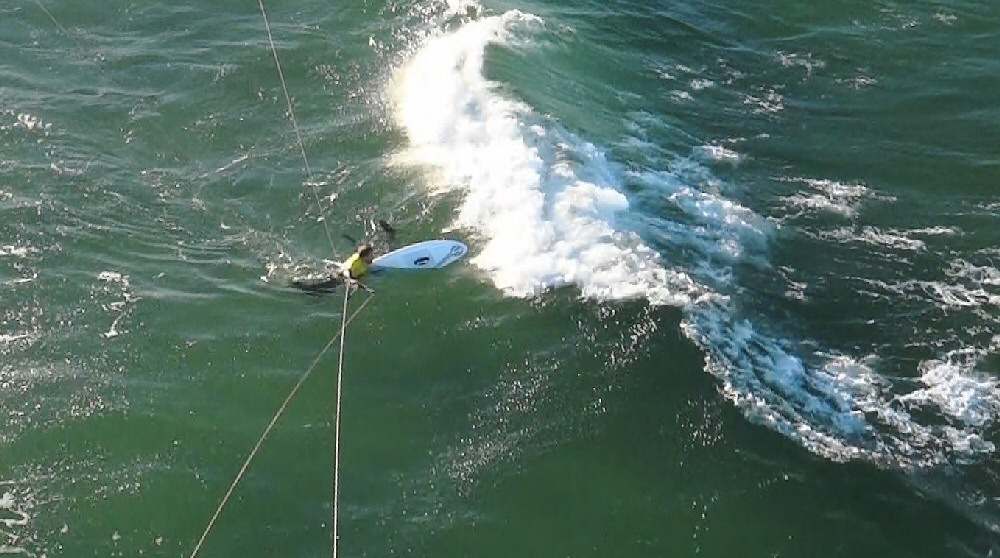 And VOILÁ, you are conquering a breaking wave ! 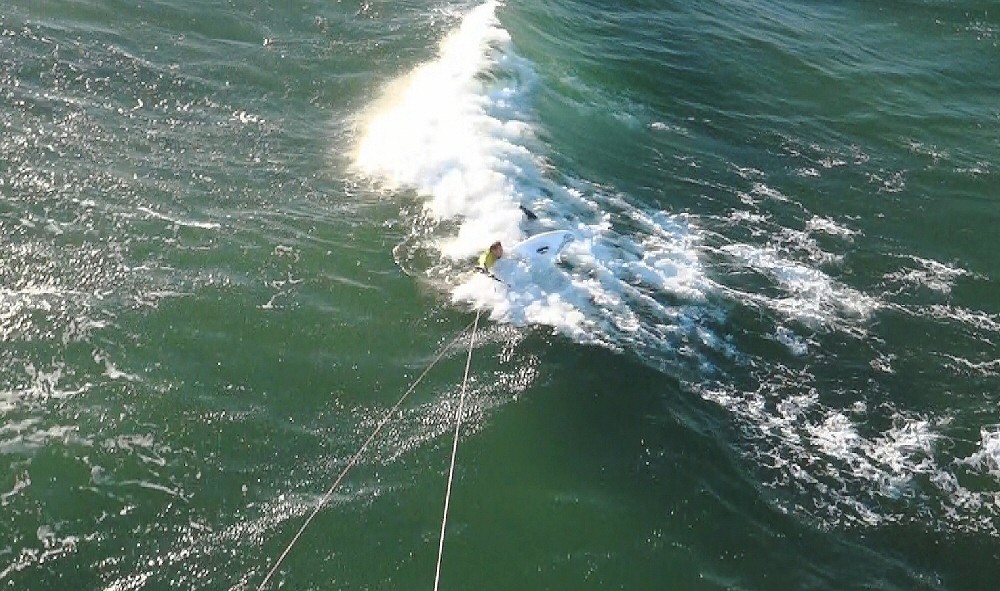 When out and riding, you will be able to ride in really big waves, no problem at all.

Here, up foiling before a wave 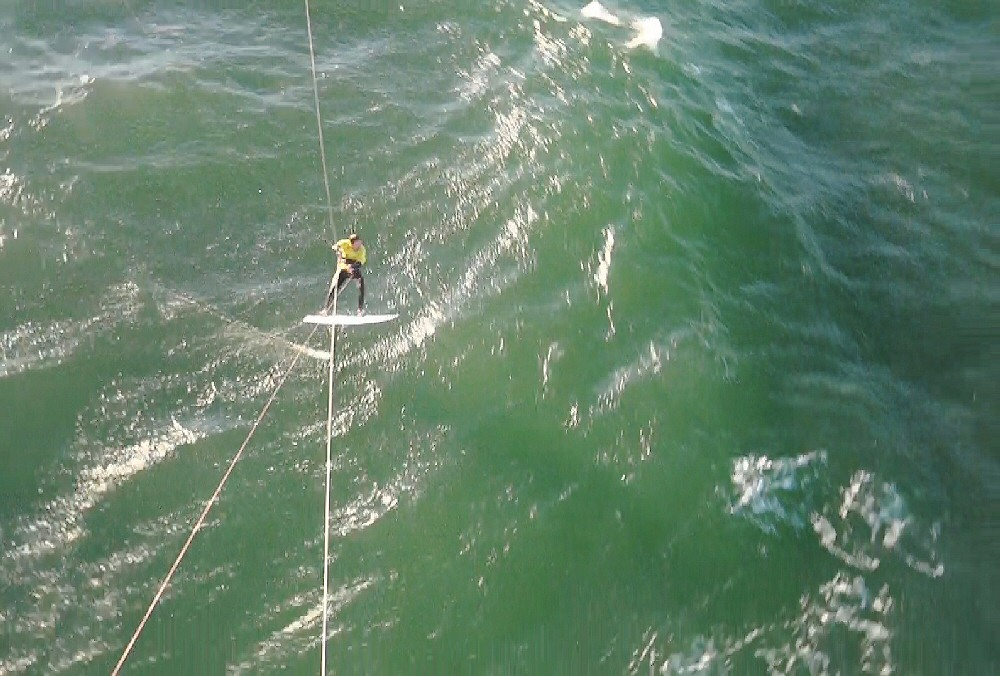 And when going through the wave, the foil just passes without any change or resistance - as you can see - it just sits deeper so you dont even feel the wave !!!

If waves are even bigger (thus wider), the foil will go a bit up when on the wave, and down after the wave of course - so that is why you can ride in really big waves actually, without even thinking about it.


After this session, I went out on my waveboard to have some fun in the waves, as eventhough onshore you can still have a bit of fun in 5-6 foot close waves like it was at this spot today 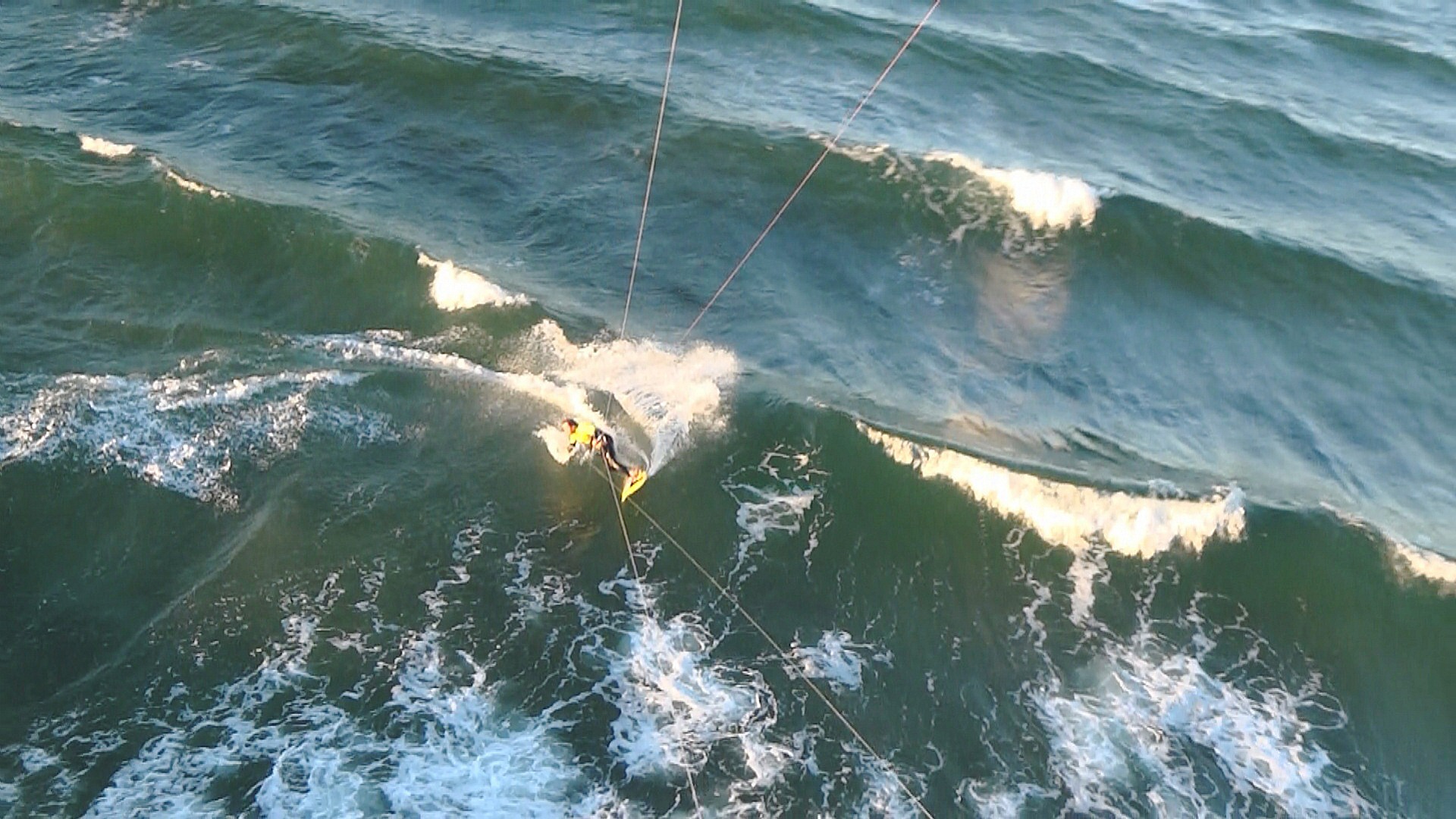 you don't look like a beginner! I'm trusting your word and experience. I think I'm going to order a Carifino

So in relation to your coastline what direction was the wind ?

What was the wind speed in knots riding on Foilboard....also do you enjoy how quiet it is when you ride

Nice photos by the way
Thank you
Top

Arcsrule wrote:you don't look like a beginner! I'm trusting your word and experience. I think I'm going to order a Carifino

Thanks - I take that as a compliment

The good thing is, that when you have been learning many times before (flying, surfing, windsurfing, kitesurfing), you know how fun learning is - and you can enjoy it, eventhough you also swear a lot in between when it goes totally wrong

Still not able to jibe nor tack really....

But it will come

The point with my pictures, is to help others totally new and starting out, so they dont have to learn my discoveries all over again the hard way

So in relation to your coastline what direction was the wind ?

What was the wind speed in knots riding on Foilboard....also do you enjoy how quiet it is when you ride

Nice photos by the way
Thank you

The size used on my waveboard was an 11m2 fast "wavekite", that got huge windrange but not that much low end, so maybe comparable with a 10m2 typical kite.

But on the foilboard I took a 7m2 (wave)kite, which was sufficient

Could have taken a 9m2 too, but I had the 11 up in advance for my waveboard, and the 7m2 was half pumped (struts only) because it has rained the last time out - so took only a few pumps to rig this one

Dead onshore is of course very close to 90 degrees, I would say 85 to 95 could one reasonably call dead onshore.

Windspeed in knots ?
Difficult to say, maybe around 15 knots ?

Do you mean measured in free wind on the beach, or the standard in 10meter height ?

No matter what, I dont know this very day...
Much easier to say that typical average waveriders could be out on 10m2 kites and it was okay - sometimes you could barely go upwind, but most of the time it was okay (and bigger sizes are hardly ever used on waveboards really).

One thing is evident though, that on my foilboard, I use the 10m2 (11) in really light wind, in just sub 10 knots, where it excel !
So you can go one to two kitesizes down if you wish

On a freeraceboard I would use a 13-17m2 kite in this wind, maybe even longer lines, and on a waveboard or TT I would not be able to ride at all of course, as you need 12-14knots before anything is happening in waves for real with a 10m2 kite...

HI, if your foiling in these conditions, i have to tip my hat to you. you have a lot of passion and i admire it.

here is what the best way to manage this situation. hopefully your kiting with a friend. if so, he can take your board out
and you body drag from the beach. i do this sometimes. it sucks to go out with your board in hand, waves, and onshore wind.

if your not able to have a friend help you.

grab the nose of your board and try to hold it so that the foil is half way up. then do your best to make it into deeper water, say chest deep.

then give it a go and run sides ways with the shoreline to gain some speed, thereafter your foil will turn into the wind and you should be up wind or at least heading
away from the shallow waters and beach. good luck. if i can be of any assistance just reach out. keep up the good work. Mango Carafino
Top


The point with my pictures, is to help others totally new and starting out, so they
dont have to learn my discoveries all over again the hard way

Because i can't bend my SS ankles on my prosthetic(s), the only way i can get
the straps of my surfboard on my fake feet, is to turn the board sideways with one
hand while flying the kite with the other. Then slip the front foot in and apply a bit
of water pressure on the board with the kite, while i slip the other fake-foot in
it's strap.

Can you hold your board sideways with one hand while that long Hydrofoil
is attached ; or does it want to Sink, making it Really difficult ?

Ps:
I changed my previous post because I see why hydrofoils are so expensive .
It's Not the materials and time to build it your paying for, it's the time involved
to design one that works, and the molds they come out of that is the expensive part !!
Top

Bille wrote:I changed my previous post because I see why hydrofoils are so expensive .
It's Not the materials and time to build it your paying for, it's the time involved
to design one that works, and the molds they come out of that is the expensive part !!

I have to admit this is the worst wind direction for launching.

It happened to me in Belgium that I could not kite due to dead on onshore winds reaching 8-9kts. I could not pass the breaking zone on a 110cm twintip board even I felt enough power in my hands created by 13m kite.
In the meantime I learned to launch a foil from shallow waters and so far no problems with onshore winds.
Top
Post Reply
10 posts • Page 1 of 1