I'm the guy that created the drawing up above. It is based on the design guidelines of a guy on the Frenchfoil forum called Franckite - all credit to him and the guys there who have helped me lots. If you want to learn about foils use bing translator or learn how to read French-all the info is there.

I wouldn't say it will make a great foil because I haven't finished building it!- front wing is done, rear stabiliser get's laid up tomorrow.

If you're thinking of making one-think carefully because it is a lot of work-for each part you have to make a plug by hot wire cutting foam, a former table, 2 mould halves, and then the part. A lot of hours.

The airfoil shapes are hydrofoil specific - from memory Eppler 817 for the main wing.

I've attached the PDF file from above. Can't vouch for it actually working yet!

Thanks Phezulu1 for the additional detail.

Is this your first build or did you start with a more simple design?
Do you have any pictures of your progress?
Did you draw this using cad and if so would you consider sharing your source file?

Peter_Frank wrote: Just like an airplane is never symmetrical - it will never be very performing if it was

Peter_Frank wrote: The foils are not "plain straight" either - most have changing AOA out during the foil section (wash out), just like airplanes, for stability and agility.

for the same effect maybe it´s just easier to start with a wing with an eliptic shape platform, think spitfire, instead of choosing a different shape and then having to play with the AoA along the span (something that would require a CFD program to know what one would be doing..)


NACA has numerous foils optimized to operate at certain Reynolds (function of velocity and viscosity if I remenber right), but I do not know enough to just go there and pick 1 that would make sense for you guys


Think you need Spork jumping into this topic..

There are a huge number of additional aspects of this, than what most think.

But a symmetrical airfoil is only used in order to ride upside down, meaning it is bad both in normal flight and upside down, no matter what - a compromise you have to take on cost of performance.
Just like a TT, which can never reach the potential of directionals, because it is equally bad at both sides.

The faster you ride, the closer to a symmetrical foil you can have - but if fully symmetrical, it will never perform well

Washout has three purposes in fact.

The major is IMO to avoid tipstalling.

You can also use it to reduce induced drag, at low AR wings, yes.

And last but not least - if you have a swept wing, washout will add stability - and you could in fact ride without any tail wing if you wanted.
Not as performing though....

A spitfire with its elliptical wings is VERY prone to tipstalling, thus it was one of the first to use a lot of washout in order to avoid this.
But still a major problem in R/C model spitfires

Above is simple "aircraft" knowledge.

But when talking about a foil, you got a bigger number of situations:

When the foil reaches the surface, and is about to ventilate (stall), you can make this "easier to recover" by having a curved outline (negative dihedral) and washout, as the center might ventilate, but the tips are still in the water, and with lower AOA so they dont stall.
Just some thoughts, but many others present.

Regarding turning - the dynamics of a foilboard, there is a lot more aspects added too - a ballpark of its own, just like a kite and turning and the dynamics are not "simple" at all

I actually understand why foils are expensive, no wonder and makes sense !

The R&D for one.
And understand if Carafino is pissed because others are doing the same now, after a few has done all the basic work and testing and expenses.
On the other hand - if you dont have a firm patent, it is only natural that a good idea will evolve into many brands, and some will be able to discover new sides (like racing) and really get these aspects finetuned to perfection

This competition is a bonus for us as users

And nothing "odd" about this - the same goes for every other industry, windsurfers, surfers, cars, etc.

So I dont think badly about those making the same product, and reaching new performance borders !

Sorry, a bit of a detour maybe, just my thoughts

hi Peter, agree with what you´re saying, except that washout is mainly used to avoid tip stalling


Peter_Frank wrote: A spitfire with its elliptical wings is VERY prone to tipstalling, thus it was one of the first to use a lot of washout in order to avoid this.

did not know this, probably the plane was too prone for tip staling and they had to find a compromise

So still believe wash in/out main purpose is to get a rectangular-ish plataform, more friendly from a manufacturing perspective, and then playing with the AoA along span to "fake" a more ecliptic distribution (thus less drag).

But guess both things are interconnected


In any case i understand tip staling in a aircraft not a good thing, you got the controls there and all that. i wonder if it is a big of an issue for a wing to be used into a kite board

Washout has three purposes in fact.

The major is IMO to avoid tipstalling.

You can also use it to reduce induced drag, at low AR wings, yes.

And last but not least - if you have a swept wing, washout will add stability - and you could in fact ride without any tail wing if you wanted.
Not as performing though....
...

Washout on an airplane wing :

A) Washout works real Good at LOW speeds, because it will ask the Root, (center) of your
wing to stall First, then progress toward the tips Last, so you still have control.

B) Washout Sucks at High speeds.
The faster you go, the more molecules of air you have moving over the wing, so the more
stability you get ; eventually you go So fast that Ya don't need the excess stability the
washout is producing. Now you have Drag slowing you down.

C) Washout Doesn't give your More lift for slow speed flying, it ONLY gives you more stability.
The wing will actually fly Slower if ALL the wing is flying at near the same AOA, but when the
stall brake does occur, it will be Violante and happen all at one time with little warning.

Reflex is when you turn the trailing edge Up a bit ; like an aileron when in the up position.
This actually Lowers the AOA of that airfoil section. Draw a straight line through the
Leading edge at it's stagnation point and the Trailing edge to see the AOA change
from a section without the reflex.
Take a quick glance at This, to help you picture in your head :
https://www.google.com/search?q=reflexe ... =898&dpr=1

Reflex won't yield the same stability as washout at Low speeds, here
the washout is the clear winner.

Ps :
i got a cold Beer for the first person who can find a mistake in
the theory for the aerodynamics in this explanation. I learned the above by tweaking
my rigid-wing while competing in ACRO, & i was fairly good at it ------------------ but it
"is" me posting , so ...

Yes, it's my first hydrofoil. Built lots of boards before, never anything like this. I've never even seen a hydrofoil, never mind ridden one-so this is going to be interesting for sure.

The DXF file and SAT 3D file is attached. I make no assurances that any of it will work!! I didn't really spend any time knocking the rough edges off the model and trying to model all the blend radii or rounded wingtips - figured it's not worth it as it will all be hand shaped anyway

I'll try and post a build thread when I'm done - assuming a successful outcome. There are some very good build threads with good photos on the French forum.

The state of foil development at the moment reminds me of how it was when kiting started-every one was experimenting and helping each other out - used to get guys like Ken Winner posting on kite forum with useful information.
Top

Sorry, it seems you can't attach DXF or SAT files to a post
Top

Thank you Phezulu1 for posting the more detailed drawing. It looks like the plan is a very good high Aspect Ratio foil. If you can email me the files iheli@hotmail.com I will try to post it
Top

Everyone told Me that i should learn on a Low AR foil ; so
i need plans for one of Those.

Bille wrote:Everyone told Me that i should learn on a Low AR foil ; so
i need plans for one of Those.

Out of the 4 foils that I have, the average area of the front foil is approximately 1 square foot,
The width range from 16 to 24 inches. My home made titanium foil is 24 inches wide wide. I first tried it without the winglets, and it was not stable, so I bent the tips and it is more stable. 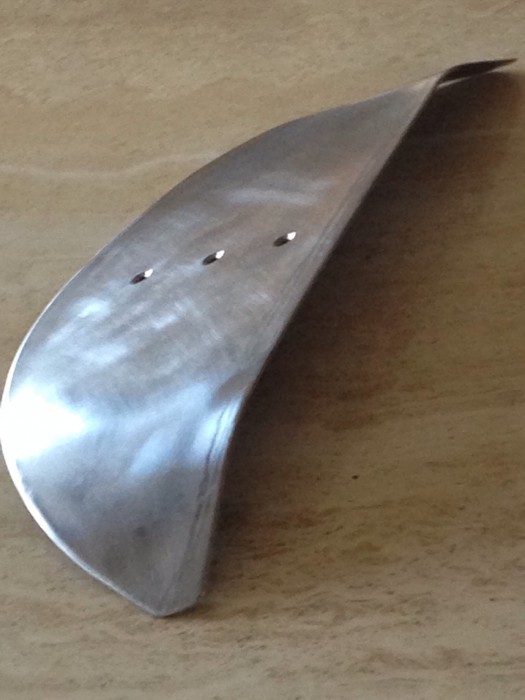