I have ridden a sample of the rocketfish with the new foil and 14mm alu mast.
This kit is very beginner friendly but yet will be easy to upgrade to much more high performance with a new set of wings given the thin alu mast profile. 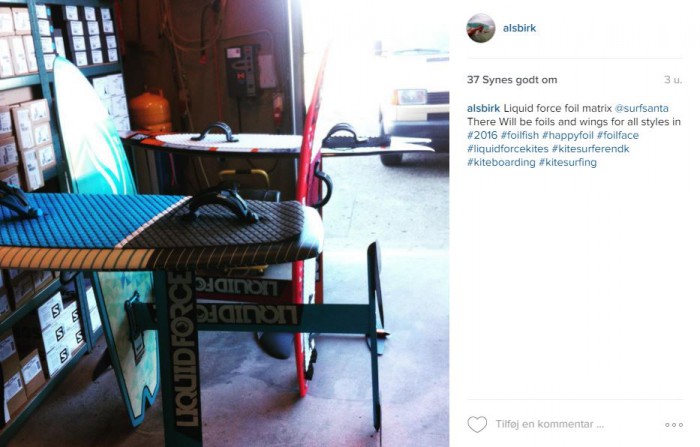 Overall it feels a lot like the foil fish...but the fuselage is longer, 10cm as far as I know - it is quite more pitch stable than the foil fish - the parasitic drag of the mast has decreased significantly due to the change from 18 -> 14 mm mast thickness. The 18mm mast does feel a bit stiffer in roll than the 14mm one though...so for freestyle and a lot of jups etc I still prefer the orange 18mm mast.

Torsionally they seem quite identical in rigidity, the 14mm mast has a much wider choord.

The wing shape is the same as the foil fish but the material is something like glass-reinforce nylon or so...it works surprisingly well and makes this kit even cheaper than the foil fish is.

To be honest, I prefer the shorter fuselage of the foil fish for foiling manouvers compared to the Rocketfish since I like my foil to be very reactive to input - but the fuselage of the Rocketfish has the option to put the rear wing further forward to match the responseness of the Foilfish - so quite a nice feature.

The wingshape is still the same, very good light wind and beginner charateristics and very easy to learn foiling moves on. I usually ride a faster wing, but I love to go back on the big LF wing every once in a while.

Overall, a good kit for beginners and manouver / wave oriented foil riders with plenty of upgrades available to allow progression..

The tracks below the board allows for much faster mounting of the foil + fine tuning to personal preference. The board can be set up with 2 or 3 straps..

I don´t think it will be available before 2016 though..

disclaimer. I have been involved with R&D for LF for a decade and I like LF products and i LOVE my good old foil fish still after 9 months of use and make my own foils also...
Top

Thanks for your review, Thomas (alsbirk). Lots of useful information.

Nice and balanced review, especially from a "biased" reviewer

Can you elaborate also on the deck differences Rocket vs Foil ?
Top

Both boards are pretty similar in shape and weight I reckon, I did not give it much thought as it just worked pretty much as usually. The biggest difference is the tracks for the foil on bottom of the new board plus the option for 3 straps.

the big swallow tail is also gone, it does not make much difference in practice when foiling.

I have heard about people who don´t think the foilfish and similar shapes works good for foiling but I think it is mostly a matter fo what you are used to, I like the low volume and very centered strap position. I don+t have any issues recovering from ventilation crashes despite the low amount of nose scoop-rocker etc. I think the shape is good for freestyle riding, but I also recognize that it is fairly heavy board, but it makes the package very affordable and the board is practically unbreakable also..

Can you tell me if the Rocket Fish's bolt pattern is the same as the Foil Fish's? I'm asking because I'd be interested in putting the new Rocket Fish mast on a Foil Fish, which of course doesn't have the mast tracks on the base.

I'm also wondering if the Foil Fish footstrap position would be okay with the Rocket Fish wing and fuselage setup or if the center of pressure is different enough that the footstraps would be better in a different position.

alsbirk wrote: The wingshape is still the same, very good light wind and beginner charateristics and very easy to learn foiling moves on. I usually ride a faster wing, but I love to go back on the big LF wing every once in a while.

Thanks for your review! Did you try faster wings on the foil fish with the orange mast? I have the foil fish and want to upgrade, but not sure if it will work with the 18 mm mast. I ride strapless and more on freestyle interested, not in race. I'm looking for a bit more stability as the low aspect wing offers. would you also change the stabilizer?