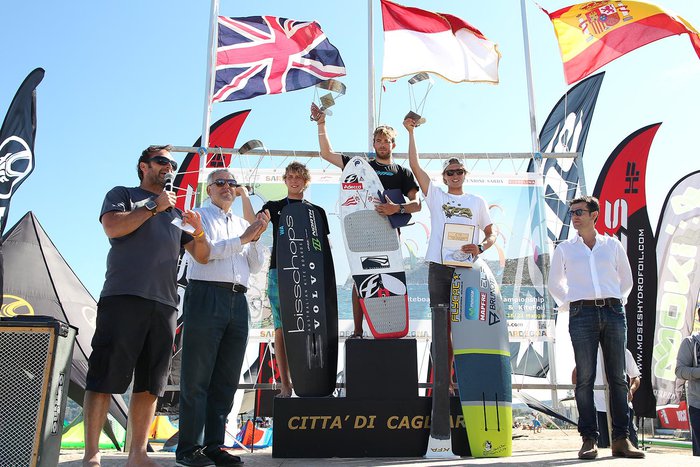 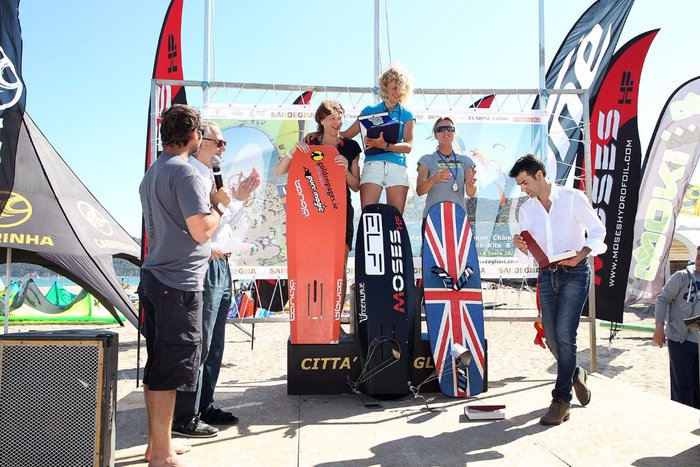 Cagliari, 23rd May, 2016 – Medal races conclude the 2016 IKA KiteRacing European Championships - for a first time on foiling kiteboards in both the regulated Formula Kite class and the open development KiteFoil class.

Maxime Nocher (MON, F-One/Taaroa) and Elena Kalinina (RUS, Elf/Moses) stayed flawless in the 4 race medal series on the final day of the competition at Poetto Beach, Cagliari.
With only the top 10 riders in the platinum fleet, the race committee of the Yacht Club Cagliari around Race Director Andy Curnow set up a 6 minute two lap course, providing new challenges to the fleet. With a spacious start line, tactics at the start played an important role.

Nocher went into the medal races with an comfortable lead, and took not any risk to allow any upsets.

The battle was expected between second ranked Olly Bridge (GBR, Elf/Levitaz) and Riccardo Leccese (ITA, Ozone/MikesLab) who was leading the event after the qualifying series. Only three points apart, and 40 points up for grabs throughout the four races, this was the highly anticipated match race.

However, the young Briton played it self as well, winning 2 races and scoring another 2 and 6, while Leccese lost ground in every race and finished never better than 5th.And from the back, originally with 15 points behind expected to be the safe 4th place, Florian Trittel (ESP, Elf/KFA) showed a consistent performance and it all came down to the final race where Leccese only had to stay within 4 places of Trittel.

But Trittel scored a third place while Leccese lost ground in every maneuver, having him finishing in 8th, tied in points with the young spanish rider. The tie was broken through the better results in the medal series, and Trittel found himself with a surprising podium finish - a nice present at the day before his birthday.

On the womens side of things, Kalinina never got in trouble, finishing a flawless event with another four bullets. For the Russian female champion this comes as a confirmation considering that she also won the 2014 and 2015 titles.

Large crowds witnessed exciting close racing throughout the whole week in champagne sailing conditions, leaving a smile on the face of competitors and officials alike. A complete schedule with a total of 52 races in make the 2016 an event to remember for everyone, and raised the bar to a high level for the upcoming competitions of the season.

The event came to an end with the prize-giving on the beach, and the crowning of the 2016 European Champions.

Congratulations to the all involved, especially to Slovenian and Croatian (my home land) riders!

4 female competitors in the Europeans - Potential olympic sport? Too funny.. Do you have to post these updates on kiteforum?!
Top

Once in the Olympics you will see way more.
Financially it will make a big difference.

Yes, it belongs to a kiteforum!
Top

750 000 000 people live in europe and 4 female competitors entered the championships for that area, one that had problems completing the course.