That was an enlightening post Foilholio - I want to know more.

Consider a kite with bias to one side, bridles and lines check out with beautiful symmetry. Less than 10 hours flight bought it brand new. Powered flight is good. Depower it turns right. I've tried empirically shortening lines with knots or lengthening with lcl. No satisfaction.

I'm convinced it's the canopy. I've inspected it carefully on the ground and in flight eg looking for a busted cell wall. No satisfaction.

I'll do the pleat first with tape. How far front to back? Please walk me through it.
Top

Before making adjustments to the canopy you need to have everything 100% symmetrical on the lines and bridles. So that means locking the front line ELCs together and comparing the mixers and adjusting them if needed, then you can jump to the canopy bridles and check them left to right. You mainly really only need focus on A and B. Stretching the canopy bridles should sort them out. The most important thing that is even is your front lines, rear lines are important too but fronts more so. I posted here how to sort them out viewtopic.php?f=197&t=2391081

foilholio wrote:To adjust lines you first need to take any shrink out of them. Applying a large even force to each line seems to work well. You can connect both lines in a chain so you can use your full body weight and the force is even.

A small rope run through a pulley with 2 lines connected to each end of the rope, the other ends to something solid and even, will allow you to apply even tension at different lengths. Sharpie marks made at the same point/s on each line close to the pulley end, can be used as a guide to adjust the lines later inside.

I dare say you will find your front lines are not even and your rears almost certainly won't be. If you start adjusting the canopy and the lines or bridles are out it can be a bit difficult to get the kite close to flying neutral.

I see I talked about even lines as well in that post, but I made an error there so I just edited it. It's important you stretch both lines out while connected as one long line before checking them.

the rest of what I posted


foilholio wrote: Great article written by Peter Lynn explains it http://www.peterlynnhimself.com/Pilot_Tuning.php. The bit to focus on is the sewing at the end. The diagrams dont match the explanation. Assuming the front lines and A bridles match, and the A tow points match, proceed to sew.

How I did it. Starting at the opposite side/end cell the kite turns to. At each cell line on the top skin fold the kite in half. I used one hand to hold the leading and trailing edge at their extremes. I then placed a finger in the middle to find the center of the cell wall. Use a pen that will soak through the cell and place a dot on the top skin near cell wall. Do this for a few cells in succession, the more the worse the turning problem. Hunt down the dots inside the kite through the the cell holes. Starting at the end cell. Sew a one ripstop square width pleat in the top skin,from cell wall to cell wall. Leave a 2 cm relief on each end, i.e. sew a diagonal on each end of the pleat so the pleat doesn't start straight at the cell walls but gradually. Use the ripstop squares as a guide to sew an even straight line. Do this to a few cells and subtract or add more later or one at a time. If the kite is unflyable you'll need about 6.

There is other possibilities of doing bigger pleats, pleats at other places than 50% and multiple pleats per cell. I would guess changes to the end cell/s have the biggest effect. This will also make the kite more stable. If applied to both sides it would reduce or stop tip flap, depending on the amount done.

I'll add to make sure you double or triple stitch the relief section. Also you could alter the side the kite turns to but you would need to make the pleats on the bottom of the kites skin on that side. Why you would or wouldn't want to do it on which side depends on which side of the kite you are trying to make the other replicate. To understand this I will explain what is happening. By tensioning the top skin cord wise you are reducing camber on the airfoil and increasing the AOA. This will make the wing section more stable and more draggy=slower. By tensioning the bottom you do the opposite, more camber, less AOA, less stable , less drag=faster. So if you look at your two wing sides and one is obviously faster than the other and less stable. Do you want the less stable tip to be more stable or the more stable tip to be less. Notice if you choose more stable you will have slightly less depower and slower turning ! One of my kites I should have changed the bottom skin on the opposite side, but so far I have only sew top skins but I have played with tape on the bottom though.

To answer your questions


jakemoore wrote: Consider a kite with bias to one side, bridles and lines check out with beautiful symmetry. Less than 10 hours flight bought it brand new. Powered flight is good. Depower it turns right. I've tried empirically shortening lines with knots or lengthening with lcl. No satisfaction.

I would say flying lines or pulley lines. Flying lines are not actually that easy to compare accurately, you need to make something like with a pulley and rope I described to do it. As to the pulley lines, depending how you compared the mixer this may not have shown, you need to lock the front ELCs together and go from there.

jakemoore wrote:I'm convinced it's the canopy. I've inspected it carefully on the ground and in flight eg looking for a busted cell wall. No satisfaction.

If all the lines and bridles are even it is the canopy. It can be very hard to impossible to see. You need to hard inflate the kite somewhere windless and carefully examine and measure it. You may notice a different twist side to side.

jakemoore wrote:I'll do the pleat first with tape. How far front to back? Please walk me through it.

Yep tape will work to test. I do it in the middle. In reality you can do it anywhere but the middle works. You could do 1 pleat in the middle or 2 with 1 at each third. The middle is simple. Where the sewing and exactly how it went wrong in manufacture is any ones guess, maybe an expert could see:-?. I like to apply the solution(pleats) broadly though so I don't distort things too much. Obviously where the seams are longer there is more chance for more error, but also the closer you get to the tip the more effect an error has as the kite can be levered with less effort from there....

Just ask any more questions and I will answer them.
Top

think adjusting paper airplanes by putting bends or folds in the wings.
Top

So i had the most luck by putting pleats near the trailing edge, increasing reflex. For reflex pleats, put them on the side of the kite you want it to turn towards while depowered. E.g. My kite was turning right depowered. Reflex pleats on the left and its true enough that I am happy. 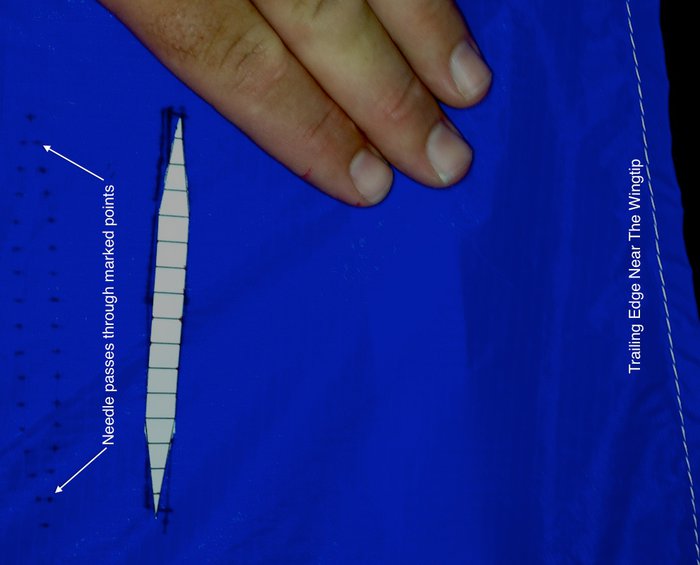 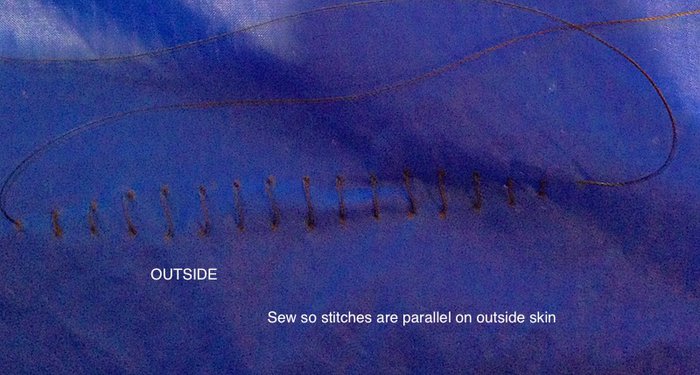 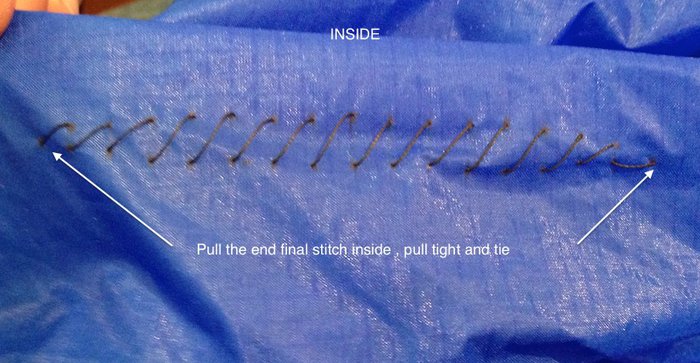 I made some templates. For my Summit V3 10, it took 4 pleats, 1/3 x 3 to 4 inches (depends on cell width) The effect of my smallest size pleat is quite small. 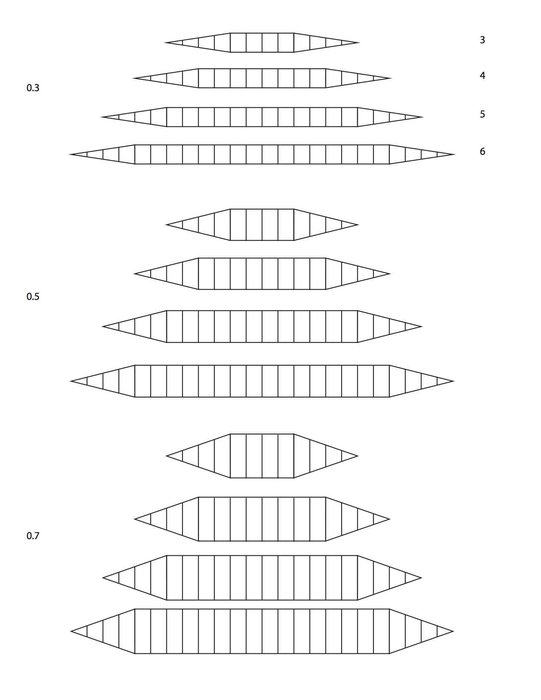 I do my pleats the width of the cell, with the reliefs tapering to a point at the seams. I try to average a small change over more of the kite so things are more smooth.

This Peter Lynn patent is interesting and useful https://www.google.com/patents/US6837463. The reflex seems more to the rear half(see image at bottom). I only did a bit of testing with tape and found placing the pleat anywhere had a similar effect. Near or on the LE looked cleanest. In my head the leverage from the TE should have more effect, that is why tails on planes are placed so far back?, but then on flying wings smaller changes to the wing control surfaces have bigger effects, so it would seem the opposite. I will have to read more about that. I placed my adjustments in the center as a guess, and as I said they seem to work much the same any where. 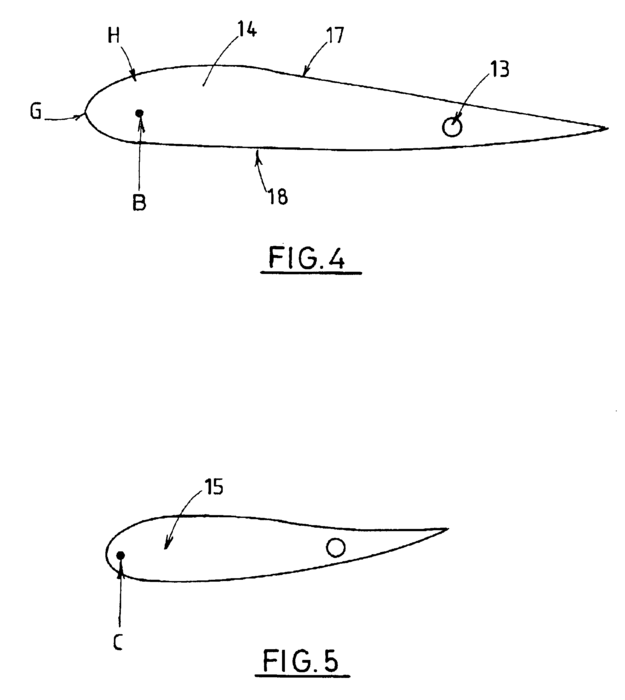 Did you read that Peter Lynn link how he does his pleats? http://www.peterlynnhimself.com/Pilot_Tuning.php
Last edited by foilholio on Fri Jun 24, 2016 7:49 am, edited 3 times in total.
Top

Yes. And also read long ago and forgot about. I never would have had the gumption to try on a new expensive high performance kite. I just did very small pleats to avoid distorting the canopy too much. Maybe that is why they were better near the TE? The powered flight is perfect, so I wanted just the smallest change in canopy possible.
Top

You can do smaller than that, I usually do 1 ripstop square width so basically 2 ripstop squares folded. The way you have sewn would put a bit of span wise tension on the fabric. Time to get a sewing machine

The hobby ones work fine.

Here is the PL pleat diagram from that link. He does the whole thing in a curve like a slice of orange peel. 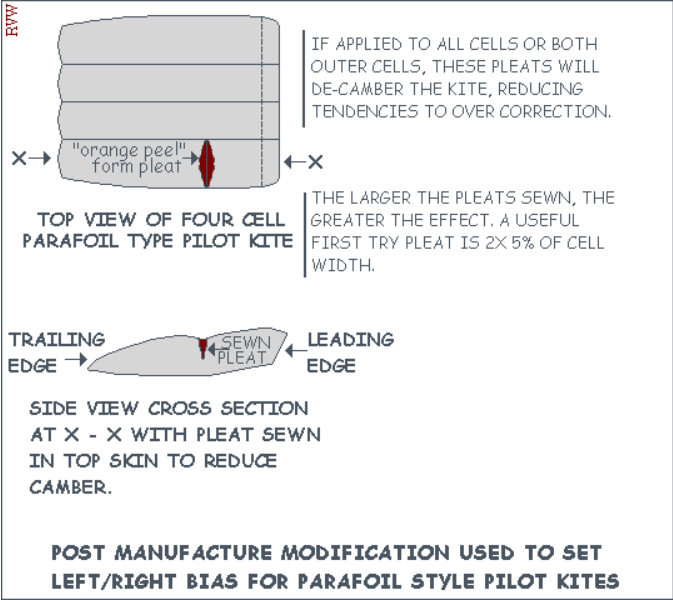 I'll also add it would be nice if I could find some info/research on different camber shapes. I doubt much has been done though as planes only seem to have a need for pretty standard shapes.
Top

Making pleats is a crude way to fix things. I have it hard to believe any modern good quality kite would have asymmetrical panels or something like that. For my knowledge parts are cut with CNC laser cutters which are very precise. Sewing tolerances are perhaps 1/8 of an inch, if not better. Parts don't fit at all in wrong order, so for example possible error to sew rib upside down is in practice impossible. To date I have not seen any foilkite which canopy was not symmetrical, possible incorrect flight has always been bridle related.

Problems for pleats are:

1)where to put them, how many, how big is the effect?
2)they distort the airfoil of the kite
3)they do local stresses for panels and if undone two rows of holes remain

Pleats may be ok for primitive kites like PL's lifter kite. I wouldn't use them in proper kites.
Top
Post Reply
18 posts