While I assume some kite shapes produce more or less hang time than other kite shapes am I correct in thinking that hang time is basically a function of kite size? In other words from the same altitude with the same design kites will a 12m kite have a longer hang time than a 10m kite? Or 17m versus 15m etc.
But also perhaps if you can jump higher with the smaller kite than the larger one then could the additional height offset the smaller kite size? Of course I am not talking about the super massive KOA jumps but the difference in a few meters that us normal humans manage.
At my normal spot I often find myself being able to use a smaller kite full powered or a full depowered next larger size up.. I have always assumed that particularly for airstyle I was better off on the larger kite but am I missing anything?
Top

Its all about the glide ratio i recon. How many meters forward do you go for 1m drop.

In my experience the kites with the best glide ration are the high aspect kites (long an thin). Even better when they have a high projected aspect ratio.

In today's kites the the best gliders are the high apsect race foils. They glide you for ages.

Next best is high aspect leis like ozone edge. 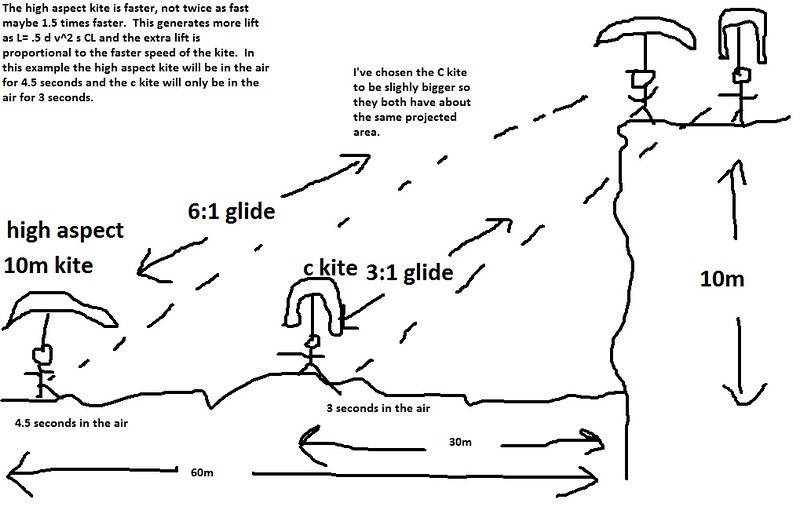 i used to think the same as you thought it was just projected area but it really isnt. The friendly guys on kiteforum eventually straightened me out. it's important to have a kite with an efficient glide ratio if you want more hangtime.
Top

That's one cheesy drawing edt! I like it.
Top

That's an interesting question.
One I can answer as I have a 13m edge and a 10 edge.

The 13m will glide for longer at the same height.

But if you send both kites in the same wind ie 22 knots boosting off the same a wave ramp (like King of air) which kite jumps further and longer?

The answer to that is the 10m!
Why? its faster to turn, can get up to speed faster, can be sent faster and takes you higher and longer than the 13m edge!

Opposite to what I initially thought, Which was take the biggest kite you can hold down and that will give you the biggest jumps. Not so!...
Top

A bigger kites gets you down smoother.
Plus way more control in steering...mostly that's needed to land those tricks.
Top

Now that's a hard question. I suspect it depends on the kite.
Top

Ive noticed in a few clips from last year that you can potentially get more hangtime with a c kite with heli loops. Maybe it can also be done with a higher aspect kite but i havent seen it yet. as far as a straight basic jump a higher aspect for sure has more hang time.
Top
Post Reply
11 posts