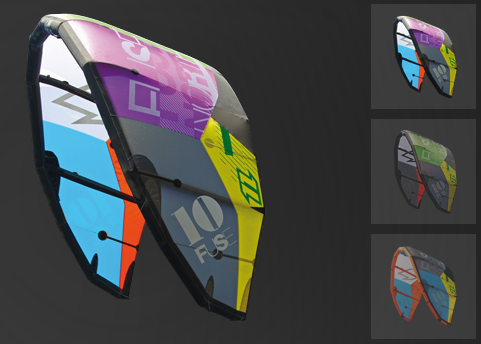 The Fuse is already in his 3rd generation and setting benchmarks in 4 line kite performance. It's a dedicated free-ride/wave kite that is sparking the future of 4 line performance every year. The Fuse is a easy kite for freeriding and waves with a huge wind range, light, predictable feel and great jumping qualities. Its unique and simple Attack Control Bridle gives the Fuse smooth, reactive steering that is especially evident when de-powered, making it a huge step forward in terms of manoeuvrability and directness on 4 lines. Additionally, the Bridle gives you the ability to safely and completely de-power the Fuse on its back, similar to a 5 line system, just a little bit slower. Easily accessible low-end power and extreme resistance to back-stalling gives the Fuse great light wind capabilities while the AC Bridle ensures direct de-power and a crisp bar feeling even in strong winds, with easy push and pull power. The Fuse is built to last, still utilizing the Techno Force canopy material D², which was first used ever with the first product generation of the Fuse. Lazy pump simplicity will get you on the water quickly and easily when it counts. To ensure a 100% safety solution the Fuse can also be flown on the 5th Element if desired. It's your choice!

What's the Same and Why

4 or 5 lines
The Fuse can be flown on either four lines or five:
(1) The fifth line option exist for riders who want unmatched safety and easy light-air water-relaunch. However, the short-bar stroke of the loaded-fifth-line Rebel does not apply in the case of the unloaded-fifth-line Fuse.
(2) The four-line option exists for riders who just prefer four lines for whatever reason
(3) The four-line option is also good for riders who when they have a five-line kite tend to wrap the kite in the fifth line. While a lot of riders never have this problem, some do and for the latter group a four-line kite with Fuse-style total depower is a good option.

Size-specific tuning
1) Sizes 10 to 14 have been tuned for short bar stroke and a maximally crisp feel. Compared with the Rebel these sizes in the Fuse have more draft-forward profiles and are a bit better for racing than the Rebel
(2) Sizes 5 and 7, which naturally tend to be a bit too crisp and responsive, have been tuned for a crispness and responsiveness that's just right. Not soft and slow; not uncomfortably harsh and fast. Both have been designed with a slight mismatch between leading edge arc and trailing edge arc. This softens the feel and makes these sizes more comfortable in cold, strong, gusty wind.
(3) 9-meter kites can go either way, a bit slow and soft or a bit fast and harsh. We spent some time tuning this one for what we think is just the right feel in a wave and all-around kite.

Tolerant of low inflation
Fuses work best when inflated to 6psi but still work fine at 5 or 4psi. By contrast, many kites on the market these days need 8 or 10 psi to fly correctly.

Segmentation, rib configuration
Aspects of the Fuse's overall geometry have not changed. There are still five struts, with the center strut being a floating strut for momentary depower and luffability. Segmentation is much the same from tip strut to tip strut

Multiple segments through the center of the canopy give good profile fidelity, while one straight segment on each side gives a flat profile where it can do the most good in resisting unwanted luffing and flutter. Five struts give needed structure while allowing for good performance at low inflation pressures.

Leading edge diameter
We kept the overall LE diameters fairly large right out through the tips to ensure rock-solid stability and tolerance of low inflation pressures. The new adaptive tip is more tolerant of low pressure than the old one, so we could have reduced tip LE diameter a bit, but chose not to in the interest of ensuring stability and reliability.

The Fuse is an all-around and wave kite, so there's no need to try to minimize diameters at the expense of convenience, stability and easy relaunch.

What's Different and Why

Important note about "Luff" and "Flutter"

Different parts of the kite luff and flutter in different ways.

Trailing Edge Flutter: The trailing edge can flutter whether it is under tension or not under tension. It's best avoided, but any kite can have a little of this.

Central Canopy Luff: Every kite luffs in the center section when sheeted out. This is desireable and unavoidable. Luffing propogates from front to back of kite and shows as fluttering by the time it gets to the trailing edge. This sort of luff-induced flutter is also unavoidable, though not exactly desireable.

Side Canopy Luff: Every kite luffs to some extent on the side that is to the outside of a turn. This luffing results in canopy flutter propogating from front to back of kite and ends in trailing edge flutter.

The kind of luffing and fluttering that we have reduced dramatically in the 2012 Rebel and Fuse is this last type. Since we have eliminated excess cloth as much as possible between the quarter struts and the tips, this part of the kite luffs and therefore flutters very little. This reduction in luff and flutter feels to the rider like a kite with smoother turning and smoother bar feel.

Smoother feel
Every year we try to reduce undesirable luffing and fluttering in the Fuse and this year we have made a further step in that direction, mainly achieved through fine-tuning of canopy profile. We also moved the quarter struts slightly farther toward the tips so as to increase the central "power" area of the kite and reduce the size of the side panels, the panels prone to luffing in a turn.

Luffing and fluttering occurs most when a kite is overpowered, or when it is turning tightly. In both cases, the feeling of the bar is one of vibration and imprecision. Reducing luff and flutter gives the bar a smoother and more precise feel.

Adaptive tip
The adaptive tip has the potential to make the tip surface area a little more effective and, if done correctly, less prone to unwanted distortion from steering forces.

The risk of the adaptive tip is that the canopy fabric can be less tightly controlled and can luff and flap more. We have paid particular attention to this issue and ensured a clean canopy shape in this area.

Tunable bar pressure
As with the 2011 Fuse, the 2012 Fuse features an adjustment in the back line bridle that permits the rider to opt for greater or lesser bar pressure. Low bar pressure reduces strain on arms and makes turn initiation easier, but gives less feedback about kite position and load condition. Higher bar pressure is a little more athletic and is often preferred by more experienced riders.

Power vs. Depower
Recent Fuse designs have had a lot of power. In 2011 we refined canopy profiles and angle of attack to improve depower, and for 2012 we have carried this process a step further to give a bit more depower without hurting power.

Turning speed
Owing to an adjustment in canopy shape between tip and quarter struts, there's less luffing and fluttering near the tips in a turn, so turning speed after the initiation phase is faster and smoother.

Speed
Though the Fuse has been competitive in races over the last few years, it really is a wave and all-around kite and pretty much none of the testing for the 2012 model involved race boards. That said, the Fuse is the next best choice for racing after the Dyno in sizes 9 and up. In sizes 8 and down, the Rebel and Fuse are equally fast.

New arc in 5 and 7 meter
With the 5 and 7 meter Fuse we intentionally designed the leading edge arc to not match the trailing edge arc. This mismatch would be undesirable in a large kite, as it would lead to inefficiency and a mushy feel. However, since small kites tend to feel too crisp and unforgiving, the arc mismatch is appropriate.
Top
Post Reply
1 post • Page 1 of 1