The city of Lagos in Portugal will receive the most adventurous watermen for a 12 hours nonstop challenge, in an innovative night and day format.
Between 23 and 24 July one of the most emblematic beaches of the Algarve will host the premiere of WATER KINGS worldwide . This event will test the strength, "knowhow" and the teamwork of the participants in an unprecedented synergy between 4 different water
sports kitesurf, windsurf, sup and sailing.

12 hours (from 1PM to 1AM) between two buoys with a clear purpose: do as many laps as possible to the course and become a Water King. The duration of the challenge, the night riding experience, the team work that will be necessary and the unusual combination of
sports competing together make this event the most challenging and attractive of the year!

In a coorganization Lagos Council and Lufinha Sports Events , the WATER KINGS competition promise to show the full potential of the city of Lagos as a privileged destination for water sports and at the same time present an innovative challenge to sportsmen.
"The choice of Lagos for the premiere of Water Kings was very natural because it has been for many years my election zone for holidays with friends practicing sea sports. I launched the challenge to the City Council and we decided to start working right away, since the
combination of the conditions of Lagos with this unique format worldwide has everything to be a success " says Francisco Lufinha, World Record holder for the longest journey kitesurfing without stops (874Km in 48h nonstop), whose first world record was established
precisely in Lagos in September 2013.
All the action is easy to follow by the public at Meia Praia Beach. And for those who cannot be in Lagos during the event, it will be possible to follow the race online via an interactive map with ranking, speeds and positions of the teams updated via GPS in real time.

Until then all the information will be updated at www.waterkings.pt , where interested athletes can also register their team (no later than July 10). 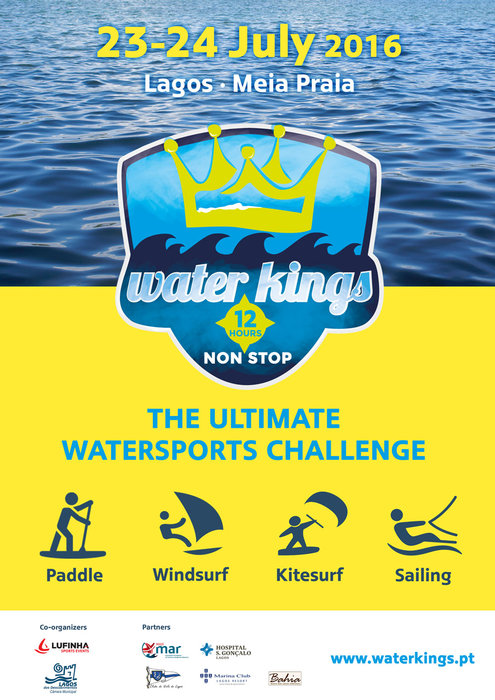