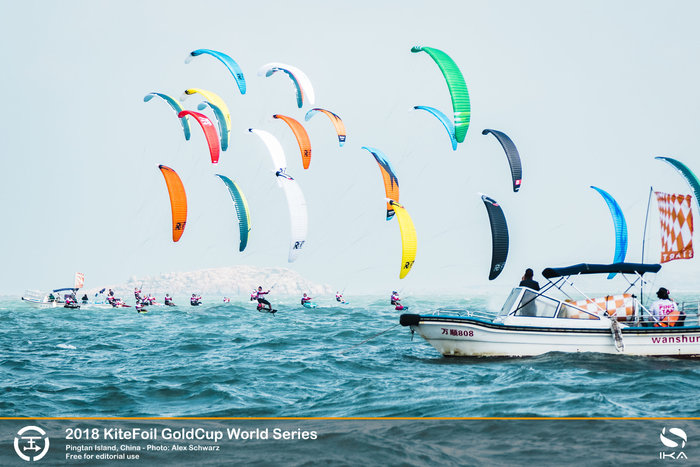 Monaco’s Maxime Nocher sealed victory at the second stop of the KiteFoil World Series at Pingtan, eastern China, on the competition’s final day in difficult conditions that saw high winds and big seas batter the track. The multiple world champion’s win over three days of intense racing, when he proved virtually unbeatable, cemented the comeback he began a week ago by taking the season-opening International Kiteboarding Association (IKA) KiteFoil stop in Weifang Binhai, in back-to-back events in China. If anything, Nocher was even more dominant in Pingtan where he seized an amazing 10 bullets from 13 races, putting him in the box seat to secure the IKA KiteFoil world championship crown awarded to the best racer at the end of the scheduled four-regatta tour.

“It’s great to win these back-to-back and I’m very happy,” said Nocher, savouring his second victory. “I had some problems today when my kite kept collapsing in the big gusts, but I can still see that I’m faster even in these conditions.” On the final fourth day in Pingtan, Nocher uncharacteristically could only manage one win to go with his second and fourth spots in the three races, before winds hit more than 26kts in mounting seas, forcing the competition to be curtailed for safety reasons. But France’s Axel Mazella, the current IKA KiteFoil GoldCup series’ title holder, used the truncated schedule to the full. He grabbed a bullet and two seconds that pushed him up the order to the second podium spot, leapfrogging fellow countryman Théo de Ramecourt in the process.

“It was super-hard,” Mazella said of the final day’s racing. “The wind was very strong and gusty out there. My aim was just to finish the races properly and stay ahead of Théo de Ramecourt. He’s faster than me but had a few problems with his kite collapsing. So, I’m really happy about my finish.” De Ramecourt was a little disappointed to surrender second overall after such a strong performance over the course of the regatta in which he took a clutch of second place finishes and even a bullet at the death. “I’ve definitely been having problems with my 9m kite, which I’ve never used before,” said de Ramecourt. “I’m happy with my speed compared to the other guys, but I feel I’ve been limited by my kites. But otherwise, I’m happy.”

Most of the 27 athletes from 16 countries found the conditions tricky over the three days of racing. Typhoons have been skirting the East China Sea track off Fujian’s Pingtan Island, generating high winds and big seas that prevented any racing on the scheduled opening day. The IKA KiteFoil World Series’ stop is the centre-piece of the 2018 Pingtan International Kitesurfing Festival that also hosted the Chinese National Championships, with 70 racers competing in TT:R course races.

In the small women’s KiteFoil group, competing in the strong men’s fleet, Russia’s Elena Kalinina, was pleased to finish in the mid-order. In doing so, the former Formula Kite World Champion clinched victory in the women’s field. “Today was interesting. In the first race the wind was still OK, but the second and third were more about surviving,” said Kalinina. “But all-in-all I like to race with the guys. It’s a good experience. They’re really fast and it’s a very, very high level. It helps you understand how much better you can be.”

Does anybody have a link or a picture of the rider/equipment list for Pingtan and maybe also Weifang?
I tried googling "equipment site:kitefoilgoldcup.com" but didn't find anything useful.
Top
Post Reply
2 posts • Page 1 of 1