And in another post that the 4 was a bit smaller than 4m.
Top

Everything is right about sizes you just have more information than you need.
Top

Posted this on the Australian Seabreeze forum in the Peak4 thread.
Firstly I want to thank Rick, aka AquaPlow. I mentioned somewhere on the Seabreeze forum that I haven't tried the 8m Peak4 and was waiting on stock for a few weeks while Flysurfer made more. Rick, who had purchased an 8m Peak4 from me, contacted me and said he would be happy to loan me his for a few weeks as he had come off his bike and sustained a fracture which would keep him off the water for a while.
I accepted his kind offer and true to his word, Rick posted the kite down and I've had it out a couple of times in some light wind.

First time I took the 8m out the wind was direct onshore and I had to struggle out to get enough depth to get up on the foil. Wind was averaging 7 knots with gusts of 10 knots as measured on shore. This was pretty close to accurate with the local Seabreeze wind stations. However I was beaten out by another local, Aaron, approx 20kg heavier than me, on a 5m Peak4 who proceeded to get up and going albeit sining the kite now and then! (We're both on 1250sq cm surf foils, mine a Moses 633 and his a Naish Large).
After running aground once trying to get started in the light onshore breeze, I got up on the foil and felt comfortably powered all the time I was out. The kite felt like a bigger 5m, with slower turning and a bit slower through the air. However it was still easy to loop and even in the lulls had enough power to pull me through downwind manoeuvres when I almost stalled the foil. One could have possibly flown a light LEI kite if you had sufficient skill and kept it moving but the slightest error would have seen it in the water.

I came in and gave the 8m Peak4 to Aaron as the wind had not strengthened and he was struggling to keep going with the 5m kite, (fair enough!). He went out and had the power to keep foiling in the light winds. Aaron has only recently started foiling in Spring last year and is still progressing but after one try of a Peak4 he bought a 5m and loves it. After trying the 8m he'd much rather use the 5m wind permitting, (don't we all like a smaller, faster, more responsive kite), but had to admit the light wind performance of the 8m can be the difference between going for a foil or whingeing on the beach.

Had the 8m out again yesterday in winds that were even lighter with barely a whitecap in sight but a bit better angle than straight onshore. Had a really good session close to the kites sweet spot for me, with the occasional swell rolling in. When I caught one of these swells far enough out, (they were't that big), I could really feel the power through the foil and ride the swell with minimal attention to or pull from the kite. It's these situations where only the Peak4 could be used. There were some others on the beach with various sized LEI kites up to 14m but none stayed in the air long enough to get past the shore break.

So is the 8m worth having? It works like the smaller Peak4's and some owners say the best Peak4's are the 3m, 4m, and 5m models which cover a significant wind range. You wouldn't use the 8m if you could use the 5m coz small kites and enough wind are more fun on a surf foil. However there are days, and in some places many days, where the wind is 6 knots gusting to 10 knots all day and you have a surf foil. You will be out foiling, having fun in your waterway on the 8m while everyone else waits on the beach hoping for more wind. Sure you can get a twin skin foil like a Soul or Hyperlink which will cover this wind range and have more grunt and speed. But it will cost nearly three times as much, won't turn as tight or fast and won't hang in the air like a Peak4. So even though it improves my lower wind range only by 2 to 4 knots it's worth it for me and I'll grab one for myself when the next shipment arrives. The only downside I can see is more time having fun foiling means the I'll be relying on the local kangaroos to keep the lawn short ...

And thanks again Rick, your generosity has been much appreciated. As soon as my kites come in I'll post yours back

And to follow up on the above with today's session: What I also had rigged today was a 10m Soul so I could compare it with the 8m Peak4. The Soul had a bit more power, better upwind and more speed in a straight line. But it was slow turning, heavier in the air, and harder to keep in the air when gibing.
With the Peak4 I could make turns repeatedly downwind, had enough power to easily get upwind and could just relax and have much more fun

My 85kg mate Aaron went out on the 8m when I came in and also had fun.

I would also like to thank Horst who started this thread. Although I sell the Flysurfer kites, I assumed like many that the Peak4 was a good, easy to use snow and land kite. In fact my first sales of the Peak4 was to a land kiter who used them with a mountain board. It was Horst using the Peak4 3m on a hydrofoil that got my attention. I had a surf hydrofoil, I weighed about the same as Horst and a Peak4 3m was an inexpensive kite, what did I have to lose? Well nothing at all in retrospect. Well, I did lose some work time as I could be foiling on the Peak4 in wind I would usually ignore and be working

Like cut it to 3 piece and sew it together smaller. AR will be lower of course. Or its easier just buy quite much more expensive concept air?

Kitexpert would likely be better to answer this, but I will try. There is ways to scale a kite, likely software to do it, but there is formulas at the base of it. This will arrive you at a kite that should fly well but there could remain some optimization. Likely just little tweaks to the bridles, but at the extreme the AR and other things can be changed. In the past and still for brands like Pansh it would seem things were only scaled. This had the odd effect that some sizes would be better than others. So brands have taken to the more extreme adjustments per size to optimize them all.

It is unlikely just shortening the middle will work well, but then there is that single skin that does that. There would be little harm to trying it, you could tape or pin the middle.

And in another post that the 4 was a bit smaller than 4m.


tomtom wrote: Everything is right about sizes you just have more information than you need.

I think it is always nice to have the actual numbers. The LEI world is awash with gross mislabeling, bigger one year small the next. It causes confusion and makes it hard to compare, which is likely the desired result. Marketing are aholes.


drsurf wrote: I could really feel the power through the foil and ride the swell with minimal attention to or pull from the kite. It's these situations where only the Peak4 could be used.

I would disagree in that you can do it with other kites, particularly some light foil kites but a peak 4 is better at it. I am not certain if a peak4 is better with slack lines than a regular foil though, because you guys are not riding like that from what I gather.
Top

You are right - Peak is hard to REALLY slack - couse they drifting so well a sit deeper in VW. BUT and this is big but. If you use smallest possible size - so kite is in its low end - this rest pull from kite is like nonexisting. I often pull on chicken loop line with hand and try to estimate how much pull is there - normaly its in ca. 1kg range.
Top

tomtom wrote: ↑
Wed Jan 15, 2020 1:35 am
You are right - Peak is hard to REALLY slack - couse they drifting so well a sit deeper in VW. BUT and this is big but. If you use smallest possible size - so kite is in its low end - this rest pull from kite is like nonexisting. I often pull on chicken loop line with hand and try to estimate how much pull is there - normaly its in ca. 1kg range.

To be honest, I like it when the actual sizing is used on LEI (eg: Cloud kites 2.8, 3.7, 4.8 and Gong kites) but actual sizing on the Peak 4 does not equate to the same comparison given that Peak 4's are more powerful than LEI equivalent size.

Having said that, the Cloud kites have a better bottom end behaviour than other more strutted LEI.
Top

A comment about how the lines came set up on my Peak 4. 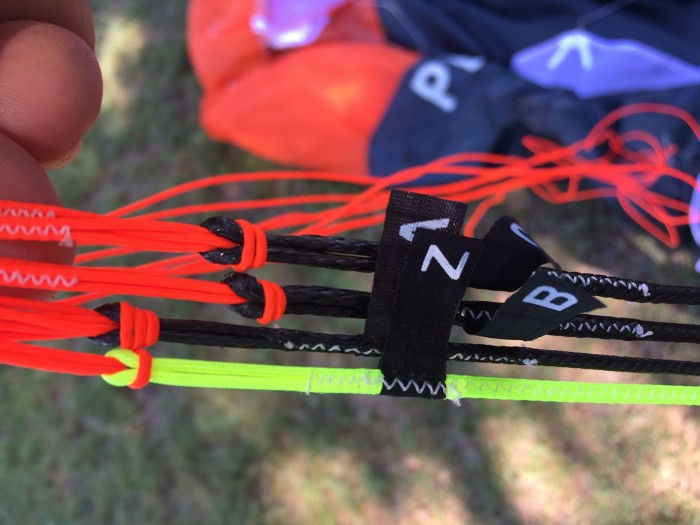 Do I need to adjust B and C as Armin has shown in his vids that they need to?


My 3m has come setup in the same way.
Top

Forget about it and ride. Too much thinking. Whole point about Peak is - dont think about kite. I never even look on my bridal lines.
Top

And then I decided to adjust them so that they were all even . . .
Top
Post Reply
1799 posts