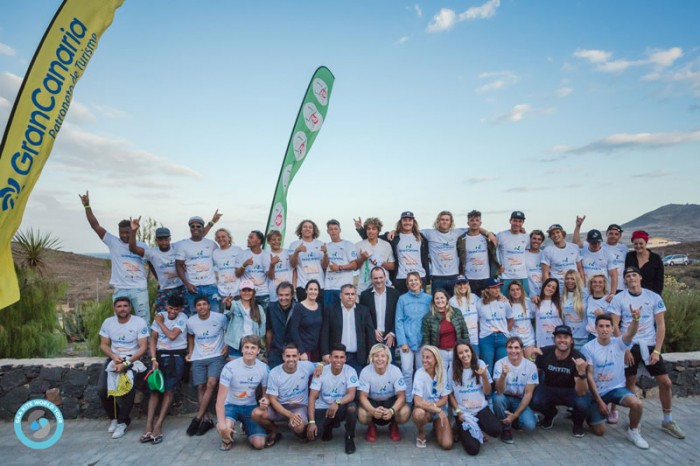 34 riders, 25 men and nine women, arrived at Playa de Vargas today to register for the GKA Freestyle World Cup Gran Canaria and to get a feel for the spot in pumping 25 knot + winds.

Although Gran Canaria has already rightfully earned its place in windsurfing lore over the years due to the many events that have been held at the legendary Pozo, which is just a couple of kilometres from here, there's never been a World Tour kiteboarding event on the island before now.

That’s all about to change this week though, with a dependable looking forecast and the overall tour leads up for grabs at what's still an early stage in the competitive calendar.

The main event will run across the next four days from Thursday until Sunday and the judging criteria will be split between wakestyle / freestyle and big air depending on the conditions. This 'open format' gives the riders the chance to ride to the day's conditions, and so it looks like tomorrow's opening heats will be freestyle-focused with 20 knot winds on the forecast.

If the famous Canarian 'Alisios' trades fire in full force though, we could well be looking at a big air blow out later in the week!

Carlos Mario currently leads the men’s division, but Maxime Chabloz will be hot on his heels after narrowly losing out to the Brazilian in the finals at the first event of the year in Leucate back in April.

Liam Whaley is also here, fresh off the back of a storming performance and a fourth place finish at the Red Bull Megaloop last weekend in the Netherlands. He was already looking very tuned into the conditions and was firing on all cylinders during today’s warm-up session.

In the women’s division, the top spot is wide open at this event due to current tour leader Francesca Bagnoli’s absence and Mika Sol, Bruna Kajiya and Hannah Whitely are just some of the riders who’ll be vying for their chance to climb higher up the overall rankings here in Gran Canaria.

With the opening ceremony complete and the event now officially underway, the action will begin tomorrow morning with a first possible start at 10:00.
Top
Post Reply
1 post • Page 1 of 1