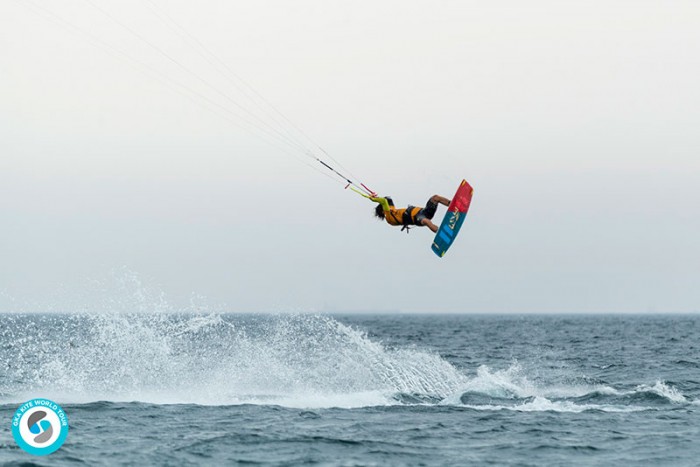 Right, own up! Who cursed the conditions this week? Time and again today I encountered GKA Kite World Tour judges, who are local to Tarifa, stumbling around in a daze, muttering, “Man, I've never seen anything like this before...”

Alvaro Onieva was alarmed for his home town. “At this time of year, this is nearly impossible! How is this happening?”

Tarifa hasn't just become world famous for its incredible party scene. Peak summer in July, with Poniente in the forecast over a five day period, we should be banging through regular afternoon heat action.

From strange it reached bizarre...

The grey morning clouds continued to hold back the frontal winds that were forecast until early afternoon. Then finally heat four of the men's Freestyle single elimination resumed after it had to be cancelled yesterday.

Then it was stopped.

Then it started again and, finally, over 24 hours after the heat began, the tour's second placed rider, Maxime Chabloz stole the lead from Nikolas Delmas right at the end on his last trick, "managing to catch a good gust" the Swiss rider admitted on interview, though he had also stomped an 8 point slim 7 earlier in the heat, but it was so long ago my brain had erased it. Being narrowly nudged off top spot in the four man heat was no matter for Delmas, as they both go through to the next round.

Heat 5 took to the water, featuring Valentin Rodriguez, Gianmaria Coccoluto, Arron Rosslee and Lazare Gournet... which is when the voodoo struck.

I was posting the heat result on the website's live ticker when everything went quiet (the temperature also honestly dropped... no lie...). The livestream video screen on my computer flicked to black and the message 'connection cut.' appeared. Downstairs the livestream team checked their cables while I pressed update, stood up and looked over the judges' heads from my desk behind them. Silence prevailed and I looked out to see every single kite of every rider that was currently out on the water as far as the eye could see, face down in the water... with not a breath of wind to flutter an edge.

It was the most bizarre scene I've seen – the biggest deep water pack-down session ever!

Throughout the afternoon the wind switched on, off, veered 180 degrees, swung 90 and generally played the devil's music.

Although Mitu Monteiro managed to cavort back and forth, throwing tricks along the ghostly wind line (it's now fully confirmed his riding has gifts of hocus pocus), in the end no more heats ran.

Tomorrow is the last day of competition and all focus is still on the Freestyle men. As a collective of disciplines on the GKA Kite World Tour, they only have one podium result this season, while the Kite-Surf tour men already have two successful events in the pocket and have reached the top eight here in Tarifa this week, which also qualifies as a valid top eight result for them, should no more heats run.

The livestream also got funky as the will to fill-in saw Willow-River Tonkin and Oswald Smith jam live tunes on the studio's sofa. “I gotta stay high all the time, to forget I'm missing you.” seemed about right.

I'm now signing this newsletter off to the melancholic sounds of them busking on the beach after stealing the MCs mic. Over and over...

Is the day over? Stay safe tonight kids. There's strangeness out there.