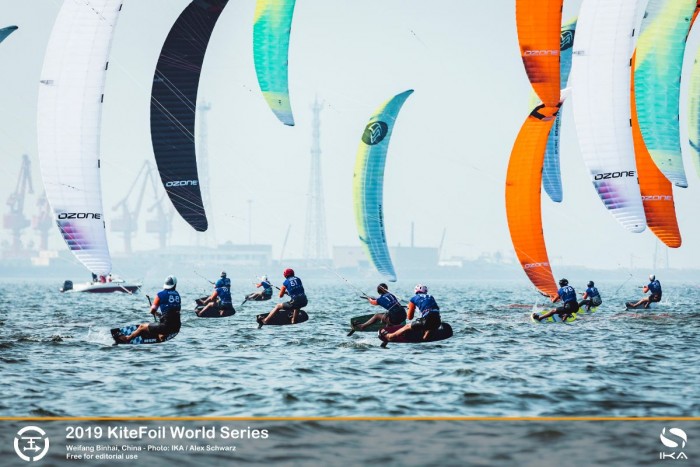 Slovenian teenager Toni Vodisek finally got his nose in front at the top of the standings at the KiteFoil World Series in China after a stellar run of races in lighter airs on the penultimate day of the competition.

Vodisek, 19, who leads the World Series after a dominant win at the first tour stop in Italy in July, grabbed three bullets from the day’s five races, helping him vault up the order from his fourth position overnight.

In doing so he leapfrogged multiple former world champion, France’s Maxime Nocher, who had held the lead throughout the opening two days of the competition off Shandong province’s Weifang Binhai beach.

But with just two points between the pair, and former world champions Axel Mazella (FRA) and Florian Gruber (GER) only a few points adrift snapping at their heels, the final fourth day of the series’ second tour stop is poised for a climactic finale.

The Weifang regatta, boasting €60,000 in prize money, is the first of back-to-back stops in China, ahead of the World Series’ final at Cagliari’s Poetto Beach on the Italian resort island of Sardinia next month, when the new world champions will be crowned.

Vodisek has won a remarkable eight of the 16 races over the first three days fought out in a variety of conditions. But a mixed opening, dogged by ill-luck when he struck fish or seaweed with his foil, put him down the order.

On day three his three wins on the smooth waters in 7kts to 9kts breezes were accompanied by a second and a third, with three discards finally allowing him to put aside some of his poor results that had held him down.

“I’m first? Wow!” said an exhausted but elated Vodisek, coming to the beach after the day’s last race. “I can barely walk. It was a good day at the office, though. And I like my office. After the first day I just said I wanted to win races; I don’t care how I finish up. That seems to be working for me.”

Nocher had maintained his slender lead at the head of the order for the opening two days with remarkably consistent, high-placed finishes, including a couple of bullets. But Vodisek’s ability to grind out wins against the toughest competition, including Formula Kite world champion, Nico Parlier, were enough to give him the edge.

Britain’s Guy Bridge, sitting in sixth spot overall, had a better day, notching up a bullet, a second and a third in the five races, that were enough keep him in touch with the leading pack.

“That definitely went better today,” said Bridge. “I got a bullet. I felt I had been going all right before. I was there or there abouts for the first couple of days, but not really clicking. Today is good. The wind’s a bit tricky, but not many shifts.”