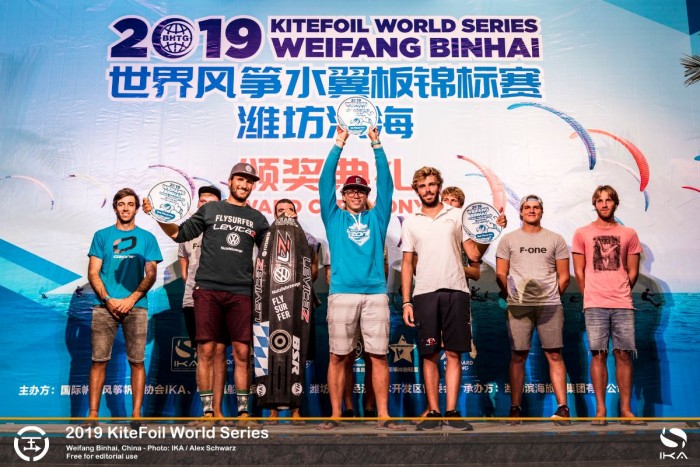 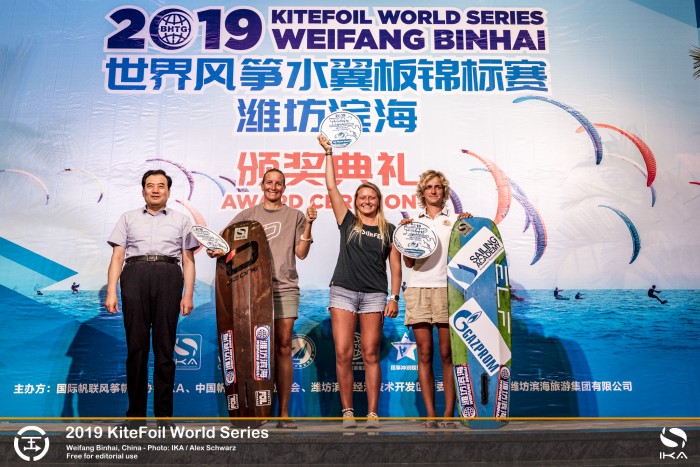 Vodisek, 19, who dominated the tour’s first act in Gizzeria, Italy, in July, suffered a catastrophic crash while leading in the final day’s last race. He struck something in the water pushing hard on the first downwind leg, breaking his kite lines and putting him out of the race.

But by then the teenager, who exploded into the top echelon this season, had already done enough in the regatta’s two final days to guarantee another top podium finish that puts him on course for the International Kiteboarding Association (IKA) KiteFoil world title to be decided at the series’ finale on the Italian resort island of Sardinia next month.

Before that, though, Vodisek will again find himself pitched against the toughest opposition in a few days’ time at the tour’s third stop, also in China, on Fujian province’s Pingtan island, where the windier conditions pose an altogether different challenge from the closing travails of Weifang.

“I just went ‘loco’ in the water after I hit something,” said Vodisek. “I said, bye-bye guys. It felt horrible. So, to find I won, it’s nice. It feels amazing. Now let’s go for the third one.”

Multiple former world champion, France’s Maxime Nocher, who held the lead for Weifang’s opening two days with consistent finishes, but slipped behind behind with Vodisek’s stream of bullets, took a well-earned second podium spot keeping in front of Florian Gruber (GER) and Axel Mazella (FRA).
“I enjoyed it,” said Nocher. “I’m happy to come back to the podium. Today I was really looking out for Florian Gruber and Axel Mazella, so I was less focused on Toni Vodisek. Perhaps I should have been, but I’m happy with second. We’ll see what happens in Pingtan where it’s windier, which I prefer.”

In the final day’s four races, which began in 9kts of breeze and quickly built to around 14kts under clear skies, Vodisek was on fire, often grabbing back the lead in searingly-quick downwind legs to give him three bullets.

But former world champion Florian Gruber (GER), the self-proclaimed “old man” of the fleet at 25, also clawed his way up the order to the third podium spot with a second, third and fourth that were just enough to overhaul Mazella on the leaderboard.
“It’s a great day, and great to be back on the podium. Excellent.” said Gruber. “It’s getting better. I’m steady in the top ten. I got a fourth in Gizzeria. So, I’m pretty happy with that. There’s also my motivation. It’s more fun when I can keep up with the top guys.”

Four-time Formula Kite world champion, Daniela Moroz (USA), among the nine women in the 35-strong mixed fleet from 15 nations, was also able to keep up with the top guys and far outpace her women rivals, eventually finishing 12th overall.

“My last day was alright,” said Moroz. “Finally I had a clean start, something I’d struggled with in the last few days. I was happy with the speed off the start. I’d been trying to go off the boat end. But I made a decision to switch to the middle of the line and it worked much better for me. Happy with that.”

Former world champion, Russia’s Elena Kalinina, just squeezed ahead of Kirstyn O’Brien (USA) to take second, though on the final tight day of racing she feared she may have conceded the advantage to her rival.

“It was not easy today,” said Kalinina. “Everyone was out with their big kites and sometimes you get overpowered. With Kirstyn O’Brien it was close. She was really good today and I thought she’d overtake me. I wasn’t confident, but that’s racing.”

Re: Slovenian teenager makes it consecutive wins with triumph at KiteFoil World Series in China