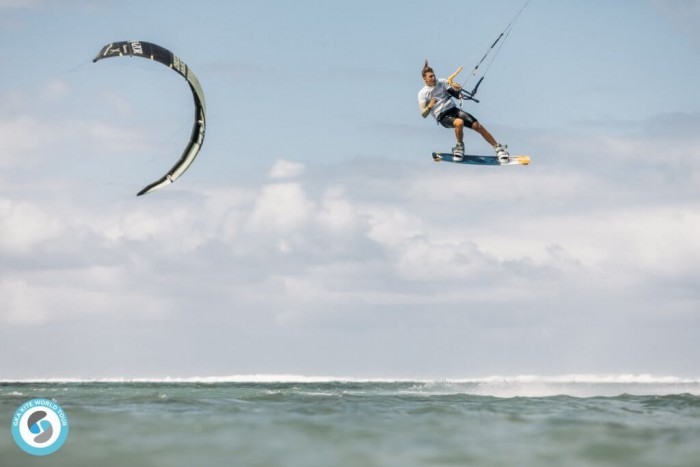 “Going for tricks that need a score of 9 or above for a lot of the heat is so much pressure.” a deflated Liam Whaley admitted to the crowd from third place on the podium. The Spaniard was reflecting after a day of super tight competition in both the men and women’s Freestyle discipline at the GKA Kite World Cup Mauritius, taking place in front of the Heritage Hotel’s C-Beach Club and the Kite Globing centre, in Bel Ombre.

The day started at the quarter final stage for the men, while the women had already progressed to the semis.

The event is hosted at Bel Ombre by: C-Beach Club and Kite Globing.

As well as being packed with incredibly high trick and heat scores throughout, there was also tragedy and heartbreak.

Stefan Spiessberger is one of the longest-standing freestyle competitors that the sport has seen. He re-dislocated his shoulder at the start of the second quarter final when the bar pulled him forward and he caught a rail. In a rather more freak accident, reigning champion Carlos Mario injured his knee during the warm-up for his semi-final…

We wish them both well, but Mario’s sudden withdrawal offered the chance to this year’s new tour leader, Maxime Chabloz, to really capitalise on points.

In truth, the Freestyle competition takes some getting to know. The tricks are of course very technical, often with very little obvious differences between each trick to those not ‘in the know’, but if you were stood on the beach here in Bel Ombre there was no chance to say that new school freestyle was done at low altitude today. The first semi final was one of the best heats of freestyle kiteboarding we’ve ever seen in recent years.

Riders were attacking their tricks with furious venom, each throwing their trick on their first run out in their allotted minute, usually in the first 15 seconds, such was their focus. You got the impression they all knew that as soon as they took their foot off the gas, the others would pounce, sensing the loss of momentum.

Posito Martinez scored the day’s joint highest trick score with a 9.9 for a heart attack 7 (Liam Whaley got the other 9.9), but the Domincan would finish in third, agonisingly just 0.27 off qualifying for the final in second.

Liam Whaley’s 9.6 for a KGB7 on his penultimate trick had moved him into first, where he finished, just ahead of a battered Valentin Rodrigues who survived the biggest front edge wipeout you can imagine, coming down from the stars on trick six.

The second semi-final would have been the heat of the event, had it not been for semi-final 01. The scorecard was littered with high eights and one nine point score (Adeuri), but the headline story was the final point tally of the top three:

Adeuri beat Delmas by 0.3, while Maxime Chabloz was left to rue the chance to extend his lead at the top of the championship by missing a good take-off and getting a really low trick score on his final attempt, missing out on the final by 0.7 points!

The margins are so tight and the judges are called on with great pressure to separate them.

I often sit in the judge’s tower when making notes and head judge Mallory de la Villemarque constantly keeps the judges focused on the scale, reminding them of the other same tricks that heat: “Remember what you scored Valentin for his heart attack 7 – scale against that everyone.”

So yeah, the scores today were high, but if you study back through the scores online, you’ll see that there were many nines, for 319s, slim 9s, KGB 7s… and heart attack 7s.

Is there anyway to actually watch this? I find the short video clips rather annoying to be honest. If someone is going to video the action, why can't they just video all the action (unless I'm missing something?).

Si_B wrote: ↑
Wed Sep 11, 2019 9:15 pm
Is there anyway to actually watch this? I find the short video clips rather annoying to be honest. If someone is going to video the action, why can't they just video all the action (unless I'm missing something?).

Not really. Sometimes there is a live stream on instagram, Alex Pastor had one for the freestyle finals. For the wave event I couldn't find anything.
Top

So a world sporting event with no coverage? Makes no sense.