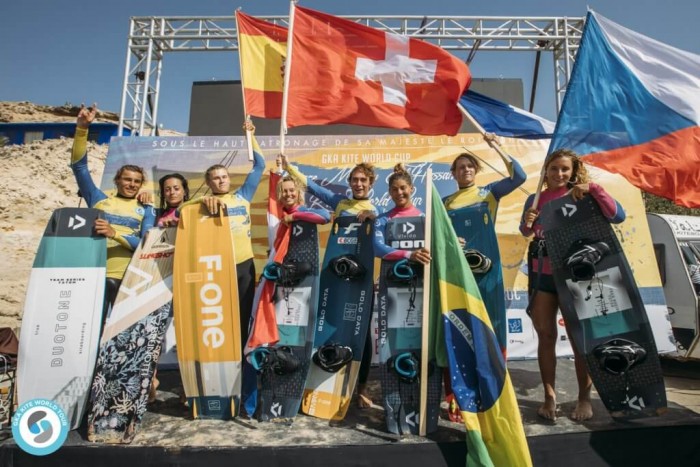 As the official GKA Kite World Cup Dakhla Freestyle discipline came to a close yesterday, we moved on to a fun event on day four, in the form of a team Game of Kite.

Judging Criteria: Land or crash!
Format: Game of Kite – teams. Judges dictate the tricks that need to be completed in each round. One rider from each team attempts that trick in rotation. If they land it then great, but if they crash it, they get a letter. First two teams in each round one heat to collect the letters K-I-T-E would be eliminated, leaving the other two teams to advance. Basically it’s 4 crashes and your team is out.
In the super-final, the competition ran until there was just one team left – the winners
Wind: 20 knots

THE FINAL SUPER SESSION
Although this final was just for fun it was good to see the riders working as a team to land a really mixed variety of tricks – everything from a double front roll to double heart attacks as well as kite loop front rolls and more! We’re excited to see these super sessions develop over the years, pushing the all-round skills of the riders and the fun for the crowds.

In the end, Pippa and Liam were pretty dominant, crashing just one trick out of eight, by which time all the other riders had been eliminated, crashing four times.

Liam: “When they announced yesterday that they would be doing this event, I quickly grabbed Pippa as my partner and it was good to do some tricks that we don’t usually train for. It was fun and I had no crashes, whereas Pippa had one, so I guess I’ll get more of the prize money, ha ha.”

Pippa: “It was good, my team mate had no crashes, I had only one and I’m stoked to land a slim, which I’ve not done before!”

Maxime: “I have to say the four tricks in the final were definitely not my sort of tricks. I never train them, but now I will!”

Mika: “It was pretty interesting, I made all my tricks, whereas my partner Maxime was struggling, so ha, nothing more to say.”