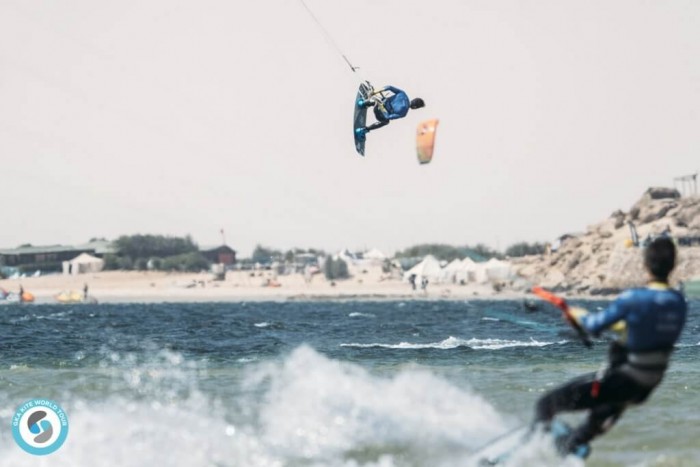 As the official World Cup Freestyle competition had completed, a selection of riders would compete in a fun Best Trick competition!

Today (Tuesday 8th) is the last day of the Freestyle event. Wednesday is the start of the Kite-Surf event at the wave location at Westpoint.

BEST TRICK
Judging Criteria: Best Trick
Format: Taking in turns to do one trick each, riders had four attempts at any trick they wanted to throw, only their single best trick score counted. Top three riders from the two heats advance to the final. Three women will compete in a one-heat showdown.
Wind: 20 knots

BEST TRICK
As the official World Cup Freestyle competition has completed, the riders will be competing in a fun Best Trick competition:

Adeuri Corniel bailed out with a small tweak injury before the heat – no sense in risking too much in this fun event when you’re challenging for the world title at the next event for the Dominican.

On trick two Liam stepped up the game with a back mobe 7 a risky trick we rarely see attempted in competition. Indeed only Liam and Maxime Chabloz are the only guys to have landed this massive back roll with two frontside rotations.

Valentin Rodriguez was once again blowing our minds with how high he can pop,
but his slim 9 was evading him. A 7.97 slim 7 put him in second going into the last round of tricks.

Erick Anderson went first for his fourth and final trick and threw a huge double heart attack 5 (double S bend with a backside 5) scoring a very strong 8.77 and he took the lead! Amazing.

Juan Rodriguez came next, big backside 317 on the outside – a 7.83, not enough to move into the podium positions.

Liam was next, currently in second position, he tried that back mobe 7 again, but got a big butt check, so no change in score for him.

Jonas Ouahmid the local was propping up the table. He went for a big double heart attack but again caught a big butt check.

Valentin Rodriguez, lying in fourth with this last trick to go, stretched off his arms on his tack out, turned and headed back in to the beach, left foot forward… and ohhhh he doesn’t get his slim 9. Was a big slim 7 but wouldn’t give him enough for the top 2… he gets a 7.43 and stays in fourth!

So it was Christophe Tack, in third position with a slim 9 that scored 8.2, last rider to go, could he get higher… no! Big butt check on his slim 9 attempt.

So congrats to Brazilian Erick Anderson, who we don’t see on tour very often, but performed really well in the main event and has taken out this best trick! A mouthwatering prospect for the final round of the GKA Kite World Tour coming up in Cumbuco, Brazil next month!

Liam: “The rotation is really hard on the backmobe 7 and hard to know the axis. Great to land one, i didn’t do the best execution but it’s good to try tricks that you wouldn’t really try in competition without the pressure.”

Coming into her third trick and Paula Novotna unleashed a massive heart attack – incredibly smooth but yet really powerful and fully committed – earning a huge 9.37 score.

So it was all or nothing on the last trick for Pippa (who must have thought she’d done enough with her 8.77 scoring heart attack)… but she crashed a backside 313 hard. Only one female rider has ever landed that – Bruna Kajiya – so it was the right trick to go for, fair play! It was big, too.

Helena Brochocka was last in rotation for her fourth trick. She landed a nice back mobe, which gave her 8.4 points, so she narrowly missed out on second place and she finished in third.

Great comp there ladies! So it’s congrats to Paula who landed all four of her tricks to a super high standard, but it was the 9.37 heart attack that won this single best trick comp for the rider from the Czech Republic.

Paula: It was so much fun to compete in this best trick come because we just went for it and sent it… and trying tricks we’ve never done before! I’m really happy.

Pippa: It’s really sick and this place is beautiful and it makes us kite even better. I just had to go for blind judge 5.

Helena: It’s super fun, especially as I’ve been away for a while, but the girls are really pushing and I’ve really enjoyed being a part of it again.

Coming next: The men’s final!

13.00pm – MEN’S ROUND ONE HEAT 2 OF 2
Christophe Tack is back again, and this time a slim variation doing the damage – his slim 7 on his second of four tricks scoring a heat high 8.6.
Also going through to the final behind him (to join Val Rodriguez, Liam Whaley and Erick Anderson who qualified from heat one) are Adeuri Corniel and Juan Rodriguez.

12.20pm – MEN’S HEAT 1 OF 2
Val Rodriguez’ 9.5 scoring slim 9 was INCREDIBLE! The pressure’s off in this event, no world tour points at stake and only the best trick counts. The official event winner here in Dakhla shows us just why the 17-year-old has been making such a stir in his first full year on tour. He’s only a slender margin behind Adeuri Corniel for the championship and tricks like this slim 9 are pretty much unbeatable. It was HUGE!

Liam’s slim 7 was still sick and enough to carry him through to the final along with Erick Anderson from Brazil for his 8.2 scoring KGB5.
Top
Post Reply
1 post • Page 1 of 1