We have our winners of the SuperKite Brasil 2020

We have our winners of the SuperKite Brasil 2020 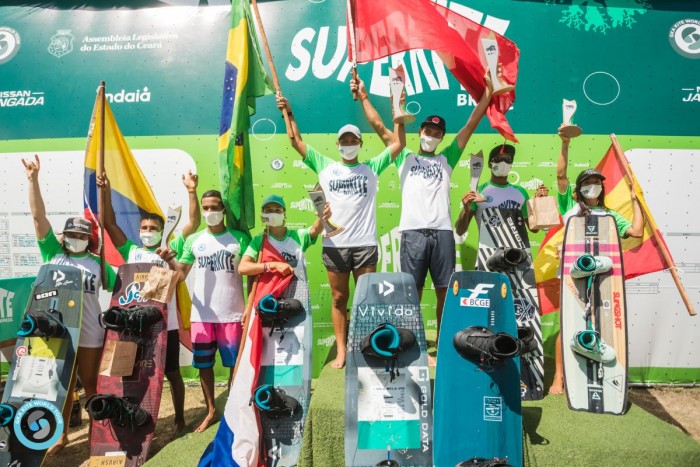 In slightly lighter winds on this final day of the competition, the focus of the judges was on quality and attention to detail when it came to the execution of the tricks.
The level of riding at this event was just out of this world with some of the highest overall scores ever achieved in a competition, and tricks never landed in a contest before.

Here are the official results:

Read all about how the women’s and men’s semi-finals and finals played out!

Women's Semi-Finals
Nathalie Lambrecht from Sweden, Rita Arnaus and Claudia Leon from Spain, and Therese Taabbel from Denmark battled it out for a place in the final in heat 1 of the day.
Rita, displaying power and confidence and landing every trick, quickly takes the lead in this heat.
Nathalie and Claudia both perform well, but Claudia shows more consistency and bite. Therese struggles with her leg after hurting it earlier and retires from the heat.
With Therese out of the competition, this leaves Nathalie in third place behind Claudia Leon in second and Rita Arnaus in first place, both Spaniards moving on to the final.

Katarzyna Lange from Poland, Paula Novotna from the Czech Republic, Pippa van Iersel from The Netherlands and Mikaili Sol from Brazil delivered an intense fight in heat 2.
Pippa van Iersel, the “Dutch Destroyer”, starts her heat with a bang, but Paula quickly takes that lead from her. Mika is absolutely on fire and keeps on showing the best tricks of the competition and scoring big, earning her a comfortable lead. Katarzyna, although riding with a lot of style, doesn't stand a chance and places fourth.
Paula's performance is not enough to make it through to the final, so it’s Mikaili Sol and Pippa van Iersel in the final against Claudia and Rita!

Men's Semi-Finals
In heat 1 it’s a purely Brazilian-Swiss heat with Erick Anderson and Alex Neto from Brazil and Maxime Chabloz from Switzerland battling it out for a place in the final. Liam Whaley, who was also in this heat, sustained a knee injury and unfortunately had to pull out of the competition.
Maxime continuously increased his scores throughout the heat, with Erick and Alex taking turns following up in second and third place.
Alex Neto crashes in his last attempt, leaving him in 3rd position meaning Maxime Chabloz and Erick Anderson move on to the final.

In a Brazilian-Colombian battle we had Valentín Rodríguez and Juan Rodríguez from Colombia and Manoel Soares and Guilherme Costa from Brazil in heat 2, here’s how it went:

Juan Rodríguez starts off the heat with a solid 8.27 score, and it really shows how much work he’s put in this year. Apart from this, we’re not seeing top moves and scores in this heat, with Guilherme Costa getting unlucky with his landings and current World Champion Valentín Rodríguez crashing on almost every trick attempt, so he ends up in fourth place, Guilherme in third, and Manoel Soares in second and Juan Rodríguez in first position going to the final.

Next up is Mika with a big Heart Attack, scoring 8.77 and taking the lead. But Rita, with a perfect Hinterberger 3 and a 6.73 takes first position.

The two of them are really battling it out, with Mika setting the bar high at a straight 9.00 score, taking back the first place from Rita. Rita answers with a huge S-Mobe, scoring 8.63 and taking over the lead once again.

Pippa and Claudia are at this point comboed out for first, but second is still up for grabs.

Pippa is on Rita’s heels, but misses her landing and doesn’t get the score she was going for.

Pippa’s final trick attempt is a big S-Bend 1 with a 7.2 score, but she’s still in third place.

Claudia attempts a final move but misses her KGB, meaning she comes in fourth overall after a very good fight.

Rita ends her heat with a last trick, a very nicely executed big Heart Attack and an 8.77 score, finishing second after Mika who lands a Backside 313 as her final move and wins the women’s division of the SuperKite Brasil 2020!

Men's Final
In the men’s final, we had Maxime Chabloz, Manoel Soares, Erick Anderson and Juan Rodríguez in the race for the title!

Maxime opens the final with a 319 but didn’t get a clean landing and only scores 3.57.

Erick Anderson brings a perfect Stalefish KGB 5 to the table, making the crowd go wild and earning him a whopping 9.37 to begin his heat with.

Maxime Chabloz is on his second trick attempt with a Double Grab Mobe 5, gets a solid 8.50 from the judges for his signature move, and a lead in the heat.

Up next is Manoel Soares with a stylish 319, especially considering the light wind conditions, scoring high and taking the lead From Maxime.

Juan shows an average 317, nothing to excited about or get him out of fourth position.

Next, Maxime is at it again with a grabbed Slim 7 scoring a huge 9.43 and earning him a comfortable lead over Manoel who unfortunately misses his landing, but remains in second place.

Erick Anderson is up next with a powerful perfectly landed Slim 7 scoring a good 8.47. This means it is still possible for Erick at this point to take the lead or move to second position, but very difficult for Juan Rodríguez in fourth place.

Manoel’s big statement Slim 7 gets him a solid 8.80 and closes the gap to Maxime’s lead, Erick Anderson however takes the second position from Manoel with a big score of 8.63 on his fifth trick attempt and a huge overall score of 34.33.

Maxime lands a Stalefish KGB to Blind in his sixth attempt, getting a huge 9.00 and taking the lead again.

Juan Rodríguez doesn’t get out of his last place in this heat unfortunately, with only one trick attempt left, while Maxime finishes with a grabbed Mobe 7 scoring a perfect 10.00!

Up next is Manoel with a grabbed KGB to Blind to finish off the heat, but only scores 6.23 and remains in third position, so the title goes to Swiss Maxime Chabloz, with Brazilian Erick Anderson in a close second place!

We would like to congratulate the winners of the GKA Freestyle Super Grand Slam 2020, Mikaili Sol and Maxime Chabloz!

But our congratulations also go out to all competitors for displaying the highest athletic standard as well as outstanding sportsmanship and compliance with the sometimes difficult rules and regulations in place to keep everyone safe and healthy in the Covid pandemic.

We also would like to extend our best wishes to Liam for a speedy recovery.

A Word From the CEO
Jörgen Vogt, CEO of the GKA:

“Many thanks to our GKA crew, as well as the local crew, our local organisers and the team at Hura Beach, without whom this event would never have been possible under these extraordinary circumstances, but we made it work and showed that it is indeed not only possible to run a kiteboarding event in these times, but to make it a very successful one also!”

is there a stream available to watch finals (and maybe semifinals too ) anywhere?
Top