merl wrote: ↑
Fri Dec 02, 2022 11:15 am
One aspect of Peaks which I appreciate is the ability to launch them in an area with a significant wind shadow. When landing in such spots there is even a risk that the kite will fall from the sky, but if it does, it comes down very softly (as long as there are no bushes or trees). I cannot see this working well with an LEI, even a very light one.


Of course every spot is different, but I often hot launch small LEIs in wind shadow using pull on center lines to get kite off the ground and into the wind. Not much different than Peak but of course with Peak it is probably a bit easier to do this.

Peaks (or Hybrids) are in a league of their own in this respect, even compared to the smallest LEIs, no comparison in my experience.

As precisely what merl wrote is so spot on and literally a game changer for me, possible to launch in conditions (between things and huge wind shadows) you would never consider with a small LEI

And land also in this.
It opens up a whole new world of easy and safer launches (or landings but also easy with a LEI)..

Having recently experienced the thrill of riding the UFO 3m in high 20s kts at 80kg on T1 monofoil I am now 100% decided it is the superior high wind kite vs the small Peaks. It has rock solid canopy, amazing speed and guaranteed re launch in hairy conditions. Yes the Peak 3m has a lower high end range but also way too much canopy noise at higher winds, way smaller power zone in the throw and the annoying feature of all Peaks that you have to keep the bar 50% sheeted to engage any power - eg the Peak is super binary re on or off. The 3m UFO drifts almost as well in high winds and is the hands down winner. Not dissing the Peaks for lower winds re their impressive range as I find the UFO 9m almost unridable re the bar pressure, sulking deep in the wind window proclivity and frustration re water relaunch in light / lower end wind. In sum, the UFOs at 3m and 4m should be your higher wind foiling kites of choice and only start using the Peaks at the right sizes for sub 20 kts. Personally I find the 5m UFO a lot of fun in high teens kts. and then would rather ride a 6m soul and 9m sonic than say a 4m and larger peak to avoid the bar pressure and inability to fly forward in the wind window that are consistent faults in all Peaks.

Not that I have strong opinions on this topic. 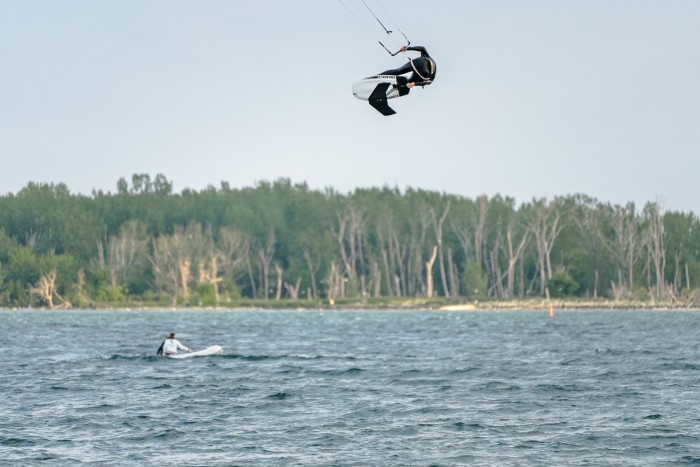 Late to the party with Peak 4s after reading about them since they came out, but been foiling a long while.
It seems all kites for foiling are still evolving and I’m sure the holy grail of foiling kites is still to be designed and there’s more excitement to come.
Top

As foils are evolving…………. and very keen to try the Triton T1

norcom wrote: ↑
Fri Mar 26, 2021 1:59 am
Have a quiver of Peak4's 3/4/5/6/8/11m and bought the UFO 5m. Sadly the UFO doesn't come close to recreating the Peak4 feel. I wanted to foil in overhead waves and figured I would give it a try because Peaks have their limits too. The UFO feels slow compared to the Peaks, has WAY too much pull when looping and doesn't drift anywhere near as good. I've only used it once in pretty powered up conditions but I think my Best Cabo 5m is a better kite. It's a pretty light kite (I have the v2) and I should give the UFO a test in lighter wind but being spoiled by that Peak feel, it's hard to pump anything up these days. Crazy what those stringed up napkins can do.

Unfortunately after using only Peak4 kites with surf foils, everything else just doesn't feel as good

After 5 months of foiling on a Peak4 this season I went out on a 9m LEI surf kite and surfboard when the shore break waves were too big to get through with a foil. I was shocked how heavy and sluggish an LEI kite was and also how much more work to get upwind on the surfboard compared to a foil. Big waves were fun though.

I see this a bit differently.
I have spent my last two seasons exclusively with the Peak4 in 4 & 5 m² foiling in small waves and I thought this kite is unbeatable in those conditions, I really fell in love with the Peaks.
Then I gave the UFO a try because I could get my hands on a pair of used ones for little money. The 9 m² is rubbish, I sold it after 2 sessions.
The 5 m² UFO became my new favorite really. Initially I didn´t like it because it is very different to fly compared to the 4 m² Peak (much more sensitive to backstall / oversheeting and less intuitive to fly). After slowly getting used to the UFO, it is overall the better kite for me. So much more playful than the Peak, faster, lighter feel, way better light wind performance, zero flutter. The drift of the UFO is slightly worse compared to the Peak, but the difference is acceptable for me. And it is over compensated by the fact that you don´t have to afraid of ending up with a sunk kite which might be dangerous to recover, particularly if you´re out in the surf.
Last edited by Onda on Wed Dec 21, 2022 4:45 pm, edited 1 time in total.
Top

I feel like you have to be pretty wound up on the 5 to drop to the 3.

I have a little off-subject UFO V2 related question: I noticed that some have a white LE, some have a black LE.
Does anybody know why?
Cheers.

I have a little off-subject UFO V2 related question: I noticed that some have a white LE, some have a black LE.
Does anybody know why?
Cheers.

I believe there was a shortage of white so some are black.