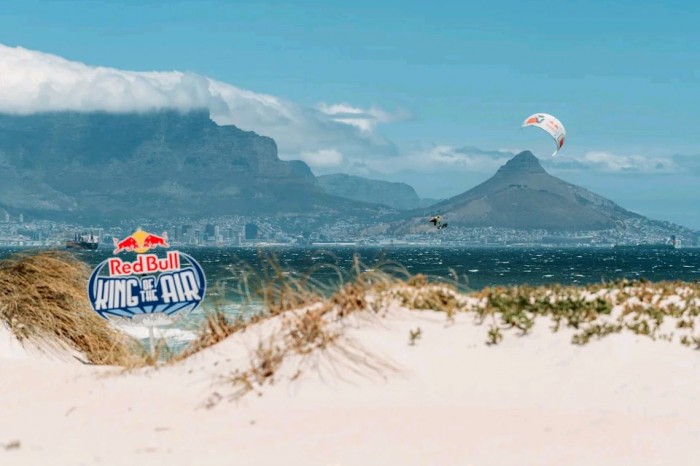 Full rider list announced for the the most prestigious title in Big Air kiteboarding and it features a mix of past champions, local favourites and new faces.

After being postponed from its traditional slot early in the year, Red Bull King of the Air 2021 is back on! Now scheduled to take place at Kite Beach in Cape Town on the windiest day between 13 November and 3 December, the event will feature an all-star list of Big Air riders.
The fleet is composed of the Top Three finishers from 2020; the winner of the Fly-To Red Bull King of the Air satellite event as well as video entrants…

The 2020 event saw Hawaiian top gun, Jesse Richman out-class past champions Nick Jacobsen (DEN) and Aaron Hadlow (UK) to claim his second crown. All three will be back once again to claim a stake at the throne. Also joining them will be three-time champion Kevin Langeree, who won the Cold Hawaii Games in Denmark in September, the only event in the Fly-To Red Bull King of the Air series that took place in 2020.

Joining them will be various new names, thanks to the resounding success of the video entry process. According to Sportive Director Sergio Cantagalli, the event committee was overwhelmed with the amount of entries - in a year that has been super challenging for professional sport, it was the biggest batch of entries ever received. “The sport is definitely becoming younger,” Cantagalli commented. “We were honestly amazed and didn’t expect such a large amount of new talented riders sending in video clips.”

The panel of judges selected the top video entries by judging the riders on the same criteria as they would, if they were performing live during the event. “It was a challenge for the panel,” Cantagalli added. “There were so many good video clips, but it’s important to remember that Red Bull King of the Air is not ‘just’ a Big Air contest, our aim is to reward the most complete Big Air rider in the world: the one rider that brings the complete package of height, power, extremity, technicality and innovation to the table on the day. This had to come through in the videos too.”

Rest of the fleet (in alphabetical order)

Lets hope they don't lock the beach down on them...
Top

Let's hope people can be able to watch the show live.

My money is on Janek.