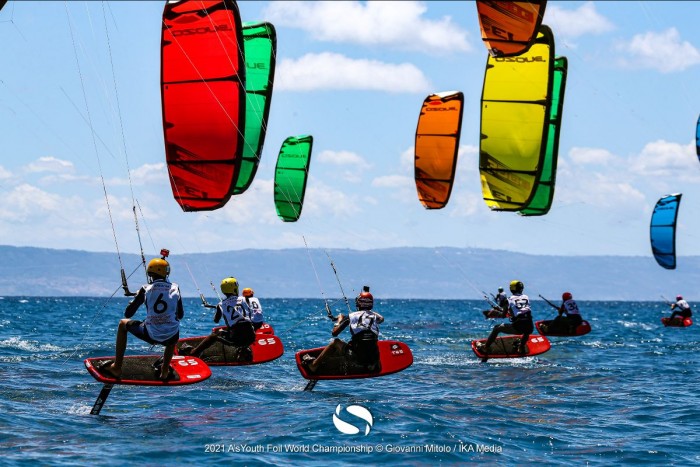 Four more races are on the scoreboard tonight for all of the three fleets of young athletes from 25 countries. On day three of the U19 and A's Youth Foil World Championships in Gizzeria, Italy, the conditions were back to classic, with a thermic breeze going from 12 knots in the first race to around 20 in the afternoon, flat sea and the air much cooler than the previous days for everyone’s happiness.

Only the battle on the racecourse was just as fiery as the previous days, with the young ones as fierce as the older athletes, this is what everyone comes here for: tight, fast races on foiling, super-fast boards, pushed by the wind on the water. Two different youth classes are sailing in Gizzeria this week, the fast-and-furious Olympic Formula Kite class, registered series production foiling boards with super fast hydrofoils combined with paragliding-like foil-kites for the extra bit of power, and the new one-design A’s Youth Foil class, all equipment being exactly the same red board with less sharp foil and inflatable tube kites. Both are high performance equipment, both give plenty of adrenaline to the rider, but in the equipment that will be used in Paris 2024 it is all about performing to the max, going faster at wider angles, while the Youth Foil equipment cares more about the development of the young competitors, being slightly slower, with less lift from the easier to control foils. The kites of the A’s have the traditional inflatable tube, which provides an extra bit of safety and easier training and coaching possibilities with support boats
“It is a really good starting kit for the youth with a shorter mast and easier to handle kites, so they can get their first few races in on the course, get experience around the marks, and then hopefully step over to the Formula Kite and go a bit faster” explained Formula Kite rider Sam Aben (NED). “The fun is the same, cause sailing is the fun part, the battle on the water is what everyone is here for”.

In the Formula Kite Men fleet the amazing Maximilian Maeder (SGP), just 15 years old, proved to be an the best all-round sailor winning all of the four races even in the lighter breeze, with Riccardo Pianosi (ITA) catching up right behind him at every finish line except for Race 10, in which he stumbled on a fourth place. Same fate for Jis Van Hess (NED), who is third overall with a third in every race but the jinxed 10th race.
“Today was an interesting day on the water, with a mix of conditions, the boys were powered on the 15 at the beginning, someone with a 21, and then later on even down on the 11.” Dutch competitor Sam Aben commented. “I am happy with my performance, I am stable fifth overall, and I would be happy to go the Semis. Tomorrow and on Sunday it might be a little lighter and I’ll try to get not to many points on the board”.

The day in the Formula Kite Women fleet was more balanced, with two wins for the provisional leader, Julia Damasiewicz (POL), one to the runner up Magdalena Woyciechowska (POL) and one to currently third-ranked Nina Arcisz (POL), but all of the races today were won by Poland, the dominating country so far.

Polish is also the leader of the A’s Youth Foil, Jan Koszowski, with six bullets in the series, today he didn’t manage to cross the line ahead of his Russian opponent Mikhail Novikov who had the perfect day with four wins in a row. The margin between the two is now only down to one point, and we expect sparks on the course on the weekend among the two Under 17 riders. Angelo Soli (ITA) is third, not too far behind, but he was out of the duel today.
“It was a bit less windy than yesterday, it was super nice racing, and it was again a fight among the three of us (Novikov and Soli, ndr). It wasn’t my best performance day, I hope I will do better tomorrow, cause there’s only one point between me and Mikhail, so it’s really close, but of course I hope to defend the leadership like I’ve done so far”, said Jan Koszowski. “I love kiting, and particularly racing, for the speed, the battle with the others it is just so much fun, that's it!”.

Some possible weather hurdles for the weekend might affect the schedule, that should see the Medal Series with semi finals and finals on 'Super Sunday'.

Re: 2021 Formula Kite and A's Youth Foil Worlds - Gentler conditions open up the games in the A's

I'm just wondering why they chose a such a super wide board (47cm), especially for younger/lighter riders. Compared to the adult riders the mast is shorter so the wide board makes it really, really hard to heal over in strong wind and waves.
Isn't there any other narrower production board on the market?
Top

Re: 2021 Formula Kite and A's Youth Foil Worlds - Gentler conditions open up the games in the A's