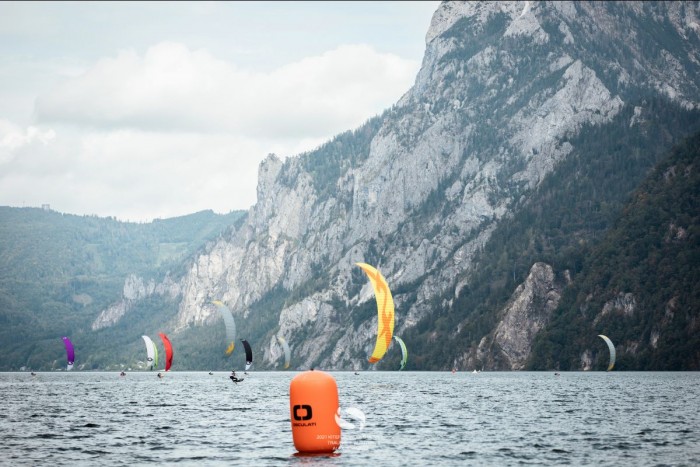 The opening round of the KiteFoil World Series Traunsee stop got off to a dramatic, if stuttering beginning, amid the splendour of striking Austrian mountains that offer a glorious backcloth to the lake’s racetrack.

With a challenging weather forecast for the first day of racing in the UPPER AUSTRIA KiteFoil Grand Prix, which is hosting the World Series tour stop, the race committee was eager to get racing under way.

But as the race started with the kiteboarders on their biggest 21m and 23m kites, the fickle 7kts to 8kts breezes were fading at the top mark of the course, which is sandwiched by mountains.

Growing numbers of riders were unable to tack on the course’s right side near the mark, which was sitting in the middle of a windless patch, and kites started falling from the sky. The race committee were left with no other option but to abandon the race for the sake of fairness, even though a few lucky riders might have eventually been able to round the mark complete the two laps of the windward-leeward course.

As rain closed in and put paid to any possible thermal breeze, racing in the International Kiteboarding Association (IKA) KiteFoil World Series Traunsee—the tour’s second stop after Gizzeria, Italy, in July—was suspended for the day.

Twenty-nine of the world’s fastest kitefoil racers—21 men and eight women from 15 countries—have travelled to compete in the four-day regatta for the €15,000 prize pot, which will be shared equally between the genders.

Many made a special point to come to the event, sponsored by Upper Austria Tourism and Raiffeisenbank, because of the breathtaking mountain backdrop and fresh, flat water that is a rare change for the athletes.

“There are really not many places in the world where you get to race between great, beautiful mountains,” said Britain’s Connor Bainbridge, who won gold with Ellie Aldridge in the IKA Mixed Relay Europeans in the same venue last year. “It’s just stunning.”

Bainbridge was happy to have made it round the course once before the race was abandoned. He has experience of the track and learned to manage its sometimes tricky, shifty breezes that give racing an added dimension.
“It’s so different from the sea and the breezes we normally have to deal with,” he said. “The water is flat and the wind, if light, is usually pretty consistent. It makes it an easy venue where everyone goes very fast and the racing is close.”

Germany’s Florian Gruber is also a huge fan of Traunsee. “It’s so beautiful,” he said. “It’s my favourite spot. It’s really like my home spot. Even though today didn’t quite work out, we’ve got three more days. Everyone here is enjoying this event because the pressure’s off a little, and that gives them confidence around the race course.”

Croatia’s Martin Dolenc, another veteran of the track, despite the race being abandoned, managed to complete the course and cross the finish line first. He remained philosophical and able to enjoy the fabulous setting.

“It was really nice to be at the front of the fleet here,” said Dolenc. “It’s a really special place. Part of it is knowing how to read the wind on the track. If you can do that, you can come out on top. Most of all, though, it’s much more social. Everyone’s relaxed and enjoying the vibe. It’s a complete change from the Europeans last week.”
Top