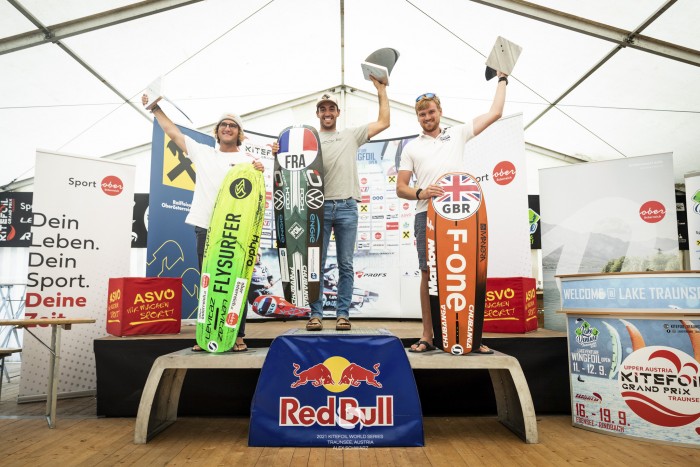 Frenchman Axel Mazella clinched victory in specularly close racing, in tricky conditions, on the final day of the KiteFoil World Series Traunsee, in Austria, fought out against a dramatic mountain backdrop.

But to take the trophy, Mazella had to see off stiff challenges from rivals that ensured he had to share the bullets from closing day’s eight races with four other competitors who pushed him all the way.

Just a week after Mazella seized the Formula Kite European championships crown, the 24-year-old took the podium’s top step and a share of the €15,000 prize money in the globe-trotting tour’s second act hosted by the UPPER AUSTRIA KiteFoil Grand Prix.

With victory in Austria, Mazella climbs to the top of the World Series’ standings, after he earned a second place at the first act in Gizzeria, Italy, in July. The upcoming stop, off Cagliari’s Poetto beach in Sardinia, next month, is one of three further events that will decide the International Kiteboarding Association's (IKA) KiteFoil world champions.

“I’m really happy,” said Mazella. “It’s sweeter because the conditions were really difficult. The wind was so gusty. It shifted a lot over the racing. So, any strategy was extremely difficult and I just tried to go as fast as possible. It was like playing poker. I’m overall tour leader, but for sure there’s a long way to go.”

The climactic fourth day of the UPPER AUSTRIA KiteFoil Grand Prix, sponsored by Upper Austria Tourism and Raiffeissenbank, finally delivered the classic conditions the strikingly-scenic lake is renowned for.

After the regatta’s first three windless days, when no racing was possible, the north-easterly thermal developed early, from around 10kts, building to 14kts, blowing over the flat fresh waters. Perfect conditions for high-octane kitefoil racing.

Thirty-one of the world’s fastest racers, 23 men and 8 women from 15 countries, had journeyed to the picture-postcard village of Rindbach, Ebensee, to fight for the prize. After the frustrations of waiting for the wind, all were stoked to battle in the last day’s eight short, sharp races. 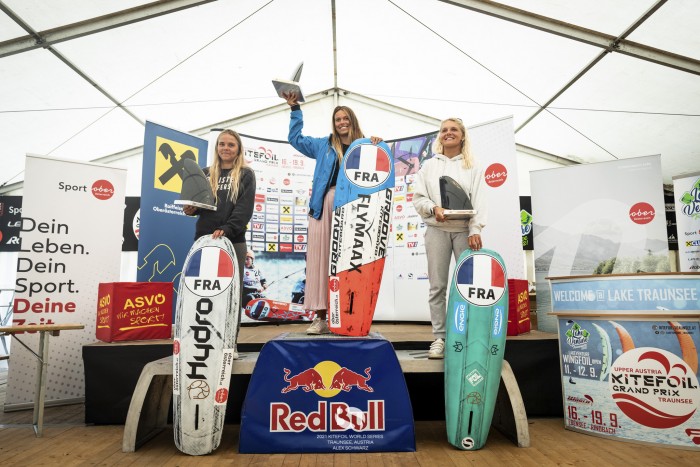 With the women racing in one fleet with the men, the sight of the 31 kitefoil racers blasting around the windward-leeward track framed by high mountains under cloudless skies was thrilling and awe-inspiring.

The incredibly tight action on the course was a fitting match for the dramatic mountain backcloth. The margins between the top men were extremely fine, with positions constantly changing and the bullets shared five ways.

Mazella claimed two bullets and four second places that were enough to secure the overall win. But in the penultimate race he retired after tacking in fickle breezes near the weather mark, mistakenly touching the kite of countryman Théo de Ramecourt, who almost crashed but was able to finish.

De Ramecourt was racing on a 23m Flysurfer VMG2 kite and R5 foil by Levitaz, an Austrian brand and one of the Grand Prix’s sponsors. De Ramecourt, a development rider for both the kites and foils, scooped three bullets but was just overhauled on points by his compatriot.

“The races were really quick, and really intense,” said De Ramecourt. “With the shifty, gusty conditions it was always a little bit of a gamble. It didn’t always pay off for me. But I had good speed. It was great to get some racing in, and I’m really happy.”

Britain’s Connor Bainbridge broke the French stranglehold on the podium with a third place. He grew faster and more consistent towards the end of racing, taking a bullet and a second position.

“Considering the slightly sketchy conditions we had fantastic racing,” said Bainbridge. “In the small fleet there’s such a different vibe among the top six guys who are so close,. Everyone’s cool and gives each other space. It was great to come here.”

On the women’s podium, the strong French team had no challengers. Lauriane Nolot claimed the top step and a slice of the prize money that will be shared equally between the men and women.

“I feel so good,” said Nolot. “After the Europeans I wanted to take some time for myself. So it was nice to come back here and take a win, especially as the racing was really tricky in the conditions. I made a decision just before the start to take my 15m kite, instead of the 21m kite, and it worked for me. I’m so happy.”

On the regatta’s final day which is featured on Facebook Re-Live, the Grand Prix also hosted the Austrian KiteFoil Championship with the elite racers’ ranks swollen by local riders. It was won by Levitaz Kitefoils’ chief Adrian Geislinger, an appropriate climax to the event.

Re: France's Mazella triumphs in thrillingly-tight racing at close of World Series stop in Austria

Users browsing this forum: No registered users and 19 guests