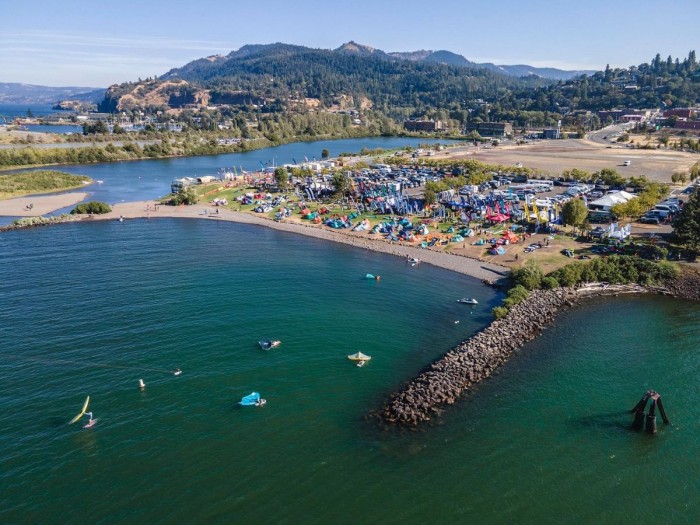 After a one-year hiatus, 2021 marked the return of the Association of Wind and Water Sports Industry trade show. AWSI exists to support and provide representation for windsurfing, kiteboarding, wing, foil and stand-up paddleboard companies.

Hood River is the perfect location for the AWSI trade show as the Event Site features a rolling lawn down to the waterfront, making for an epic rigging location to house the plethora of gear that the trade shows hosts.

Spread out over 4 days, the event featured brand demonstrations from Naish, Slingshot, Ride Engine, F-One, Manera, AK Durable Supply, Airush Kiteboarding, Freewing, and more. Some brands went in-depth with their product lines and offered up full line presentations while others kept it concise and focused on their values, mission and future goals. Gear demos were available throughout the day and a light, steady westerly breeze meant lots of water time for retailers, brands and athletes alike.

Starting at 8am each day, the waterfront was littered with foils, wings, kites, surfboards, and twin tips from the 20+ brands that exhibited. The industry was out in full force–the who’s who of Kiteboarding and Wingfoiling were present with legends such as Robby Naish, Titouan Galea and Jesse Richman milling about. Brands, retailers, distributors and athletes were eager to talk shop, stoke one another out and see familiar faces.

The wind was off and on through the event but luckily the first two days were bright, sunny and hot. As the wind filled in, forecasted, eager attendees started making their way to the water. The ability to test the gear that the brands have been working on for so long is one of the absolute highlights of the AWSI and participants made their way to the river for lots of sessions.

Another highlight of the week were Jesse Richman’s tow-ups as he got pulled behind a jet-ski with his 15meter kite and released some 50-70 feet in the air sending board offs and front rolls on the way down. The rest of us sat on the beach drinking beer and cheering him on.

After 3 full days at the waterfront and with the industry out in full force, brands began breaking down and loading up to head home. With the first AWSI event in two years, we were all eager to talk shop, mingle and try out new product. The overall tone of the event was one of gratitude and stoke as we all get to do what we love, in a beautiful location, with awesome people and friendly faces. 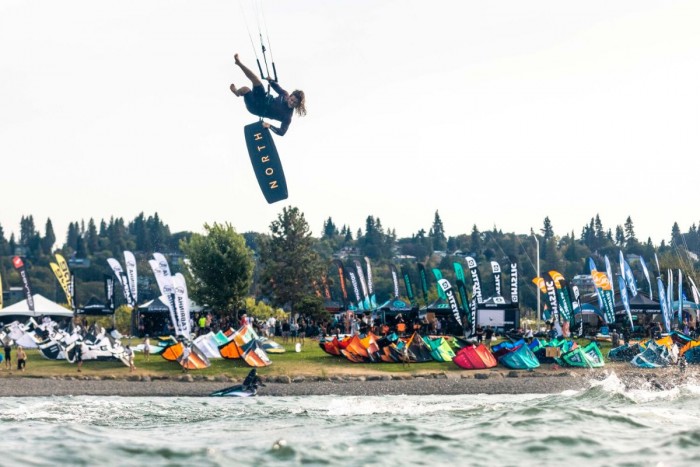