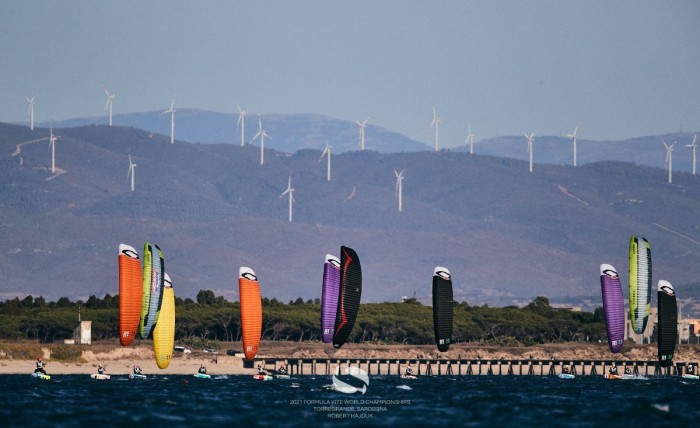 The fight for the Formula Kite world championship titles, being contested on the sumptuous Gulf of Oristano on the Italian island, shifted into high gear with drama all over the track in tough conditions that left some leading contenders in difficulties.

In the massively-shifty offshore breezes that gusted to 25kts, even the reigning world champion, US’s Daniela Moroz, suffered some tough moments. She missed a race when she failed to make one start after her kite fell and she got stuck in fishing nets, though she still retains the overall lead by the slenderest of margins.

France’s Théo de Ramecourt also had some tricky moments on the trapezoid course, off the beach at Torregrande. But the mercurial Frenchman capitalised in the difficult breezes on flat waters to score a perfect four bullets that sent him top of the order.

On the second of the regatta’s five scheduled days, the race committee got in a full quota of 20 races for the men’s and women’s fleets. With starts almost like clockwork every nine minutes, the short-sharp races were searingly-quick.

A total of 138 athletes—89 men and 49 women from 34 countries and six continents—are battling for the men’s and women’s International Kiteboarding Association (IKA) Formula Kite world titles for the first time in more than two years after a break because of the pandemic.

It is the biggest kitefoil fleet ever assembled. The event marks the first Worlds of the Olympic cycle in which kiteboarding will makes it debut at the Paris 2024 Games and explains the huge level of national interest.

The men are divided into three seeded fleets, while the women are split in two, for three days of the qualifying series. On the penultimate fourth day, the top athletes will battle in the final series, with the leaders going forward to the climactic last day’s medal series, to decide the champions.

The strong French team, with a squad of 21, pressed hard and asserted their dominance in one of the women’s fleets. Lauriane Nolot stormed around the track and grabbed three bullets that left her just half a point off the overall lead.

But Nolot, battling against fellow countrywoman, Poema Newland, knew she had her work cut out. Nolot managed to keep her rival a bay in most of the duels, but missed a gybe in one race after leading throughout, allowing Newland to squeeze past on the drag-race to the finish line.

“It was nice fighting with Poema,” said a smiling Nolot. “But in the second race I crashed my gybe in a hole of no wind. I finished, but she managed to just get passed me. I’m happy. It was such fun.”

Newland, the Formula Kite European champion, relished the battle even in the increasingly-fickle breeze that left mostof the fleet swimming when they hit a huge wind hole near the first top mark in their final race.

“Near the top mark we were all swimming,” said Newland. “I crashed in the tack, but I managed to get going again quickly. In the end I’m happy because the conditions were so hard and I surpassed myself. If it hadn’t been so tricky, it would have been perfect. But it would have had less ‘game’.”

If anything the US’s Moroz had a tougher day in the alternate fleet, despite the two bullets that kept her top of the order. Uncharacteristically, she crashed a gybe in her day’s third race that left her finishing fourth, and failed to start the final race.

“I was talking to my coach, sitting on the boat after the third race,” said Moroz. “Whatever way the coach moved forward, my kite fell out of the sky. My kite was in the fish farm, and I was outside the ropes holding on. I couldn’t get my kite up and my it was filling up with water. I missed the fourth race in the end.”

Men’s leader De Ramecourt was stoked with his performance of four wins from four, all the more pleasing because he felt the conditions were spectacularly difficult.

“I don’t think there are any words to describe how hard it was,” said De Ramecourt. “There were really, really big gusts and really, really big holes. Massive differences in pressure. I like to deal with the wind and how it works. And I got four bullets.”

Just behind on the leaderboard, the newly-crowned Formula Kite Open European champion, Singapore’s Max Maeder, 15, had a good outing, scoring two bullets and a second in an alternate fleet.

“For me it’s important just to be consistent, no matter what the conditions throw at me,” said Maeder. “There is always some good competition, but it’s about taking your opportunities. I didn’t expect to find myself here, but I’m pleased. It’s a good start.”

Britain’s Guy Bridge had a different strategy to deal with the challenging weather, one that seemed to pay off and earned him two bullets in his fleet, leaving him fourth on the leaderboard just behind France’s Axel Mazella.

“It was super-shifty,” said Bridge. “If you got the gusts and the shifts, you were doing well. But there were 40 degree shifts. So, if you found yourself on the wrong side of that and not doing well, you do something else and pray. I’ve never kited in such crazy conditions.”

Only a point adrift behind, Italy’s Riccardo Pianosi, 16, who will represent his country at the World Sailing Youth Worlds in Oman in December, took two seconds and two thirds, revelling in conditions that humbled some of veteran rivals.

“I finished my day well, so I’m really happy,” said Pianosi. “It’s difficult, but I love these gusty, shift conditions. Now I’ll try to stay positive for the days to come.”

All the closing action of the Formula Kite Worlds finals series and medal races on Saturday and Sunday will be featured on Facebook Livestream.