These wings are THE STIFFEST WINGS ON THE MARKET by a significant margin, offering true next-level perfomance to anyone who gets hold of one.
Read on and find out how our new Glide series is set to change the course of wing riding forever... 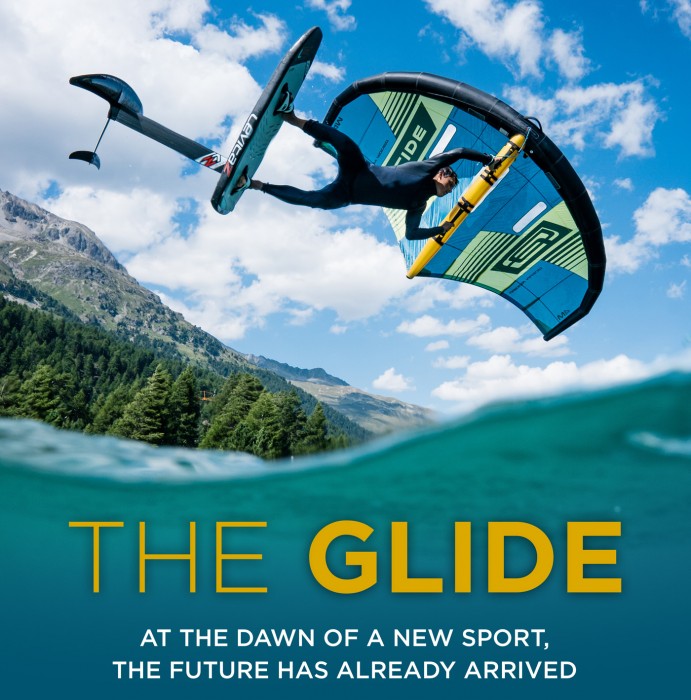 "The HL-Series is the perfect wing for freestyle action! The Glide HL gives freedom of movement for the rider and total control during tricks. This is the wing that I am using the most during my Freestyle/FreeRace sessions.
The weapon for wingfoil races, speed runs, high jumps and radical freestyle tricks is the A-Series wing. The central strut is full ALLULA which gives this wing an unbelievable stiffness and power. In gusty winds, the wing generates massive acceleration."
- Mathis Ghio Pro Rider

Ross Harrington's Glide insights...DESIGNER ROSS HARRINGTON ON WHY THE GLIDE IS SUPERIOR TO OTHER WINGS...

Why did you decide the time was right to move into the world of winging?
In January 2019, we attended a kite boarding trade event in Cape Town and a few other brands were discussing the new sport, wing foiling. A few reputable brands had already committed resources to develop wings at this point, so the game was on and we were aware of the developing market.
At this time, we were very busy developing the ALUULA composites and decided to focus on this as ultimately we knew ALUULA would be amazing for wings. This combination was vital and we were in no rush to be the first to manufacture wings. We came to be the best.

What are the key features of the A-Series and HL-Series Glides?
Both A-Series and the HL-Series are ultra-light and stiff, making one handed drifting and wave riding effortless. The shape is a combination of a swept platform with a defined progressive twist that allows the wing to remain stable one handed, or even off the leash.
The A-Series is truly next level, with its full ALUULA airframe the A-Series is quite simply the stiffest wing on the market by a significant margin. The ultra-stiff and lightweight wing stays stable in overpowered conditions extending its usable range, while at the same time excelling in the lighter conditions due to the stiff leading edge and extreme low weight.
We’re pleased with the positioning of the soft handle system. These are nicely balanced and comfortable to use. Then we have a hard 2 piece handle and a long one-piece handle coming soon. These will be fittable to all OR wings via the matrix system.

ALUULA is lighter and stiffer than the industry standard Dacron airframes. How does this affect the performance of the wing?
After much research into materials, dimensions and frame diameters, it was obvious that ALUULA significantly improved the performance. The stiffness of the ALUULA airframe increases the power generation and response of the wing, as well as stabilising the draft and twist. This means the wing will easily get going in light winds, while still being able to handle strong winds without deforming or becoming hard to handle. The lightness of the ALUULA makes an airframe with very low swing weight, making handling and drifting feel effortless.

No doubt this is good, but there's still a bit of overhyping...

"Better for travel. When two A-Series wings weigh the same as one traditional wing, it’s a no-brainer…carry more gear on your trips with less fear of excess baggage charges. "

which is a bit more than claiming

others.
And all of that should be substantiated by publishing the weights of their wings.

Anyway, good luck to you Ocean Rodeo, have yet to see one of those in the wing landscape.
Top

Brand Affiliation: None
Has thanked: 50 times
Been thanked: 47 times

In light winds, I can appreciate having the rigidity in the frame for pumping up and getting going and maintaining flight during luffs. These Aluula wings will be outstanding in the low end and worth the dollars.
But I cannot see the $ value once the wind is over 20 knots,
Top

I only have a 5m so can't speak to the higher wind benefits yet. But my thinkng is that a stiffer frame with a small wing may similarly extend the wind range as for the big wing. So if a 3m isn't normally comfortable until 30kt, maybe it starts at 25 if frame is stiffer? So maybe a 5/3 quiver vs 6/4m yet to be determined.
Top
Post Reply
4 posts • Page 1 of 1