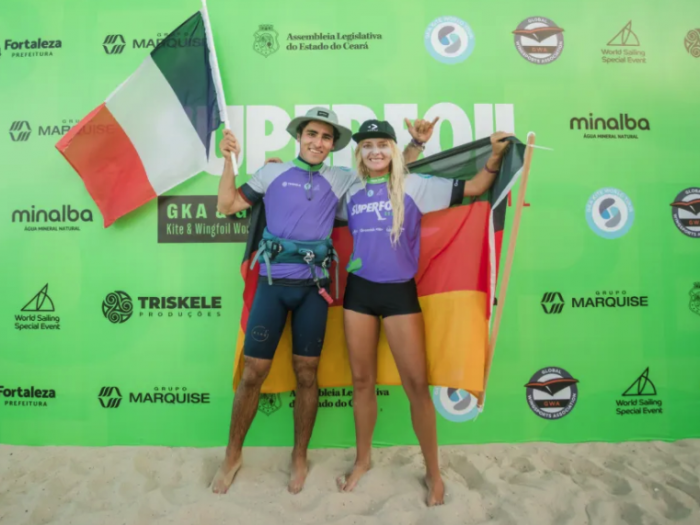 It was another perfect day for the GKA Hydrofoil Freestyle World Cup in Fortaleza, as the wind was pumping at 20-22 knots and the top hydrofoil freestylers in the World were ready to put on a show for the completion of this competition. The criteria remained the same, with the athletes given 15 trick attempts, with the top 4 scores counting. Congratulations to Charles Brodel from France for taking the event win and becoming the Men´s Hydrofoil Freestyle World Champion and, also, Maike Elisa Mueller from Germany for taking the event win.

Yesterday we did a single elimination for all four women. Where Maike Elisa finished first, Samuela Mule second, Kylie third, Aurore Gineste fourth. These were not the final results as they would all have a second chance today to climb up the double-elimination ladder and win the event.

Kylie Zarmati from the USA managed to defeat Aurore Gineste in Round 2, and then went on to face Samuela Mule for Round 3. Samuela started strong, gaining good scores for her first-ever competition, but Kylie managed to gain the advantage with some good tricks that allowed her to advance to the next round.

The women’s final was action-packed as Kylie Zarmati battled with Maike Elise, both athletes wanting to steal the crown here in Fortaleza. Maike managed to fight her way to the very top, gaining an overall score of 12.57 points, and securing a first place on the podium.

“I’m really tired,” said Maike. “The wind really dropped during my heat, so it was hard work but I really did my best. I’m so excited about this result. Thank you to all of my friends who have helped me get here today.”

Men’s Round 3 was completed yesterday, where Robin Stewart from the USA advanced over Joselito del Rosario from the Dominican Republic. Robin advanced to the Semi-Finals joined by Charles Brodel from France, Cesar Natoly also from France, and Maxime Desjardins who defeated Fred Hope in an extremely close heat.

Men’s Semi-Final 1 was first in sequence today, where Charles Brodel went up against Robin Stewart. Charles was unstoppable with solid scores throughout his heat. He finished with an overall score of 24.54 points and locked down his spot in the final.

The second semi-final was between Cesar Natoly and Maxime Desjardins, both young riders from France. Maxime was smashing out trick after trick and gaining a strong lead at the start. Natoly was riding strapless, so both athletes were really adopting a different style during this heat. Finally, it was Maxime Desjardins who pushed that little bit harder in the final moments and advanced to the final, with his powerful moves really gaining the judge’s attention.

The Small-Final between Cesar Natoly and Robin Stewart had to be re-run due to a technical issue. Both athletes were riding strapless which added an extra dimension of difficulty. It was an extremely close heat with both riders performing with control and style. It all came down to the final moments, where Natoly could unfortunately not catch up in points, and Robin won the heat giving him the 3rd position finish for this event.

The final was an intense match-up between Charles Brodel and Maxime Desjardins. As Maxime had explained earlier in the competition, Charles has always been a big inspiration for him and one of the main reasons that he got into Hydrofoil Freestyle. This made the final even more exciting. Charles showed his experience and confidence from the very start. He rode with plenty of control and showed great speed and variety in his array of tricks. Young athlete Maxime battled his way through with some impressive trick attempts but failed to land several of his tricks. It was a valiant effort but it was Charles Brodel who stole the win, throwing out trick after trick, and having a great time whilst doing it. Charles Brodel is our new GKA Hydrofoil Freestyle World Champion, with a winning overall score of 30.02 points.

“I’m super stoked to win this event. I’ve been training a lot for this,” said Charles. “I loved sharing the final with my close friend Maxime, and I know he is going to continue doing really well.”

It’s been an incredible week of action for this new, rapidly-evolving discipline, and we look forward to seeing even more incredible tricks next year, as each rider is really helping to push the sport further and further each season.

Thank you to our event organizers, crew, and amazing athletes for making this year’s event such a success, and we look forward to returning to the shores of Fortaleza next year once again.

Tomorrow, the action continues with the GWA Wingfoil World Tour and on Sunday we will have the Best Trick Session. So keep an eye on our Socials as we will have more action coming soon!