The week comes to a close here in Fortaleza, where we have seen idyllic conditions for every single day of competition.
As we wrap up the event, we take a look at the current rankings and possible World Title scenarios, taking into consideration that we still have one final event left to close the season – The Tarifa Wing Pro from the 27th to the 30th of December 2021. 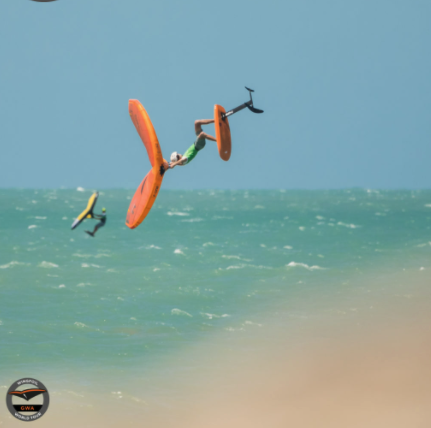 Titouan Galea may have suffered an early exit in the surf-freestyle discipline in Dakhla, but he has made up the lost ground with his win here in Fortaleza. Going into the final event of the year next month, Titouan only needs to finish 5th or above to be crowned Surf-Freestyle World Champion. If Titouan were to finish in 9th position or lower, that would open the door for Camille Bouyer, who could become World Champion if he were to win the event in Tarifa. The stage is set for an exciting show to conclude the 2021 season.

For the women’s side, Bowien van der Linden is now already officially our new GWA Surf-Freestyle World Champion, regardless of the result that she gets in our final event of the year. Bowien has been riding exceptionally well this season, winning every event in this discipline, and constantly pushing herself further with each performance.

“I really didn’t expect to win the World Title this year,” said Bowien. “With the first event in Leucate, I didn’t even feel that I was good enough to go, but my manager really pushed and motivated me. So it’s so cool, and I’m really enjoying the whole World Tour. It’s a great example for more girls to come, because you become more inspired when you come and compete, and become part of the community. I think we all push each other and help each other improve.”

Titouan Galea has proven himself unbeatable with his speed and precision this season and is now officially GWA Race World Champion. He has won all three events this year already, so is now the official champion, regardless of the result he gets in Tarifa next month.

“I’m happy to have won both disciplines here at this event,” said Titouan. “And I’m very happy to have won the World Title in the Race Discipline. I hope to do really well at the next event in Tarifa and be able to take the Surf-Freestyle World Title also. The organization of the GWA is fantastic, and it’s been a great event here in Brazil.”

On the female side, it’s a tight race between Olivia Piana and Bowien van der Linden, where it will all come down to our final event in Tarifa. If Olivia reaches 3rd place or higher in Tarifa, she will be crowned World Champion. However, if Olivia finishes in 4th or lower, Bowien would need to win the event to be crowned World Champion. Olivia took the win in both Leucate and Fortaleza, but missed our last event in Dakhla due to injury, which cost her valuable points and allowed Bowien to advance further. One thing for certain is that the Tarifa Wing Pro is going to be a major showdown between these two women!

This week also saw the first edition of the South American Race Championship where we have seen some incredible talent for riders of various nationalities. The final standings are as follows:

Now all focus shifts to Tarifa, Spain, where the grande finale will take place from the 27th to the 30th of December. The wind capital of Europe is the perfect location for this end-of-season showdown, where all of the top wingfoilers from around the World will come together for one last time this year.
Top
Post Reply
1 post • Page 1 of 1