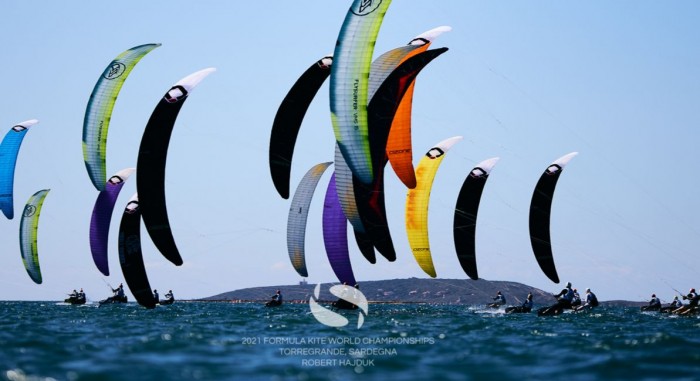 World-class foiling competition is about to get going in the year-round warmth of the Canary Islands, as 48 competitors line up for the start of the 2021 KiteFoil World Series Fuerteventura.

Today was registration day, and maybe a chance for some final practice. But a rare day of no wind on the Risco del Paso beach sent the sailors off in search of an alternative watersport, a bit of old-school surfing. Every day is a learning day, even when you can’t put a kite in the sky.

With some of the best kitefoilers in the world flying into Fuerteventura, this event is a big deal in the Canaries. Which is why there were a good many local dignitaries, councillors and VIPs in attendance for the press conference on the sandy beach of Risco del Paso, where the contest will begin tomorrow.

Sergio Lloret Lopez, president of Cabildo de Fuerteventura, said: “It’s great to have all these talented sailors here, some of whom will go on to race at the Olympic Games in 2024. We hope they enjoy their time here, and that they will treat Fuerteventura as their training ground for many years to come.”

Dunia Alvaro Soler, head of tourism of the municipality of Pajara, said: “With this competition we want to open the municipality of Pájara as a window to the world, making us known through a new attraction such as kitefoil. We hope that the weather conditions and our unique beaches will serve as a precedent to host this type of event during any period of the year.”

With Theo de Ramecourt injured and not able to attend, this puts his fellow Frenchman Axel Mazella in a strong position in the overall series. Mazella won the last event in Cagliari, Sardinia, but will be chased hard in Fuerteventura by the likes of Denis Taradin from the Russian Federation and Great Britain’s Connor Bainbridge. In the women’s division Poema Newland from France is highest in the overall rankings, followed by Lauriane Nolot (France) and Tiana Laporte (Italy).

Competition begins on Wednesday 24 November at 1300 hours local time in the Fuerteventura when the sailors will contest five back-to-back races. All the action on the climactic final two days of regatta on Thursday and Friday will be featured on Facebook Livestream.