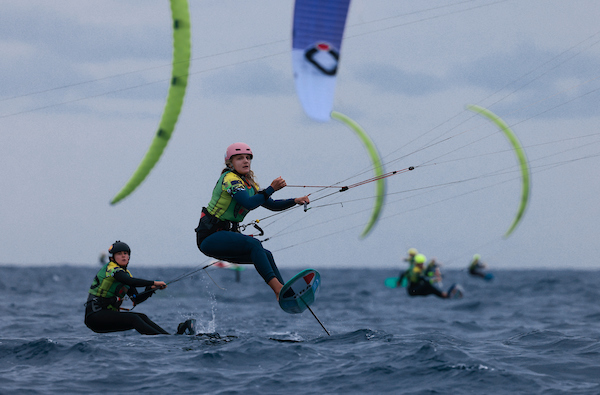 Earlier in the morning, when the postponement flag came down and the horn sounded for the riders to get ready, it was a game of chicken, waiting to see who put what kind of kite up in the air. Do you go big? But then what if the breeze kicks in? Do you go small? What if the wind evaporates and your kite glides helplessly to the water? Do you go early, or wait for others to test the waters?

Current leader of the 2021 KiteFoil World Series, Axel Mazella, was one of a number to venture out while others waited to see how they fared. As the wind dropped and returning to the beach became a challenge, Mazella had to pump his board with the legs to maintain the momentum if he was to avoid seeing his kite crash into the ocean. He got away with it, just. “It wasn’t that windy in the end, and when it rains it adds extra weight to the kite. I was glad to get back to the shore and keep the kite out of the sea,” said the Frenchman.

Coach to the German team, Chris Rashley, says that rain can play a significant role in your kite selection, which is never easy even on a dry day. “Depending on its size your kite might weigh between 2.5kg and 4kg when dry, and when rain is coming in through the air intakes and trickling out through the drainholes in the wing tips, that could add up to 2kg on the inside and outside surfaces of the kite. This can add a significant percentage to the overall weight of the kite, so when it’s raining you might go up a size on your kite selection to add more power.”

Recently crowned Kitefoil World Champion Theo de Ramecourt injured himself while training out of the Olympic venue in Marseille a couple of weeks ago, causing damage to a ligament when falling off the board. Lying second behind Mazella in the overall standings after three World Series events earlier this season, de Ramecourt was gutted not to be able to continue the battle in Fuerteventura. Instead he’s part of the live commentary crew, helping bring the story to kitefoil fans around the world. “It’s good to be here event if I can’t compete,” said the World Champion. “But today was a hard day for riders and for the organisers. A big weather system came over and when the wind rotated 90 degrees left and then died, that was the end of any possibilities of racing.

“I’m looking forward to watching everyone on the race track tomorrow. It will be hard for me to watch from the sidelines but I think I’ll still be learning. It’s really tight between the top three in the competition, and I’m really impressed with how Max [Maeder] sailed yesterday, winning three races. The standard is going up all the time, it’s exciting to be part of this scene where the level is improving so quickly.”

In the men’s division Maeder from Singapore leads Connor Bainbridge (GBR) and Mazella (FRA). In the women’s division, Poema Newland leads the way for France ahead of Great Britain’s Ellie Aldridge and Spain’s Gisela Pulido.

Tune in for the start of the live stream at 1100 hours local time, with Facebook Livestream commentary from Theo de Ramecourt and Andy Rice, and first race start sequence at 1130 hours.