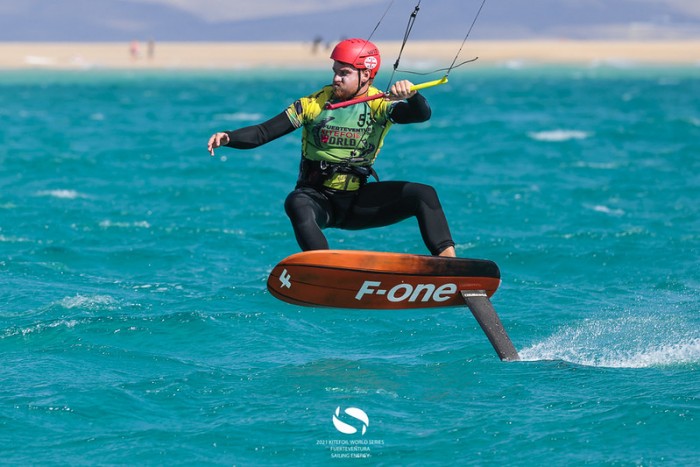 The contest takes place from 1 to 4 December and, while most of Europe is suffering in the depths of a chilly winter, the Canary Islands continue to enjoy Saharan levels of sunshine and healthy amount of wind. All perfect ingredients for the high-speed foil racers to show off their precision skills and physical courage to the world. There are 24 competitors from 14 countries and three continents.

A new Olympic event for the next Games in Paris 2024, attention on this extreme form of wind-powered competition is at an all-time high. While a number of Olympic aspirants are here in Gran Canaria, the difference in the KiteFoil World Series is that equipment choices are much less limited. This is an opportunity for the riders to bring their best and most advanced weapons to the fight.

In the overall standings Axel Mazella is looking well placed to win a third Series title to go with the two he won in 2017 and 2019. Behind the Frenchman is a close battle of the beards, between the Russian Federation’s Denis Taradin and Connor Bainbridge. In the women’s division, Poema Newland leads her French team mate Lauriane Nolot. Newland continued to prove her winning ways last week at the fourth event of the season in Fuerteventura. She’ll be hard to beat for the women’s crown in 2021.

Missing from action last week but ready to join in the fray this week are two friends, Australia’s Torvar Mirsky and Jack McKendrick. Mirsky is a professional sailor while McKendrick is a professional airline pilot, competing at his first ever World Series event. “I’m really looking forward to racing against the best in the world, doing what I love doing,” said McKendrick, who takes a few months out each northern hemisphere winter to train and teach kiteboarding to others in Antigua in the Caribbean. Now he’s keen to put his part-time skills to practice in the most competitive professional environment in kitefoiling. “I’ve got a lot to learn about racing and this is the best way to do it,” he said.

Mirsky’s day job is racing Dragon keelboats for a living. He’s maybe best known in the sailing world for winning two World Match Racing Tours in keelboats and catamarans. He took a few years out from sailing when studying for a degree in mechanical engineering. That’s when the Australian first caught the kitefoiling bug. “A lot of my friends go Moth racing for their fun, which is great. But they’re maybe doing nine hours of boat work for every hour of racing. Kitefoiling is my version of Moth racing, where you put the kite and the foil together in a few minutes, and off you go.”

While Mirsky has no serious designs on an Olympic campaign, he can see the upward effect it’s having on the quality of competition. “Anyone who doesn’t think this is sailing needs to take a closer look. It’s got all the same ingredients, and all of them matter - starting, tactics, strategy, speed - you need all of them to succeed here just like you do in normal sailing.” Mirsky was only a year back from his sailing sabbatical when he won the second of his match racing world titles in 2017. “I couldn’t have done that without staying sharp with the kitefoiling I’d been doing,” said Mirsky.

The event is sponsored by the Department of Sports and the Tourist Board of the Cabildo de Gran Canaria, with the collaboration of the San Bartolomé de Tirajana City Council. Francisco Castellano, Sports Councilor for the Cabildo de Gran Canaria, commented: “From the Sports and Tourism departments we are very aware of the importance of supporting these international competitions on the island. Thanks to these championships Gran Canaria is spoken about all over the world, not only as a destination to spend holidays, but also to come for training, even for the Olympic Games, now that the kitefoil will be in Paris 2024. It is an honour to be able to welcome all these riders back to the island, these riders who we will probably see compete in Paris.”

Competition begins on Wednesday 1 December at 1300 hours local time. All the action on the climactic final two days of regatta on Friday and Saturday will be featured on Facebook Livestream.