A couple years ago I wrote a short account of most days here for a month or so and some folk seemed to appreciate it, so since I am here for two months again this summer, Omicron be damned, I will do it again. If you are not interested in the ramblings of a 65-year-old mediocre kiter, please just ignore this thread.

Today was my second in Cape Town (yesterday was SW wind and perfect for recovering from the travel - 30 hours and three flights from East-central Illinois) and getting my car running after standing for 21 months, plus renewing the license (2.5 hours in a line for a transaction that took all of three minutes), sorting out bank issues, getting my phone working, etc. The forecast was for SW early and SE late, so I joined my sister on a regular Wednesday walk with a group of a dozen older folk that my Mom used to walk with. Lovely 6-mile hike around the south side of Silvermine reserve with amazing flowers, lots of birds including a malachite sunbird and a group of four ground woodpeckers, and all the crazy sandstone formations of Table Mountain. The SEaster started around 3PM, and I joined my local friend David at Dolphin Beach. It was already blowing pretty hard so we pumped up 9m kites, mine a 2018 Pivot, of course as that's pretty much all I have these days, and had a good session. It's always an adjustment for me coming here, and takes a session or two to get used to the conditions again. It is far more intense than other places I kite. After about an hour I was fully trimmed down, so took a break and pumped up my 2016 7m Pivot. As I was rigging my lines I noticed a guy hopping around on one leg, having somehow landed his kite. He was holding his left knee, so I checked on him and he had smashed it awkwardly on a wave. I packed up his gear and carried it out, then came back with another kiter to get him. With his arms around our shoulders he could hop on his good leg to his car, and said his girlfriend was out kiting and would look after him from there. Sorry to say I think his vacation is over. Anyway, headed back out and did a short downwinder to Doodles restaurant. By the end I had the 7m trimmed down too, graph from BKA shop below suggests gusts to 30 knots. It was almost as busy along Bloubergstrand as back in 2019/2020 summer. Along the way I stopped to watch Lasse Walker, Graham Howe, and several other hotshots putting on a show. Inspired I did some bigger, for me, jumps and recorded an 8m one on my Surfr app on an old iPhone. Just 2m to go to my goal of 10m, at which point I will have to learn heliloops for landings, something my friend David mastered during covid and can now do 12-13m jumps reliably with smooth landings. I'm very nervous about trying them though, I really can't afford bad crashes at my age. Only problem then was that when I tried to get on the bus to ride back upwind, the driver kicked me off as I had forgotten I needed a mask. I begged one from a guy sitting in his car nearby and made it back to mine. All in all a great first day of activities in Cape Town, and tomorrow looks stronger.

Today played out as forecast, pic below. We chose to go early to get more manageable conditions. I wanted to try strapless surfboard to get my legs at that again, so went on 7m, while David and his friends mostly went on 9m and TT. We rode at Dolphin beach for a while, then I got tired of fighting upwind just for one or two turns on a wave coming in, so David and I took off on a downwinder to Holbaai, just beyond Haakgat. It was splendid, I just love riding a wave and then as I go back out simply pick the next wave and ride it in, no straining upwind. My thighs burnt like skiing in deep powder. I prefer regular stance, so I ride toeside on the waves. It was great to get that feeling again, and the wind was consistent from 1 PM to when we stopped around 2:30. David was jumping big and landing softly. Along the way I saw a pair of Great Crested Grebes, which is very unusual at sea, they are usually in freshwater, plus three seals. It was such a gorgeous day, sunny with crystal blue water, white sand beaches, and the tablecoth of clouds on Table Mountain as backdrop. It simply doesn't get much better.

Back at Dolphin beach around 4PM I tried riding TT, but I was perhaps too tired, I just could not get my jumps to work and the gusts were bad. I had my 7m half trimmed down. None of that bothered the hotshots though, and Janek (who does not need a surname) was putting on a show on his 10m Core XR7, simply amazing that someone lighter than me could hold down that kite, let alone throw the jumps he does complete with all the rolls and spins, and almost every one smoothly landed. There were several other hotshots I don't know out there, some throwing megaloops, but then the king arrived and Ruben put on his own show. I could no longer stand the wind, sand, and sun around 5:30 PM. Another excellent day and I'm really glad we went early. Forecast for tomorrow looks like more of the same.

The strangeness of the day was two instructors and two students from a kiteschool called High Five. They sent the students out into the strong conditions mid-afternoon on 8m kites with somewhat short lines. These students must have had several lessons as they had the basics of handling the kite, but they then proceeded to body drag far out and despite having boards with them, did not appear to attempt to ride them, at least while still in view. The two instructors rode along near them, and they slowly went downwind, at least to Kite Beach. The water was seriously cold today and they must have been frozen stiff. Seemed like a really hard way to learn kiting. 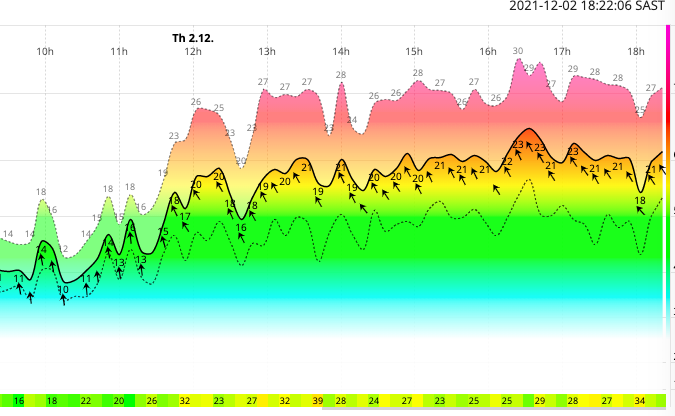 sorry for OT, but can anyone explain waht are the green/yellow numbers at the very bottom of the windguru chart?

Great day out there today Hugh, I was at the South KB car park spot from 3.30pm to after 7. Work day, kite testing and tuning. Looks good right thru weekend too...
Top


Brand Affiliation: None
Has thanked: 318 times
Been thanked: 467 times

Only for the hotshots and really big guys. There were guys on directionals riding 4m. I probably should have taken my 5.5m Nomad and would have been more comfortable, but I don't like jumping on that.
Top

Was in CT a few weeks ago for KOTA and the windy days before and after, and did everything you mentioned in these posts - already feel like booking a ticket to go back lol. Janek is indeed a different type of beast to watch indeed, pure wizardry to see him live. Keeping an eye open for another trip in January or February, but in the meantime, keep the reports coming!
Top

balticswell, I'm not actually sure, I thought temperature but it doesn't make much sense, perhaps someone here knows. This is a Windguru report for the wind meter maintained by the BKA shop at Bloubergstrand.

Thanks tsachuk and Strekke and those that thanked. I'll try to keep it going, although tonight I am exhausted.

Forecast was for another strong SE day, so again we started early. In fact I think I was third kite out at Dolphin Beach at around 1:30 just after it filled in, amazing to have that beach almost to oneself. There was almost no swell, and the wind-generated cross chop had not developed much yet, so I went out on 9m and managed to get some decent jumps in, tops this time at 8.4m. Clearly still some work to do for 10m, but that might come when we get some decent waves with long period providing long smooth stretches to gain speed before launching. Today despite the relative lack of chop, I still could not get full speed for jumping while staying in control. Around 2:30 David and a gang of his friends rocked up, having staged his small van at Eerstesteen, the little Nature reserve downwind or north of Big Bay (too many of us to trust my bus cards to work for everyone). By then I was already a little shot and the wind was building, so I went down to 7m, which was the right choice for me. It's always an adjustment changing kite sizes and the faster speed of the 7m requires different timing for the landings, but I got there eventually. My Surfr app did not seem to record all jumps however, only about 50 and on that long run I must have made over 100, often three jumps on each run out till my arms ached. As usual I had a blast doing the section outside around to Big Bay, pointing my board straight downwind and alternately using slight heelside and then toeside edges in a weaving S to keep tension in the lines with the kite at full trim, catching and surfing down the swells that were bigger out there for some reason. Still no dolphins to accompany me though. Big Bay was strangely useless, I don't know why folk ride there, some of them even gave me the evil eye as I blasted through, it was gusty and difficult cross chop with almost no waves coming in. But as usual the section just north made up for it, with typical crescent-shaped waves, albeit small, which I could slide through on toeside as if on a surfboard. And heading back out the small sharp waves made for great kickers, as long as you don't mind landing in relatively shallow water. But Eerstesteen came up rather quickly and our fun was over. David and most of his friends are better jumpers and landers than me, but we all had a great time, with, I believe, a couple of them never having done that last section. Seven of us in David's little van was rather packed, should have taken a pic, and we got back around 5. I don't think anyone was up for another session, and I still hurt quite a lot this evening. The graph shows it got pretty intense after that at Kite Beach, so good decision to go home and enjoy a shower and dinner and a nap. Sleep will come easy, although the windows in our 10th floor flat in Milnerton will be rattled by gusts long into the night. And we saw two molamolas today, always great to see these bizarre fish on a lovely, sunny, warm day with crystal clear water. It clouded over by the end of the day, but that only gave us a brilliant sunset as the sun peaked out by Lions' head just in time. Tomorrow looks mixed, the forecast for Cape Point, Platboom Beach, and Misty CLiffs/Witsands looks insane (30-40 knots), so we don't want to go there, and kitebeach looks mixed, so we may go to Witsand at the Breede River mouth instead for a change of scenery with a straight Easterly forecast. Sunday might be rainy.

Users browsing this forum: No registered users and 55 guests