Taradin running out of runway to beat Bainbridge 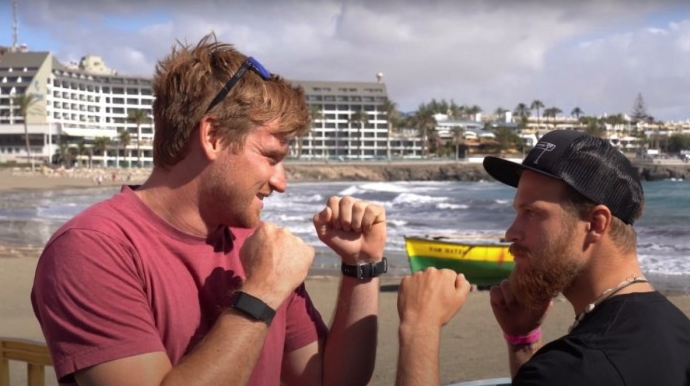 
Day three of the 2021 KiteFoil World Series Gran Canaria saw the breeze gusting too strongly for the riders to get out through the shore break at Playa de las Burras. Again no racing, but few murmurs of disappointment from the fleet.

Someone who was desperate to get out there was Denis Taradin. The Russian Federation rider needs some races to mount his fight-back for second place in this event as well as in the overall World Series.

In a who-beats-who scenario, it’s the British rider Connor Bainbridge that holds the upper hand in the Battle of the Beards. Taradin’s beard may be longer, but the timeline for overtaking his British rival is getting shorter. The forecast for the final day’s competition looks blessedly lighter, and from a more favourable, steadier angle.

Having trained in Tarifa all summer, today’s tough conditions looked like a typical day out for Taradin. “I have been kiting there every day for six months, and I only used my 19 square metre kite three times,” he said. The ’19’ only comes out in light winds, and the kiteboarding and windsurfing Mecca in the south-western corner of Spain rarely serves up soft conditions. He has been battle hardened to the worst of the weather. “Today I would be ready to race in these conditions, but there is the whole fleet to think about.”

Bainbridge, also more comfortable than most in high-wind conditions, was good with the decision. “Things can go wrong really quickly in wind this gusty and waves this big,” said the Briton. “Today was on the margin, and it was the right call.”

France holds the upper hand in both the men’s and women’s divisions, with Axel Mazella winning four of the five races completed so far in Gran Canaria. Top woman is Poema Newland who has got better and better throughout the season. Winner of a silver medal at the Youth Olympic Games in 2018 on a twin-tip kiteboard, Newland was persuaded to switch to kitefoiling and aim for the Paris Olympic Games in 2024.

“At first I was not really motivated. When my coach called me and said, ‘There is going to be kitefoiling for Paris, do you want to go for this adventure?’ I said ‘Why not?’ But I was not committing myself fully to it. Then 2020 came along, and it was a hard year, with Covid and a difficult situation. It gave me to really think about what I wanted. And yes, since January of 2021, I became really motivated and I'm really putting everything of my life into this goal. That's why maybe I did a big jump with my performance this year.”

Like Mazella in the men’s fleet, Newman is on the verge of winning the 2021 Kitefoil World Series, which would be the perfect way to finish off a year of great progress.

Six races are planned for 1200 hours on Saturday. All the action will be featured on Facebook Livestream from 1130 hours.