Trent hink wrote: ↑
Tue Jun 07, 2022 11:04 pm
On low end riding, I always loop the kite to start, but it takes a bit of touch to figure out how hard you can sheet in on the kite without choking it off.

Igree with that, you must loop several times until you feel where is the máx pull.
You can have and idea here:


At that point a moderate volume board (small wingboard) makes my foiling easier, so at the first stroke I am up on the board... So it wont sinks.... Waiting for a gust
And then I loop the kite until the Foil lifts.

Brand Affiliation: None
Has thanked: 14 times
Been thanked: 19 times

Wow, thanks for that video. Sketchy session. Amazing relaunch skills. I will work on my looping water start technic.

Looping for water start is the solution! Worked like a charm yesterday. Not by all means an epic session, but it forced me to practice the loop water start. I was out between 4-5:30pm and wind was 8-13mph. See the attached wind chart. 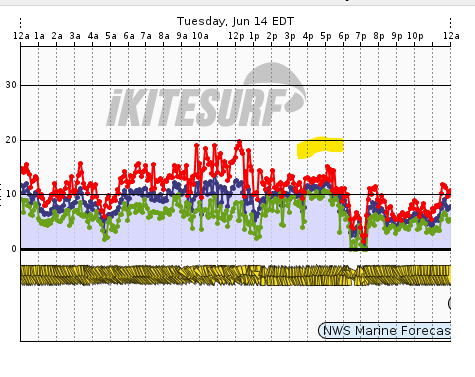 I'm so impressed with my 6m Peak 5 for foiling!

Crashed it several times trying to learn tacks. Several times in higher winds on 12m lines, it kind of "bounced" off the water and relaunched. I'm planning on adding a 2.5 and 4 to my quiver next.

drsurf wrote: ↑
Thu Jun 02, 2022 2:44 pm
The Connect 2 bar isn't much different to the previous Connect bar. Some small improvements but the previous bar is fine.

However if you are buying a previous model bar don't go too far back in time. The very first version of the Connect bar was never designed with foiling use in mind and didn't have enough volume in the floats to stop it sinking

I'm updating this as I now have both bars. The connect 2 bar has a different material safety line, nicer and blue. It also has a little ring splitter near the Y so that using it as a front line safety only pulls one front line. This is a nice setup if you're flying it without the B-safe line.
It's also easier to remove extension lines now. Mine came with 3m extension lines but I think that's not standard. The top had extra pigtails that are kind of thick and bulky so I'll probably remove those.
The b-safe line from the Y to the kite is also blue and stiffer now and has a ring connection like the other lines.
Overall a better design, and I will update my old bars to the same kind of system.

Regarding the Peak5 Vs Peak4, still not finding a huge difference to be honest. Although it does turn a tiny bit faster and relaunch from water seems easier. The bar feeling when overpowered feels a little bit nicer, but functionally I kind of think it's the same wind range.


Flyboy wrote: ↑
Thu Jun 30, 2022 12:37 am
On the suggestion of JTS I made some shorter line lengths to use with my Peaks: 14m & 17m, to go with my standard 20m lines. What you lose is some of the ability to move the kite to easily generate extra apparent wind ie. extra power when you want it. What you gain is a more reactive kite and more feel in the bar. A shorter sweep through the power zone also allows you to turn without generating unwanted extra apparent wind.

In my experience, shorter lines are great when you are nicely powered & wave riding, not so great if you are riding a little underpowered & in flat water. The kite feels more "lively" in the first situation, a bit "dead" in the latter situation. The relationship between kite size, line length & how powered you are, is a fluid one. The optimal set up may vary depending what the wind does during a session.

I don't feel short lines are a really effective way of extending the range - it does help with control somewhat, but I'd rather be on a smaller kite. It's true that it's possible to ride a foil pretty overpowered - you just point high &/or keep the kite high & sheeted out. Short lines help in that situation - it's not much fun however.

ieism wrote: ↑
Thu Jun 30, 2022 7:16 am
I shortened a lineset thinking I would use it with the smaller peaks, but ended up using it on the 11m only. It gives me better upwind (the 11 is not so good upwind). And it also makes a dull feeling kite a bit more like the smaller sizes. I don't feel it made the low end much less because this kite is so slow that sending it trough the powerzone takes an eternity anyway and by that time I'm up and riding.
I hate the 5 and 4m on short lines, too much work for me.

As a result my ranges are quite different and I rig down later than most Peak riders.

Like anything (especially with small peaks) it takes getting used to. Many have initially complained about how sensitive small peeks are to sheeting and when used to a longer effective sheeting range the small peaks can feel awful until you spend enough time with them to adapt. Short lines is no different. The gains are less flutter, quicker kite positioning, less space required to launch or land, less power spike while unhooked and more consistent relaunch and swimming reset/launch. The downside is loss of low end power generation by working the kite.

As a result my personal preference is to be well into a smaller kites range when I rig down. I don’t particularly like being underpowered and use the kite to soften landings. When it comes to actively flying the kite through cutbacks and bottom turns I have a hard time waiting for kites in longer lines. The bigger the conditions the more so that is the case hence the ever shorter lines on smaller kites. As to drift, I find no real difference. In big winds Peaks drift! I respect that everyone has a different style and that line length is a fairly impactful variable in how you express yourself in your riding.

In general I think my ranges on the Peaks are shifted up 2-3 knots for each size respectively and I am under 75kg.

Could be way off on some of these, but a guesstimate could look something like this 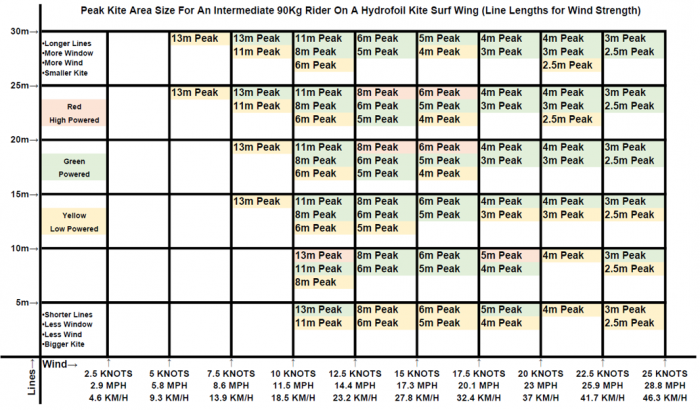 These users thanked the author PugetSoundKiter for the post:
bitxopalo (Fri Jul 01, 2022 1:49 pm)

Brand Affiliation: None
Has thanked: 97 times
Been thanked: 43 times

With 65 KG move everything one column left

These users thanked the author bitxopalo for the post:
PugetSoundKiter (Fri Jul 01, 2022 4:26 pm)

What is the preferred landing method with a single skin? Backstall? Fly to edge of wind window and land on leading edge? Wingtip landing?

What is the preferred landing method with a single skin? Backstall? Fly to edge of wind window and land on leading edge? Wingtip landing?


Backstall, or at the end of the day, just fly it sideways into the ground.

The 8 works in 8-10 knots so not windy anyways, but same methods works for the smallest ones too.

Some say they can be stake landed on their side, have never done that and doubt it would work with an 8 m2, but probably with the small ones

Just no need to use this method IMO, but if wind picks up a lot, it could work as the safest option maybe.

When crash landing the kite, I found that it doesn't take much for a bit of fabric to catch some wind and initiate a tumble or a twist. That's on a hard sand beach where you can mountainboard on. In long grass, or soft sand with bumps, there might be enough drag resistance to keep the fabric on the ground.
Of course If you're lucky to have the wind shelter of a small bush or someone's parked 15m kite nearby, then landing in that spot is the easiest way...

I found the best way for me to avoid tumbles on the ground, on an open, exposed flat beach with low resistance, is to put the kite on edge of window, disconnect all, and go towards the kite, in an upwind arc trajectory, while walking up BOTH lower lines. (if landing on the left, hold left steering and left flying lines).

That tends to work better than one line at keeping things clean in the bridles on the way to the wingtip.
There's only power in the kite when all lines are tensioned, so no risk in having the lines ripping through your hands.
Wouldn't work as well with high Y bar setups.