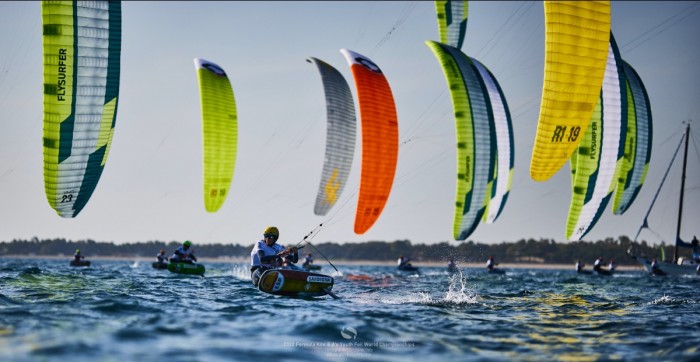 Day one of the Formula Kite U21 and Youth Foil World Championships in Sardinia delivered challenging and shifty wind between 9 to 13 knots, but still the favourites rose to the top of the scoreboard.

- Two breezes fighting each other for supremacy made the Gulf of Oristano on Sardinia’s west coast a tricky place to race, but 9 to 13 knot breezes late in the afternoon enabled all four scheduled races to take place
- Defending male champion Max Maeder from Singapore won all four of his opening heats in his half of the qualifying fleet in the Formula Kite division
- Italian rider Riccardo Pianosi picks up a UFD disqualification in his opening race, but follows up with three bullets on his side of the male Formula Kite draw
- Gal Zukerman of Israel leads the female Formula Kite fleet
- Jakub Balewicz leads the Polish charge in the mixed A’s Youth Foil fleet.

Julia Damasiewicz could have been leading overall after day one in beautiful Torregrande, except that the defending youth world champion from Poland sailed the wrong course while leading race three. “Other riders were told about the course change by their coaches,” she said. “But I didn’t manage to speak to my coach and I didn’t see the course change on the race committee boat. It was an annoying mistake, but I have to move on.”

Damasiewicz’s error opened the door for another Polish rider to take pole position in the female standings. Last year’s bronze medallist Nina Arcisz also slipped in race two with a 15th, but her other scores of 1,2,2 were sufficient to put Arcisz in front as the riders stepped ashore. However, a protest against the Pole led to her disqualification from race three, and this dropped her down to seventh overall.

So after protests were settled it's Gal Zukerman from Israel who holds the top spot. Zukerman didn’t realise until she came ashore quite what a good day she had sailed. “I hit a bag in one race, had a crash, and there was quite a bit of weed on the course, but I’m happy with how things have worked out at the end of the day,” she said. Damasiewicz is two points behind the lead with another Israeli, Maya Ashkenazi, in third overall.

British rider Francesca Maini’s day of competition is not yet over. Currently in the middle of exams, studying Geography at Exeter University in the south-west of England, Maini has to complete two critical essays in a 24-hour period. “I wrote one essay before we went on the water, then sailed the four races, and now I’ve got to write the other essay this evening,” she laughed. “I’m not sure I’ve got the energy for it! I’ve got the energy for going kiting, but not exams.”

As expected, the defending Formula Kite Youth World Champion, Max Maeder from Singapore, is going to be hard to beat in Torregrande, although he was typically humble about his perfect scoreline today. “I was a little bit fortunate with the two sides of the qualifying draw,” said the 15-year-old who scored four wins from four. “Most of the other experienced riders were racing in the other fleet, so that made it a bit easier for me. I was really impressed by Riccardo [Pianosi] in the other fleet. He showed he could come back through the fleet even when he was behind, and that is a great skill to have.”

Pianosi was mostly happy with this day, winning his last three races but kicking himself for the UFD disqualification in the opening heat after crossing the start line too soon. At a previous regatta when he picked up two over-eager UFDs in a single day, his coach made him shave ‘UFD’ in his hair. Pianosi was relieved to avoid that embarrassment today and will most likely pose the biggest threat to Maeder in the boys’ division if he can stay the right side of the start line. The only other rider to win a race today in the male division was China’s fast-improving Qibin Huang who shows real potential to challenge his opponents at the top of the leaderboard.

Poland holds three of the top four places after the first day of racing in The A’s, the lower-powered foiling kiteboard option for the under-17 riders. Jakub Balewicz’s consistency rewards the Pole with first place overall after four races, two points ahead of Switzerland’s Gian Andrea Stragiotti. The two Poles in third and fourth are respectively defending A’s world champion Jan Koszowski followed by Marcel Stepniewski.

Racing continues on Thursday with four more races scheduled in the Male and Formula Kite divisions and the Youth Foil mixed fleet.