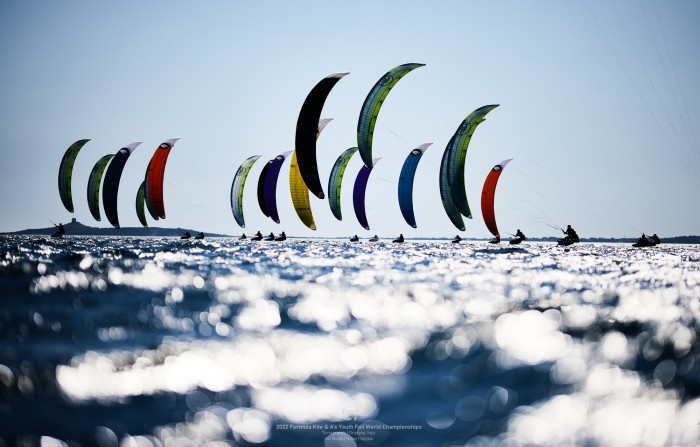 Day two of the Kiteboarding Youth World Championships saw a change of leader in two of the three divisions. The breeze was steadier than Wednesday, with all four races completed in winds of 8 to 16 knots which gradually moved around from the south-west to north-west throughout the afternoon.

Four bullets for Gian Andrea Stragiotti of Switzerland in the Youth Foil U17 fleet
A change of leaders in the female Formula Kite fleet after a big crash took out Gal Zukerman. Now it's Israel’s Maya Ashkenazi turn to hold first place, just one point ahead of defending world champion Julia Damasiewicz from Poland
Max Maeder from Singapore has eight wins from eight races at the end of qualifying in the boys’ Formula Kite division
Italian rider Riccardo Pianosi wins three from four races on his side of the Formula Kite qualifying competition

Gian Andrea Stragiotti enjoyed the slightly stronger breeze to move into the lead after a dominant day. The Swiss rider scored bullets in all four races. “I don’t think I’ve ever had such a good day as today,” Stragiotti smiled. “I’m one of the heavier riders in the fleet, about 68kg, so we could use our weight in the stronger conditions. The starts were good, the speed, and picking the laylines on the race course, everything went well today.”

Jan Koszowski may not have been able to match Stragiotti’s stratospheric speed but the defending world champion from Poland still sailed a very good day to record a string of second places which raises him to second overall. Leader after day one, Jakub Balewicz from Poland, slips to third overall with Enzo Louber from France looking to close the gap. “My results were better today,” said Louber, “but I think I can do better. I need to do better because I really want to get into the top three.” Top female rider in the Youth Foil fleet is Poland’s Karolina Jankowska.

A big crash in the second race of the day shook up the leaderboard in the girls' Formula Kite division. Two kites colliding led to one of the kites to collapse to the water, resulting in a three-way pile-up. Gal Zukerman (ISR) ended up swimming and while trying to recover the situation her foil got tangled with the lines of Magdalena Woyciechowska's (POL) kite. This ended up breaking the tip of Zukerman's foil which ended up affecting her speed in the subsequent races.

Zukerman kept on racing but relinquished her lead to her Israeli teammate, Maya Ashkenazi. The battle for the top of the women’s Formula Kite leaderboard is now very close, with Israel and Poland both well represented at the sharp end of the competition. Just a point behind Ashkenazi is the defending world champion Julia Damasiewicz whose scores improved throughout the day, finishing with a race win late in the afternoon. Zukerman falls to third overall, a single point ahead of Woyciechowska.

It was a difficult day for kite selection, as 8th placed French rider Lysa Caval explained after racing. “I was on the 19 [square-metre kite] all day, and it was perfect for the first two races. But when the breeze picked up a bit more for the last two races I was doing my best to hold on, put more power through my legs. But some of the other girls on 15s were going faster. It’s a hard choice sometimes.”

So far the two frontrunners in the boys’ Formula Kite fleet have been racing on opposite sides of the draw. Apart from a 4th place in the second race of the day, Riccardo Pianosi dominated the blue group, the 16-year-old Italian winning the other three heats. Meanwhile in yellow group 15-year-old Max Maeder reigned supreme once again, the Singaporean having won all eight of his heats in the competition so far.

On Friday the boy’s fleet is regrouped into gold and silver fleets, and at last Maeder and Pianosi will go up against each other. The Italian has been working hard over the past year to try to match and even overhaul the Singaporean who won last year’s youth worlds. Now comes his opportunity to take on Maeder on Italian waters. Just as on day one, the only other rider to take a race win was China’s Qibin Huang who holds third place overall, three points in front of Vojtech Koska from the Czech Republic.

Max Maeder’s younger brother, Karl, is also looking to make moves up the fleet in his bid to represent Switzerland at the Olympics in Paris 2024. Aged just 13, Karl thinks and speaks beyond his years. He was struggling to take the positives from a day where he felt he had only made mistakes. “I broke my front wing in a crash with Sam [Dickinson, GBR] in between races. It was upwind-downwind and it was my mistake but I couldn’t avoid Sam and we both had damage. I need to start getting rid of those kind of big mistakes.”

Keeping a clear head whilst trying to maintain control of a small board riding a metre above the sea at speeds over 30 knots, sometimes close to 40, this is technically the toughest of all the Olympic disciplines. It demands the reflexes and response time of a fighter pilot, as well as nerves of steel. Small wonder that kiteboarders mature so quickly.

Racing continues on Friday but with an 1100 hours start time to take advantage of a south-easterly breeze forecast to arrive earlier in the morning. If all goes to plan it will be another four races for each of the three divisions, and the first day of gold and silver fleet racing for the boys in the Formula Kite.

Re: Switzerland surges into lead of Kiteboarding Youth Worlds Day 2

Quite all on Sab Moses foils as i see. Interesting that of wings they using?
Top

Re: Switzerland surges into lead of Kiteboarding Youth Worlds Day 2

that is the one design youth class with freeride moses/sabfoil and 13-9-6m Ozone edge v10: