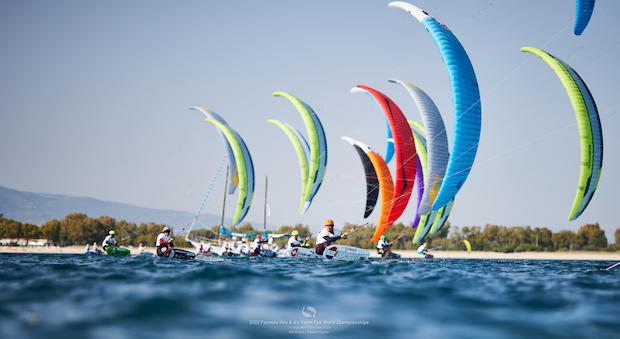 
Day four of the Kitefoiling Youth World Championships saw the three divisions competing in 8 to 12 knot winds and another four hard-fought races completed. There were some significant moves on the leaderboard too.

Three wins from four for Max Maeder of Singapore in the boys’ Formula Kite
A breathtaking port-tack flyer makes France's Arthur Lhez the daredevil of the day
Best performance of the day in the girls’ fleet sees France's Heloise Pegourie climb from 4th to 2nd overall
Four back-to-back bullets for Gian Andrea Stragiotti in the Youth Foil U17 class.

The second race of the day in the boys’ Formula Kite was the best. A tight duel all the way around the race course between Max Maeder (SGP) and Riccardo Pianosi (ITA) was never decided until the final 10 seconds before the finish. Nearly every manoeuvre on the race course was a simo-tack or simo-gybe between these closely matched athletes. The two rivals had been pretty much neck and neck up the final beat towards the top of the course until a rare slip by the Singaporean saw Maeder’s board momentarily crash into the water. It was sufficient to give a bit of breathing room to Pianosi who held the lead until the finish.

A vital psychological boost for Pianosi, but unfortunately for him and the rest of the 21-rider Gold Fleet that was the only time Maeder faltered. His ability to pull the trigger just a fraction of a second sooner than most of this rivals gives the 15-year-old a critical advantage that often enables him to tack and cross a minute after the start. Once he’s in front, it’s rare for anyone to get the better of Maeder.

Best start of the day was executed by Arthur Lhez when the fearless Frenchman swung his red kite down across the front of all 20 of his rivals on starboard tack, pulling off a perfect port tack flyer and surging into the lead. While Lhez couldn’t hold on to his lead for the rest of the race, it was a great moment to witness for anyone watching the live internet stream of today’s competition. Lhez’s string of four fourth places puts him in fourth overall, just ahead of Vojtech Koska of the Czech Republic.

Being third overall, China’s Qibin Huang is top qualifier into Sunday’s Semi-Finals which will decide who of the eight riders from 3rd to 10th overall will progress to the four-rider Final. As the two top-placed riders, Maeder and Pianosi, have already earned their spots in the Final.

Maeder acknowledges the pros and cons of automatic entry to the Final. “Some might say it’s a disadvantage because we don’t get to experience the conditions and the race course from the Semi-Finals,” he said. “But I see it another way, which is we can watch the Semis play out without the pressure of having to perform. I think it gives me and Riccardo the opportunity to watch and analyse the course from outside, and maybe think about the options in a little more detail. Anyway, bring it on! I can’t wait to race it out in the Final.”

As Heloise Pegourie (FRA) stepped ashore after a phenomenal day of racing, her mother was in floods of tears on the Torregrande beach. Tears of pride and joy. Pegourie couldn’t quite believe what a step-up in performance she made this afternoon. A 3rd in the first race, followed by two races wins and rounding off the day with a 2nd, the French rider was the most consistent of the day. “That was a day like I could never have dreamed of,” she said with emotion and a smile as wide as Torregrande beach. “I’m so excited, my mum and dad are excited for me. I thought maybe I could climb to third today, but to get up to second, win a place in the Final, that’s beyond my dreams.”

So Pegourie joins Israel’s Maya Ashkenazi as the two riders who earn a clear run through to the four-rider Final. Ashkenazi won the opening race of the session today but had a strange slip of form for the rest of the afternoon, as did the other top Israeli rider, Gal Zukerman. Second in the first race would prove to be Zukerman’s best result of the day and by slipping to third overall she will have to fight for her right to get into the Final via the Semi-Finals.

The beauty (and the beast) of the Medal Series format is that any of the top 10 riders in a division go into the final day knowing they have a serious chance of winning the world title. In addition to Pegourie, two other riders who put in a confidence-boosting performance today were Nina Arcisz of Poland and Sofia Tomasoni of Italy. Arcisz’s race victory at the end of today’s session will give her good reason to dream of a podium finish on Sunday.

The pendulum swung firmly back in Switzerland’s favour today, as four back-to-back bullets for Gian Andrea Stragiotti saw him stretch is advantage in the Youth Foil U17 class. Defending champion Jan Koszowski (POL) retains second overall, sufficient to put him directly through to the Final alongside Stragiotti. Third and fourth places respectively for Jakub Balewicz from Poland and Enzo Louber from France gives them a head start in their battle to break out of the Semi-Finals and claim the two remaining spots in the Final.

Racing continues on Saturday at 1300 hours local time in Sardinia, with the live broadcast starting at 1240 hours. This Semi-Finals and Final format means nothing is certain until the last race is done.