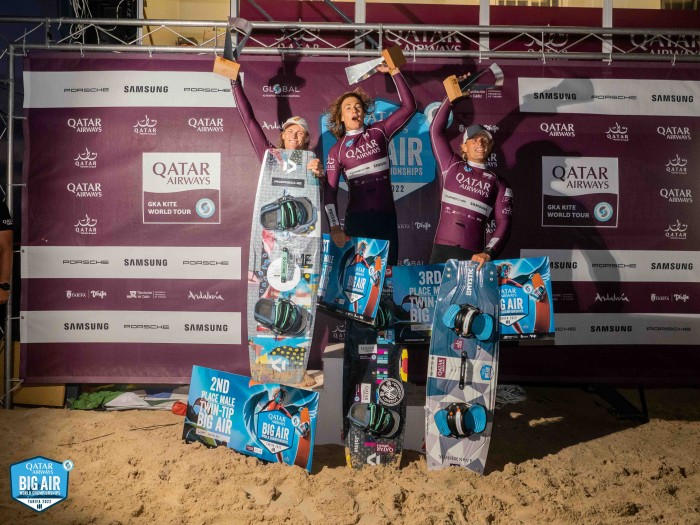 A big day in kiteboarding history!
In yesterday's finals of the men's Twin-Tip Big Air discipline, Andrea Principi made history by scoring a whopping 10 points in his final trick of the heat on a double boogie loop! This jaw-dropping manoeuvre was enough for him to take the lead over Liam Whaley and claim the Qatar Airways GKA Big Air Men's Twin-Tip World Championship title.

Yesterday morning, riders were greeted with light Levante winds and a scorching hot Balneario beach. The wind so far has been far from a typical Tarifan forecast with a strangely absent summer Levante wind. Nevertheless, we finally had a window open up to run the competition on Friday afternoon with strong Levante wind that continued to blow all night and is still cranking hard this morning.

The wind came pumping through the straits of Gibraltar just after riders had finished their lunch. The women's strapless big air riders were the first to take to the water and throw down some spectacular moves.

In the women's strapless big air finals, we saw Capucine Delannoy and Tarifian local Camille Losserand go head to head on the water. Both women were matching each other move for move with Camille pulling off some impressively high rodeo front rolls and back rolls. Nevertheless, it was Capucine who came out victorious with a huge kiteloop right on the buzzer. 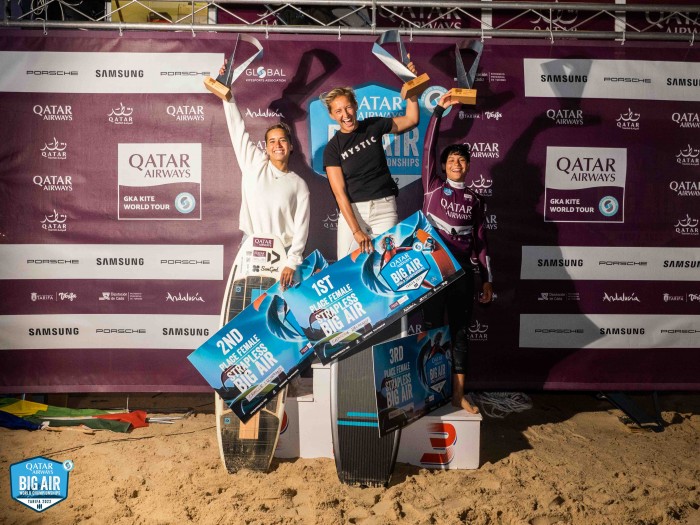 The Levante wind continued to build as the men took to the water. BAKL Cape Town winner Lorenzo Casati proved hard to keep his eyes off in the first rounds of competition as he was spinning like there was no tomorrow, throwing some insane quadruple front roll boogie loops. The Italian stallion made it all the way through to the semi finals, where he faced the Tarifian Legend, Liam Whaley.

There is arguably no other rider with better knowledge of Balneario than Liam. This man grew up in these conditions and calls Balneario his backyard. Lorenzo gave it everything he had against Liam but he could not defeat the local legend, allowing Liam to advance straight to the final.

Semi-Final number two was a mini-final in itself as we had the Current BAKL Tarifa Full Power winner Giel Vlugt up against the one and only Andrea Principi. At the start, both riders were matching each other, sending huge double loops, back roll double loops, boogie double loops and, finally, board-off boogie loops. Unfortunately, on Giel's last trick attempt, he had one of the hardest crashes of the day, coming down like a rocket. Giel gave it everything, but it was not enough to stop the unbeatable Andrea Principi.

The Grand Finale
The final of the men's Twin-Tip was an unforgettable moment in kitesurfing history. These men battled it out right to the very last moments, both riders had been neck and neck throughout the heat. In the final minutes of the heat, Andrea made a quick kite change and went straight out to land one of the most monumental manoeuvres of the competition so far. His signature boogie double loop had the whole crowd holding their breath as his kite looked like it wasn't going to catch him. Somehow the Italian managed to ride out of this one and score a whopping 10 points.

Andrea Principi on landing the highest scoring trick of the day;

"This was the most extreme move of the day for me. I saw my kite below me and I thought for sure my kite was not going to catch me. Somehow I managed to make it out alive."

Women's Twin-Tip Round One

In the final heats of the day, just as the sun was setting, we managed to complete round one of the women's big air twin-tip.

Nathalie Lambrecht put on a spectacular performance, landing an extreme backloop megaloop scoring a 9.3 which secured her win in round one of the women's big air.

Another standout rider from the first round was Angely Bouillot. Angely was going twice as high as her competitors and landing some insanely technical tricks. She managed to land the highest score of the day in the women's with a 9.67 for a double back roll megaloop.

Click here to go straight to the men twintip final:

His signature boogie double loop had the whole crowd holding their breath as his kite looked like it wasn't going to catch him. Somehow the Italian managed to ride out of this one and score a whopping 10 points.

unfortunately the 10.0 trick got missed by the main cam...hoping some other cam got it and we will see it later.


Brand Affiliation: None
Has thanked: 76 times
Been thanked: 74 times

That was a great watch. Good commentary as well. Happy to see Red Bull has some competition, because this was a very simple easy watch on YouTube and not the complex Redbull TV nonsense.

I think next KOTA will be a generation change...Liam only one with chances against the new generation.
Top