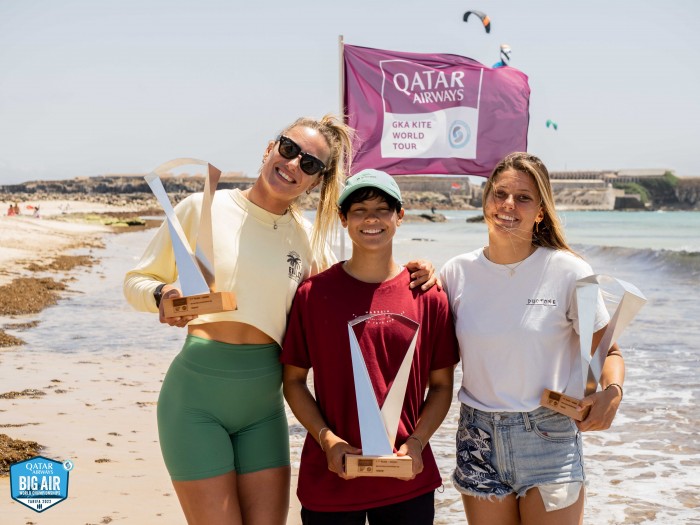 Saturday saw another intense day of action with Mika taking the win in the women's twin-tip big air and Airton coming out victorious in the men's strapless big air.

A bright and early start for riders saw the first women’s twin-tip heat kick off around 8am. We had lighter winds than the previous day, but conditions were still looking optimal for big air.

We flew straight into round two of the women's, with Hannah Whiteley and Nathalie Lambrecht putting on incredible performances. The women were making this heat look like a final, both performing some extreme megaloops and boogie loops.

In the last few minutes of the heat Hannah managed to pull off a magnificent frontroll contra loop. But, it was Nathalie from Sweden who claimed the victory in the final minute, landing a clean, powerful double backroll megaloop that left everyone speechless.

We had an exciting women's final on our hands with current BAKL Full Power Tarifa champion Zara Hoogenraad vs multiple disciplinary world champion and newly crowned GKA Rider of the Year, Mikaili Sol.

Zara answered back with a textbook boogie loop, which she landed consistently throughout her heats.

However, this only seemed to spur Mika on even more as she went on to pull off another doobie loop. Mika emerged victorious in this heat, showing us that she is undoubtedly the most diverse female rider kiteboarding has ever seen. After only training big air a few days before this event, it was incredible to see Mika take the win in the big air discipline, throwing down moves that her other opponents had trained months for.

The wind began to drop a little towards the beginning of the men's rounds one and two, and it was borderline as to whether the competition would continue.

Nevertheless, these experienced strapless riders managed to make things happen in the 20-knot winds, and boy did they put on a show for us!

One rider who surprised everyone during the men's strapless competition was rookie on tour Gabriel Benetton. In round three, Gabriel managed to take out the favorite for this event, James Carew. James appeared to be struggling in the lighter winds and couldn't seem to get into his flow.

On the other hand, Benetton had the heat of his life putting together some spectacular maneuvers such as a contraloop, front roll megaloop and back roll megaloop. He took home the highest score of the day with 25 points in the semi-finals against Camille Delannoy. His win against Delannoy secured him his first ever final on the GKA World Tour.

"This is my first ever GKA event, and I am over the moon to place second. I did not expect this going into this event and yet, here I am, in the final!”

Airton had been consistent throughout the day landing pretty much all his tricks and sending the crowds crazy on the beach with his soaring megaloops. He had his game face on for this competition, and he wasn’t going to let the championship title slip away again.

The last finale of the entire event kicked off with 'Cozzolino Airlines' flying through the sky, landing a textbook megaloop. Airton had his feet firmly glued to the board during the heat, landing trick after trick.

It looked like the pressure might have gotten to the young Brazilian slightly as he struggled to land all his tricks. Gabriel put on an incredible show today but could not match Airton's style, and power.