Couple days ago when I was packing my kite I noticed a severely burned bridle line where the metal pulley sits. I have been using my 7m and 9m for 6 months and both have the same problem. 7m is more damaged as I was riding it more than my 9m. The bridle line where the metal pulley slides is "reinforced" on around 30cm length and it's that outer layer that is completely worn out on the left side and soon to be on the right. Now the pulley eats into the main line underneath.
Today I went to local fone dealer and they said they have already seen this demage before on other 2022 fone kites. They did not have any replacement on hand and told me they could order some for me to buy but best if I go to a local kite repair shop and make a custom line replacement there.

How do you people feel about it? Do you think it's normal wear or a weak part from beginning? Do you have the same problem? 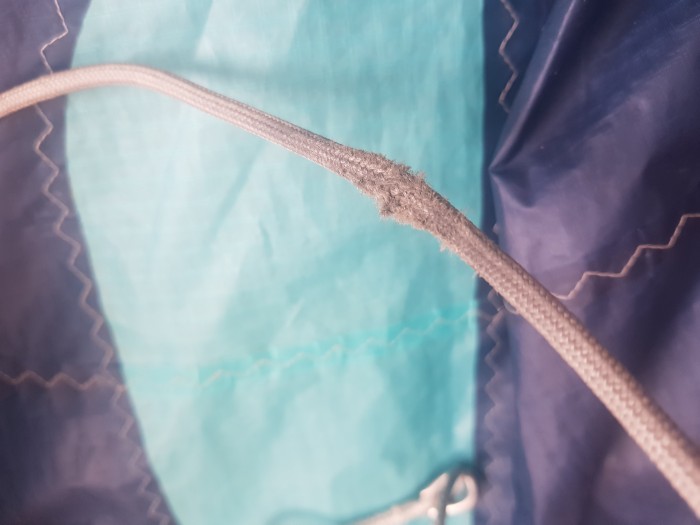 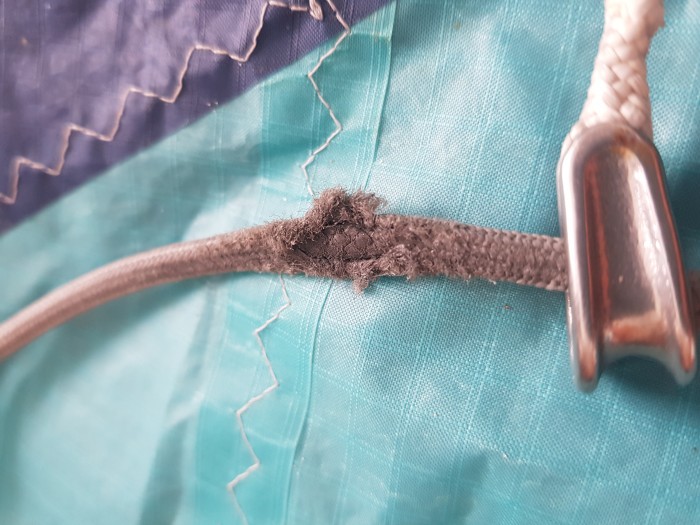 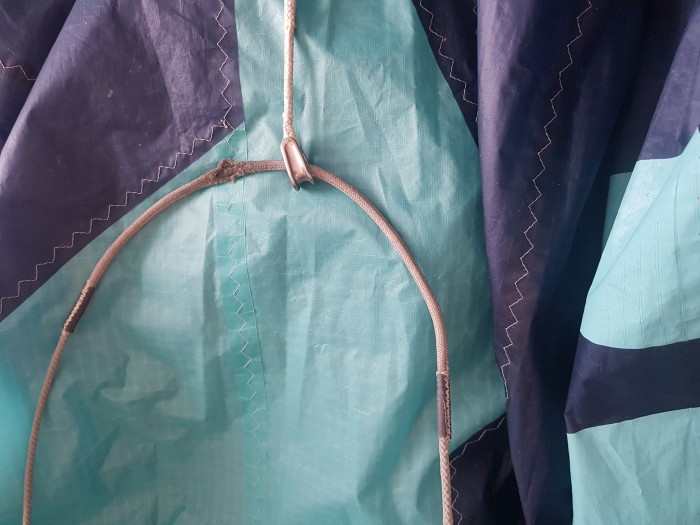 Maybe find the maximum travel for the pulley and larks head in a short piece of more wear resistant line so it is easily replaced?

Worn out part of the line is very short which looks a bit weird. So travel of the pulley seems to be very short.

All LEI bridles are very simple, no matter if they have pulleys or not. Bridle of the Rebel has some effort though being a six-point one. Bandits used to have extremely simple two-point bridles which were laughable but kites still flied

If you flown those kites ALOT then its about the same time my old 2013? bandits had. They had plastic pulleys that also ate through the bridle over few seasons. Same as 6 month intense use. If not used alot then its pretty bad!

I bet you can even convert it to fixed bridle with such short pulley movement. Just take the middle of the wear as the point where the pigtail attaches. Did this with a Peter Lynn Hook without any issues.

Those "fixed bridle with a slider" designs are the worst for wear as it doesn't move enough for a good pulley to roll itself free from sand and a slider moving back and forth 2cm is also not ideal. But a bridle with a slider is easier to design I guess as it finds the best setting on it's own and is less sensitive for any lines that are out of spec.

The choice of that double braid or sleeved line exposes the wear you might expect for that amount of use. The outer may be abrasive resistant but it can only be so thick. If the line was a single braid it would probably still have the same amount of wear but the wear would probably look less obvious and less catchy. You could modify it to make that section easily replaced. Kind of is what it is imho, pros and cons!

PS check your sliders for sharp edges and burrs.

I would replace those sliders with with orbit block with bearings and the line with Amsteel just make sure you don't change the overall length. I had a Star kite years ago that was really bad for destroying pulleys the orbit block with ball bearings made a huge difference no more wear.

Brand Affiliation: None
Has thanked: 8 times
Been thanked: 6 times

same problem here. I use the 12m most of the time and after 9 months my bridles have the same problem. my 10m and 8m, are 3 months old are kites and starting to show the same flaw. the local dealer has already asked F-One a replacement under warranty.
unfortunately the problem is not the replacement per se, but F-one has to come up with a structural solution. in fact, the slider is connected directly to the front line and, if it breaks, your have 50% that it was your safety line. 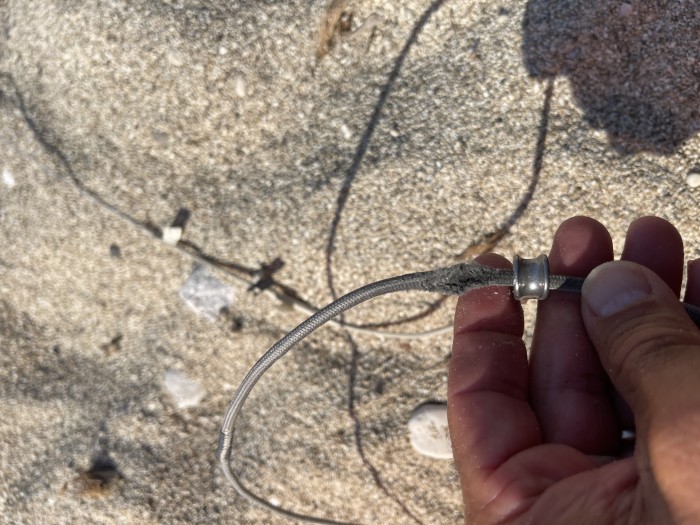 Brand Affiliation: None
Has thanked: 8 times
Been thanked: 6 times

I talked with a guy from F-one. it looks like this was a problem they had with the first production batch, then they changed something and the new bridles should be ok.
I'm now waiting to receive my replacement to see what they changed.

Been kiting off and on for awhile. I don't understand how certain company's that have basically not changed a kite design in 10+ years has these problems. Cabrinha has the same old switch blade but it works. There is not a good excuse of why your kite has simple flaws after running it so long. I'm on an rs quiver now with pulleys, the cheapest/ great quality kite company out there. My bridles are not worn, it's a design issue, pulley issue, don't know the kites but there is enough stuff to worry about in kiting than in 22 having a kite with flaws straight from the factory paying lots of money