Fuselage - which one for DIY wings?

Fuselage - which one for DIY wings?

If you were starting over and decided to make your own hydrofoil wings, which fuselage system would you choose?
Top


I won’t ever buy another m6 connection (unless it’s behind the mast connection).
Top

Build your own.
Top

I built a few fuselages. The easiest one is the Liquid Force design it's just a stick with some holes pretty easy to DIY. Also easier when you build the wings. I made one for Moses Wings and it was really hard to get the curve for the wing perfectly.
Top

Thanks to everybody for info and advice. My conclusion is that it is a choice between keeping it a simple to make stick with flats, or go for possibly the stronger system which seems to me to be a mono block approach which connects direct to the bottom of the mast or even making the whole fuselage integral. To me having a socket style joint with clearance fit rather than taper will still be relying on pinching up mating surfaces with bolts. Trouble is I have not seen many up close and personal.
Top

Hi,
just a simple question. Do you have already a foil rig you are riding or would you have to buy mas and Fuse - to start or you dont want to have it any more?
I ended up with the conclusion that its nice to have a plan B in case you mess up things or they do not turn out the way you want.
If you do not have anything as a back up then you sit on the beach and watch. This scenarion is not so unlikely.
If you have mast and fuse, why wouldn´t you want to to use it?
If you do not have and want to learn - dont try to DIY to learn on it! Do it in parallel - it more satisfying cause you have less stress more water time and you learn faster.

The hexagonal joints you see with some compannies are def. not.
To the suggestion of Gong - I would opose that you have much more work becaust you have to make a form for and the sleeve for the front wing.
Anything without like SAB or Axis you can incorporate the base in the core or neg. form and then just ave to drill holes.
You could use the gong fuse as a lamination core. It is still some work and you do not have the possibility to shim the result, which might be handy due to beginner intollerances or just to see if the result can be pimped by eg more angle.

You do anyway not DIY in this area to save money. Get something 2nd hand if possible that works for you while you tinker your life away and that is suitable for an easy DIY Wing solution.
The cool thing is that you have then also a references on how it works.

Second, I have one attempt on a DYI fuse where i thought its quite sufficiant regarding laminate thickness and materials. It was not and broke surprisingly fast. So more than one iterations are likely unless you are not a experiences engineer and craftsman.
In my humble opinion, it is the most dificult part in the system since the there is much torque on it and it has depending on the design lots of load peaks at the mast and frontwing connection.
Hand lamination is a no, even normal vakbag can create wrinkles. For propper results you should infuse.
Top

Thanks for your intuitive and well thought out post. In answer to your question, I have lots of alternatives both land and water based. Really I am only slowly getting into hydrofoil because it comes fairly low on my list of priorities but it may well develop in time, particularly if I decide to relocate to a less demanding spot.

Hopefully I am a better engineer than communicator as my original question could have been more specific! My hydrofoil gear is old and would benefit from updating. What I am wrestling with is what to spend money on if I were to commit and update my hydrofoil gear. I never see myself making masts or fuselages, infusion gear, autoclaves, presses are not in my play book. However, I might want to dabble with vacuum bagging, peel ply etc to make wing’s.

Thus I wanted to identify a fuselage that firstly, performs well but secondly, has a wing connection system which could be easily reproduced on a diy basis. I was half expecting peeps to say something like the Axis system but then realised, after some research, that even the spade end of that fuselage is not a simple flat.

If nothing else I have learned a lot about the fuselage market and your points about allowing for shimming and adjustment is particularly relevant if you are trying to get the best out of a diy wing. If anything it has probably pushed me towards thinking life is too short to spend the time required in the workshop but time will tell! Thanks again for your thoughts!!!
Top

>> If anything it has probably pushed me towards thinking life is too short to spend the time required in the workshop >>
YESSSS - I have been tinking about that quite a lot. Theoretically I would do better to spend the time in the Gym to be better prepared for longer sessions...

But then isn´t life too short, too, for simply rational behaviour;-)
Can t suppress the the ideas pushing throug my mind so I try to find some ballance and doing some stuff that does cure the itch

Regarding the not flat axis spade... The curve is not realy the problem. If you have the original fuse, you can use that as a template by pressing it against a resin microbubble mixture - propper fixture in all direction given.
If I had to shoose I would go for SAB or Fanatic likes. The inset of Axis is too much work.
For SAB you could do the wing without any additional changes except the drillings, Laminate it in one and then put the addaption from wing curve to fuse on top of it.
If it turns out not hard enough then you still can put layers on top of it.

I did a thread on diy fuselages about 2 years ago on here. I picked the Gong as easiest. I made front end gong compatible and rear end I used a titanium 12mm rod on, going out to the stabiliser. I got it working fine but even with a snug fit and tightened M8 bolts both underneath and on top through my early 2650 sqcm wing, it would loosten.
All my new wings I designed to fit the Axis black fuselage. The joint is a bit funky, if I was designing it I'd taper it thinner towards the front but it is very secure with the 2 x wide M6 screws and the 2 x M8 screws at the back of the front wing connection. I'm over 100 KG so more delicate riders may be able to get away with less secure connections but I've had over a year on mine now and it's still going strong. I did have to helicoil one side but that was because my wing thicknesses and bolt lengths are not as uniform as Axis ones.

Note that after my only CNC cut plywood wing, all the rest of my wings were initially 3D core with cubic infil, and later as I made faster higher performance designs, I only used my 3D prints as models and made clamshell moulds around them for carbon fiber loading later. 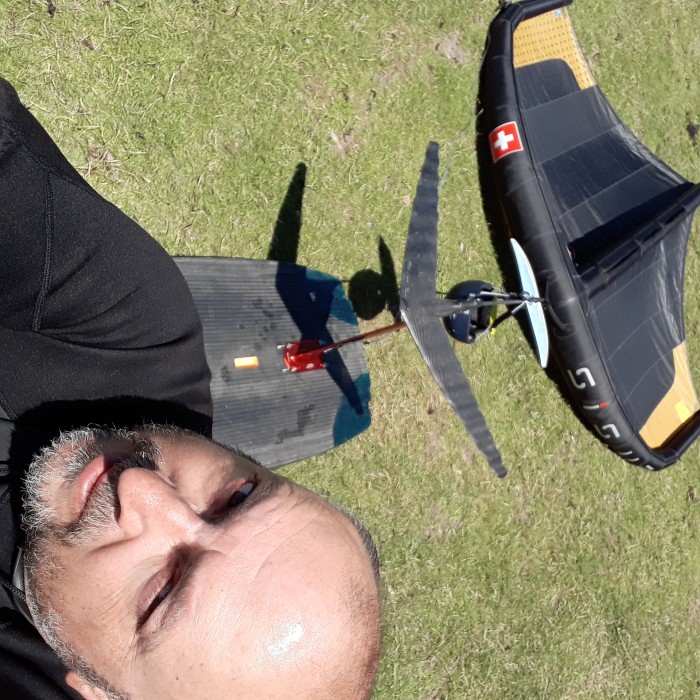 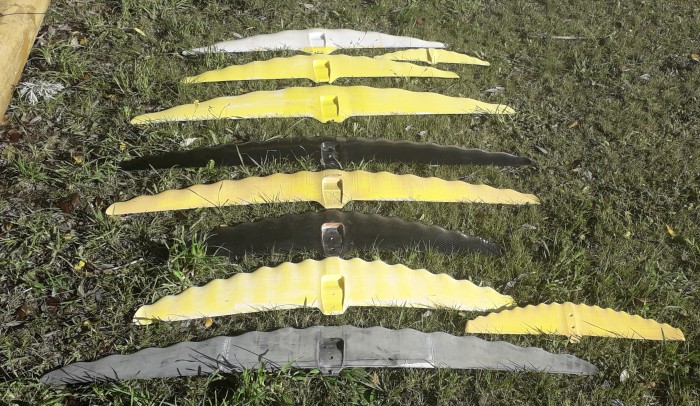