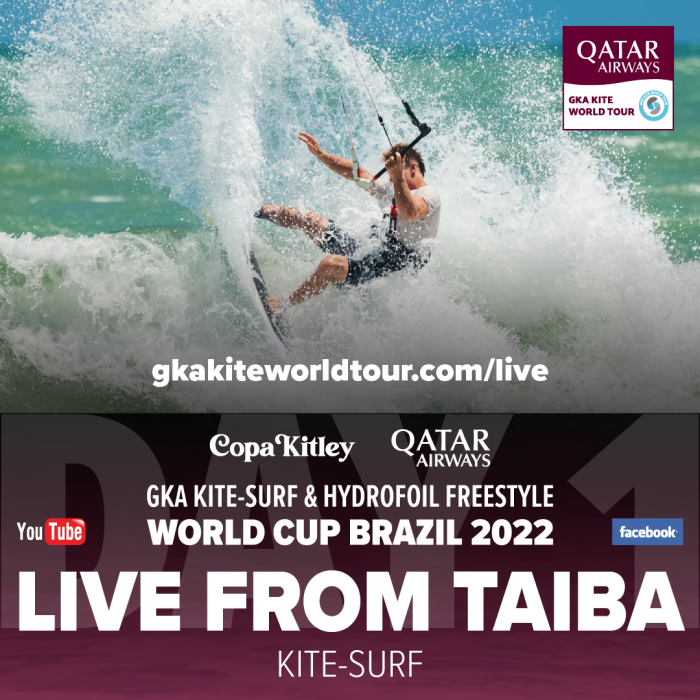 Following on after the amazing Freestyle-Finals that ran on Taiba lagoon earlier this month, now it's the turn of the Kite-Surf and Hydrofoil-Freestyle riders to decide their World Champions at the final event of the season.

The livestream will begin today in a minutes with the first action. Find updates on the liveticker on the Kite-Surf event page.

Both the Kite-Surf and Hydrofoil-Freestyle disciplines got the men's early rounds underway on day one yesterday.

The Brazilian locals stole the show in Kite-Surf in early afternoon. Then, as the tide pushed super high and conditions became less and less suitable for the wave riders, the focus switched to the Hydrofoil-Freestylers to complete rounds one and two.

Suddenly, the action was all about big airs, spins grabs and even handle-passes!

WOMEN TO GET UNDERWAY ON DAY THREE (FRIDAY)

The women will get their campaign at this final event underway on day three today and then later in the day the focus will move back to the men.

The women's world title scenarios are open after just one event:

The championship now comes down to Matchu Lopes chasing James Carew down, but he needs James to lose in the semi-finals.

Matchu came through a tight quarter final against Nicola Abadjiev. Clearly down about his performance with several missed tricks, Lopes hopes that was just an 'off-day'.

Matchu will ride in the first semi-final against Pedro Matos. If Matchu loses that heat, the Championship will be James Carew's.

But... if Matchu beats Pedro, the pressure shifts to the second semi-final.

Regardless of what Matchu achieves, though... if James Carew can beat the highest performer of the event, Brazilian Gabriel Benetton in the second semi-final, then the Australian will be assured of claiming back-to-back World Championships.

Should Gabriel beat James in the second semi-final and Matchu goes on to win the event, then Matchu will be top of the world for the second time in his career, having previously won the first GKA Kite World Tour title in 2016.

So... is there much riding on all this then? You bet there is!
Top 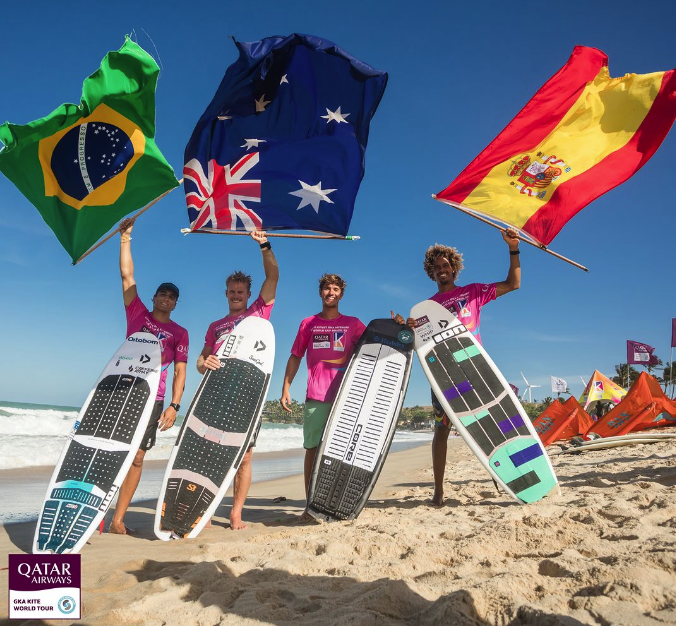 
The last wave of James was just a perfect example of ultimate power surfing and shows just how much of a competitive beast he is, in terms of both pure wave attack and freestyle. He is the most all-round and highly charged riders and well deserving of this event win and world title. Coming from behind in this final, as he did in the semis, you just cannot rest against this man until it's all over.

Pedro is right where he should be – making it to the final of an event that rewarded pure surf-style attack and power and this was a closely matched heat, right up to the end. Both riders claimed waves in the final moments that could have forced the win. But in the end, Carew's extra fire power, drive, hunger, total focus and, hard work in training freestyle moves (another frontside 3 in the final) brought him the win here and his second world title in this combination wave and strapless freestyle world tour.

James: “That was insane. Came here for the win and the world title and I got them both. Smoked them, it's over. Going home happy, bags full, that's it! Got to get another one now. Three from three?”

Pedro: “Competing against James always hard. The high tide was much harder. I won the Brazilian championship and now in the final, it's going good.”
Top