Any reviews of 2023 Slingshot Hope Craft or Travel Craft?

Any reviews of 2023 Slingshot Hope Craft or Travel Craft?

Anyone have a chance to ride these boards yet? I'm looking to downsize to a smaller board this season.

Brand Affiliation: None
Has thanked: 28 times
Been thanked: 37 times

Thanks for sharing this review. Sounds good...

I have ridden foil boards from Liquid Force, Kanaha Shapes and Slingshot. I’ve owned several boards from each, and currently own one KS board—the 47” model--and two Slingshot Dwarfcraft—a 120 and a 100. The 100 Dwarfcraft is currently my primary board, and I’ve ridden it quite a bit this season.

I was lucky enough to try the new foil board from Slingshot this last week—the 103 Hopecraft. This is the new high performance foil board from Slingshot due to be released any day. First off, let me say that I am not affiliated with Slingshot. The board was loaned to me, not given. I’ve already—sadly—returned the board. I was fortunate to meet Fred Hope and talk about the new board. It’s 103 cm long vs the 100 cm Dwarfcraft. It is about 3cm—I didn’t measure the width—narrower. It has more volume, 15L vs 11L, with significantly more volume in the nose compared to the 100 DC. The volume serves two purposes, it stiffens up the board and makes light wind water starts easier. There are considerably fewer inserts, but should still allow most any strap configuration. I personally ride with one front hook. The front insert placement allows the front hook to be placed about 3 or 4 cm further forward from the kick tail than the 100 DC. On the bottom the foil mount placement remains the same, although the entry notch is now at the rear of the tracks. This allows the T-nuts to be pre-installed on the mast before mounting on the board. The kick tail has a steeper angle than the old board, which makes it more prominent. There is no leash plug where as the 100 DC has a leash plug in the nose. I weighed my 100 Dwarfcraft and the Hopecraft; the Hopecraft came in about .3 pounds heavier. According to Fred, the 103 Hopecraft is stronger than the Dwarcraft and will withstand more of the kind of abuse riders like Fred Hope can dish out. That won’t be an issue with me LOL!

I’ll admit, I was skeptical about the new board being easier to waterstart in light winds. I thought the narrower width would overshadow the extra volume. I was also concerned that with the entry notch requiring a slightly more forward mast placement I wouldn’t be able to keep my rear foot against the kick tail pad—which is my preferred stance. I ride with my feet on the rails, and I assumed that the narrower width would be an issue as well. I was relieved of all concerns after riding the board.

I rode the board with a 6m UFO in conditions varying from floating in the water waiting for enough wind to start, up to the mid 20s steady state with gusts in to the 30s. I was riding a Phantasm 684 wing, a 92 Phantasm mast, a Stringy fuse along with a custom stabilizer. I weigh 185 pounds.

My very first impression on my first waterstart was “I like this board!” I was able to place my rear foot against the kick tail and put my toes under the hook, which is my preferred water foot placement. The more prominent angle on the kick tail made it easier to find and kick the board around. The more forward placement of the hook gave me more control and was a more comfortable stance. Later waterstarts in extremely light wind verified that light wind waterstarts were immensely improved over the 100 DC. I’d liken light wind water starting the Hopecraft to the 120 Dwarfcraft or the 47” Kanaha Shapes.
Once I was up on foil with my foot out of the hook, the board really came into it’s own. Linked turns became much faster. I could snap the board over quicker and more confidently. My turns became sharper and shorter. Very, very nice. After a time I noticed that I was having to make fewer minor corrections while riding and I was able to loosen up a bit. This had an immediate impact on rider fatigue. I work out my legs pretty hard on my bike 6 mornings a week, so I already have some leg burn going on when I start to kite. Typically, my legs start to tell me it’s time to quit about 15 miles into my foiling session. On my first ride on the Hopecraft I rode over 22 miles—even then I only quit because I was getting chilled. And that was after setting a personal record for both time and power output on my 11 mile bike ride that morning. So, better turns, better cruising, better water starts. Better. Much better.

One word about swing weight. I did not notice any difference between my 100 DC and the Hopecraft. You’d think I would because of the 3 cm length increase and the .3 pound weight increase. However, I think that maybe removing all of those inserts actually balanced the weight in the board better? This is only a guess on my part; all I know for sure is that I did not notice an increase in swing weight, and I could maneuver the Hopecraft faster due to the increased stiffness.

The 100 Dwarfcraft has been my favorite board all season. I love that board. This year I brought two boards to Baja, a Dwarcraft 100 and a bigger board for those sub 10 knot days. (I’m not going to say here if the big board was the 120 Dwarfcraft or the 47” Kanaha shapes—both of which are outstanding boards.) This year I’ll be bringing one—the 103 Hopecraft. As soon as I can lay hands on one, the Hopecraft will be the board I ride every day. ‘Nuff said.

EDITED TO ADD: Two things I forgot to mention. First, the 103 Hopecraft has less drag than the 100 DC during inadvertent touchdowns. It "bounces off" the water better whether you touchdown straight down or contact the side of a wave. Second, the 103 has a slightly more pronounced concave deck than the 100 DC."

Just got in my new Hope Craft after reading the reviews. 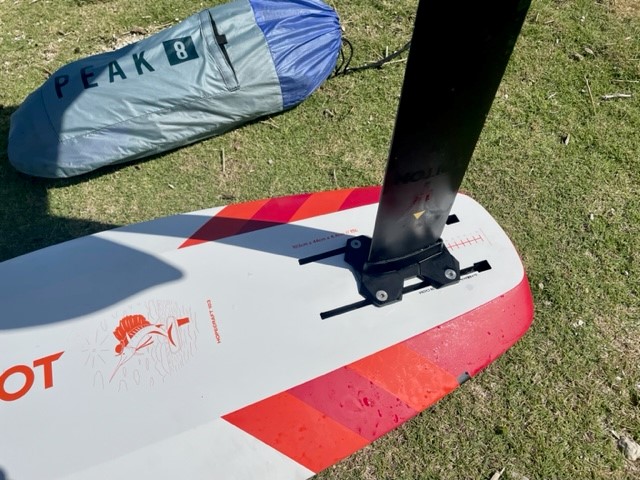 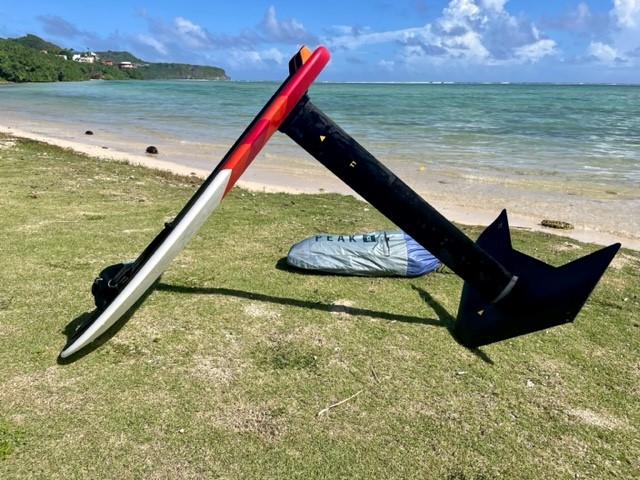 Ok so I've had a couple of sessions on the Travelcraft V1, as a comparison I've been riding the Dwarfcraft 100 for two years.

First impressions count, mine was wow this little thing is fun. when rolling it up on its side you can feel the thickness but. being the same volume as the DC100 it had to go somewhere. it's thicker all over and I'm going to say just a bit thicker toward the nose.
Im riding it with a 102 cm mast and short fuse, the PTM front wing at 952 cm makes it lively.

If you have exceptionally big feet (greater than size 10 Australia) you might feel like the tail is too narrow.

i have a narrow stance (strapless) and have found my front foot is right where the foot strap inserts are.

Its very lively and certainly not an entry level board.

I don't have any worries about light wind starts as I feel its more technique than board that matters, in saying that I don't enjoy sub 10 knots and very rarely bother with wind in that range.

Touch downs well yes it does bury the nose but I have been able to recover 99% of them due to the lack of nose length.

The tracks out the back are great it makes for easy pack up.

All in all a fun little board. 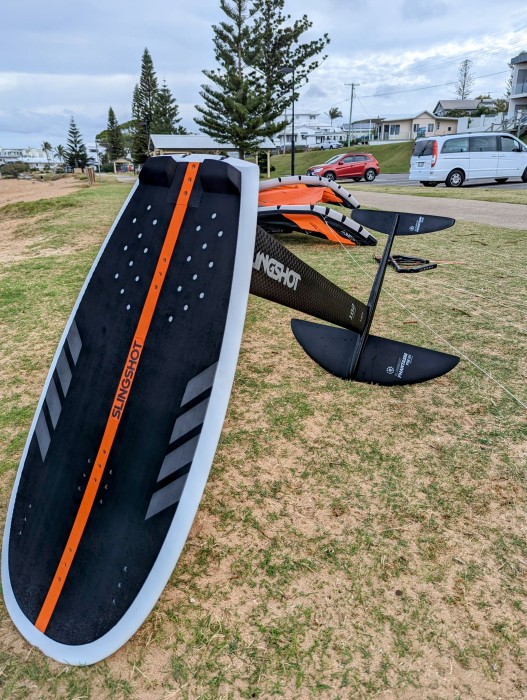 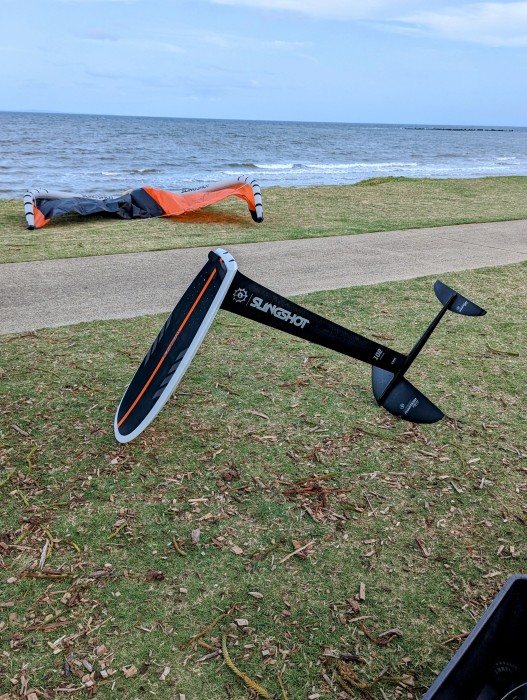